A new Monmouth University poll indicates another competitive special election is coming up next Tuesday, this time in Ohio's 12th congressional district. The Republican nominee, State Senator Troy Balderson leads by just one point over Democratic nominee Danny O'Connor, who is the Franklin County Recorder. Monmouth's prior poll of the race had Balderson up by 10%. Other recent polling has also shown a close race, although

The seat has been vacant since January, when former Rep. Pat Tiberi resigned his seat. This Central Ohio district leans Republican - Tiberi won reelection by 36% in 2016, while Donald Trump defeated Hillary Clinton by 11%. It has not elected a Democrat since 1980.

Regardless of who wins on Tuesday, these two will meet again in the November general election for a full two-year term in the 116th Congress that begins in January.

We've added a new 'tilt' ratings option on the interactive maps. It is currently available on the gubernatorial maps, with Senate and House to follow in the near future.

The tilt rating sits between toss-up and leans. The forecaster Inside Elections uses this designation for races that are highly competitive, but where one party has a slight edge. Among the 36 gubernatorial contests in 2018, they currently rate Michigan and Nevada as Tilt Democratic, with Alaska and Ohio Tilt Republican.

The current Inside Elections map follows. Use it as a starting point to create your own 2018 gubernatorial forecast: Georgia Secretary of State Brian Kemp moved on to the general election after easily defeating the state's Lt. Gov. Casey Cagle in Tuesday's Republican gubernatorial runoff election. Recent polling had indicated that Kemp had moved ahead in the race, but none foresaw Kemp's 39% margin of victory.

Kemp will meet Democratic nominee Stacey Abrams in the general election. Abrams is attempting to become the first black female governor in the nation's history. The most recent poll of the race, conducted by SurveyUSA, showed Kemp with a two point lead, well within the margin of error. It will be interesting to see if/how that margin changes now that the GOP nomination has been decided.

In the 6th district Democratic runoff, gun control advocate Lucy McBath defeated businessman Kevin Abel by 7.5%. McBath meets incumbent Republican Rep. Karen Handel in November. Handel will be seeking her first full term after winning a high-profile special election over Jon Ossoff in 2017. Handel will start out the favorite; although this is likely to be one of the most competitive districts in the state.

Meanwhile, in the 7th district Democratic runoff, college professor Carolyn Bourdeaux edged businessman David Kim for the nomination. Bourdeaux will face off against Republican Rep. Rob Woodall in November. This district is seen as a tougher 'get' for Democrats - Woodall is a four-term incumbent who won re-election by 21% in 2016. Trump won here by 7%, while his margin in the adjacent 6th district was under 2% over Hillary Clinton.

Gubernatorial and Congressional Runoffs in Georgia Tuesday: Overview and Results

There are three runoff elections of note in Georgia Tuesday. Republicans will choose a nominee in the gubernatorial race, while Democrats will go to the polls to do the same in the state's 6th and 7th congressional districts.

Polls close at 7:00 PM. Results will begin to appear on this page shortly thereafter. Reload for the latest updates.

In the gubernatorial race, Republican Lt. Gov. Casey Cagle faces off against Brian Kemp, the Secretary of State. Cagle received more of the vote (39% to Kemp's 25%) in the May 22nd primary and also led in early runoff polling. However, two of the most recent polls have Kemp well ahead by 18 points, while a third has him up by 6%. Kemp was also endorsed by President Trump in a tweet last week.

The winner will meet Democratic nominee Stacey Abrams in the general election. Abrams is attempting to become the first black female governor in the nation's history. The most recent poll of the race, conducted by SurveyUSA, shows a surprisingly competitive race in a state that last elected a Democratic governor in 1999.  Both Cagle and Kemp lead Abrams by 2 points, well within the margin of error. The consensus view of the general election is likely Republican, although that may change if Kemp wins the nomination; as Cagle is seen as the stronger general election candidate.

Turning to the House of Representatives, Democrats will choose a nominee in runoff elections in two Atlanta-area districts. Both GOP-held districts are the only two potentially competitive general election districts in the state, although the 7th is more of a reach for Democrats.

In the 6th district runoff, gun control advocate Lucy McBath squares off against businessman Kevin Abel. The winner will meet incumbent Republican Karen Handel in November. Handel will be seeking her first full term; she won a high-profile special election over Jon Ossoff in 2017.

Meanwhile, in the 7th district runoff, it is a college professor, Carolyn Bourdeaux up against businessman David Kim for the nomination. The winner will meet Republican Rep. Rob Woodall in November. This district is seen as a tougher 'get' for Democrats - Woodall is a four-term incumbent who won re-election by 21% in 2016. Trump won here by 7%, while his margin in the adjacent 6th district was under 2% over Hillary Clinton.

The 'color chooser' option has been added to the House and gubernatorial interactive maps; this feature was launched on the Senate map in June. Previously, the only option for creating your map was to click or tap a state or district repeatedly until arriving at the desired rating. This can be a bit cumbersome if you are building a map with all seven available ratings.

The new Color Chooser allows you to select a color/rating such that only one click is necessary on a race to get the desired rating. Check it out in the short video below.

More information can be found here.

We've relocated the information for House incumbents to make it easier to view while you are interacting with the map.  This data now appears below the Map Color Palette to the right of the map. You will see the information box as you hover over a district, or tap once on a mobile device.  A tablet screen or larger is recommended for a better experience with the House map. 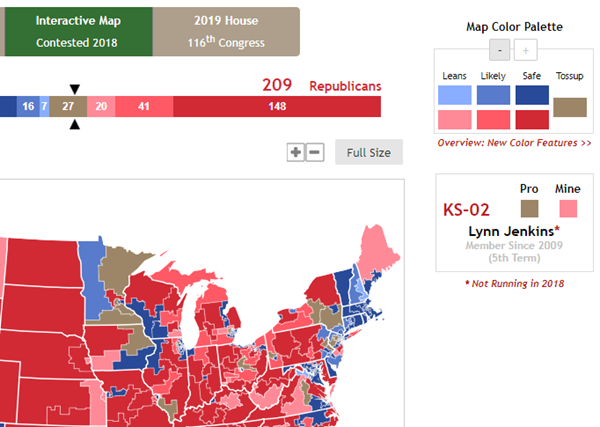 Coasting to this easy win, Roby appears to have gotten past the issues around her loyalty to President Trump. Those hindered her re-election campaign in 2016, where she won by only 8% in this very conservative district. Roby will be the prohibitive favorite over Democratic nominee Tabitha Isner in November.

Next Tuesday, there are two runoff elections in Georgia. In the gubernatorial race, Republican Lt. Gov. Casey Cagle faces off against Brian Kemp, the Secretary of State. Cagle received more of the vote (39% to Kemp's 25%) in the May 22nd primary and also led in early runoff polling. However, the race appears to have tightened and could go either way. The winner will meet Democratic nominee Stacey Abrams in the general election.

In Georgia's 6th congressional district - one of the only potentially competitive general election districts in the state - gun control advocate Lucy McBath meets businessman Kevin Abel in a runoff for the Democratic nomination. The winner will meet incumbent Republican Karen Handel in November. Handel will be seeking her first full term; she won a high-profile special election over Jon Ossoff in 2017. 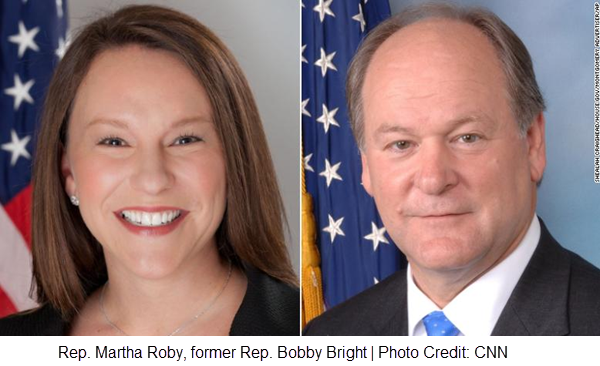 Note that the above narrative is as of July 13. As the forecasts evolve in the months ahead, the images in this article will update to reflect the then-current outlook. 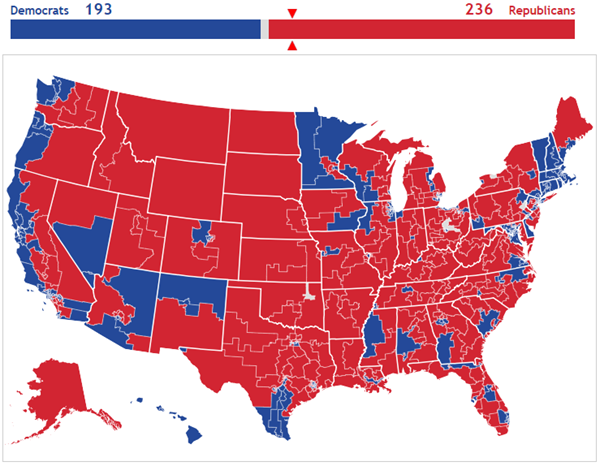 President Trump will nominate Brett Kavanaugh to replace Anthony Kennedy on the Supreme Court. Kavanaugh is a federal appeals court judge for the District of Columbia Circuit.

The U.S. Senate will need to confirm Kavanaugh. Given the importance of this nomination, we've compiled a list of contact information for all 100 U.S. Senators. This includes mailing address, phone, email and social media. We've also included some related election filters. 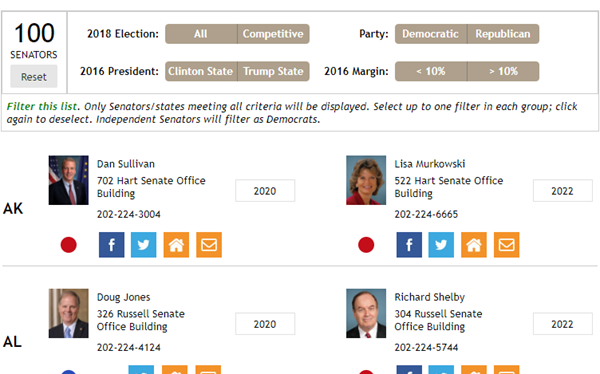