The Nevada Democratic caucuses will continue into early evening, although results are starting to come in. We'll report the final results when available; here's a few other options to 'watch' the returns online:

NBC News: In addition to displaying the vote percentages, this page includes the results of entrance polling being conducted throughout the day. A good way to see how different demographic groups are voting.

Decision Desk HQ: This site gathers results via a network of volunteers, often calling races before the networks.

NVcaucuses: The Nevada Democratic Party is presenting results here. This site seems to be intermittently offline this afternoon.

The South Carolina polls close at 7PM tonight. Donald Trump is expected to win, although the most recent polls have hinted at a tightening race.

South Carolina Republicans and Nevada Democrats will weigh in on Saturday as to who should represent their respective parties in the 2016 presidential election. The recap below includes polls of which we are aware through about 8AM ET on Friday.

South Carolina Republican Primary is February 20. There are 50 delegates, allocated on a winner take all basis (some statewide, some to the winner of each of the state's seven Congressional Districts).

There have been about 15 polls over the past week and, aside from a couple outliers, the results have been pretty consistent. Looking at the current 270toWin South Carolina average, Donald Trump appears poised to pick up the majority of the state's delegates. He's averaging about 32%. Ted Cruz and Marco Rubio are battling for second, with Jeb Bush, Jon Kasich and Ben Carson tightly grouped for the fourth spot.

Nevada Democratic Caucus is February 20. There are 43 delegates, allocated proportionately (some statewide, some in each of the state's four Congressional Districts).

Polling in Nevada is much more limited than in South Carolina, but what there is indicates a close race. Our Nevada average shows just 1.4 points separate Hillary Clinton and Bernie Sanders.

Nevada Republicans will caucus on Tuesday, the 23rd. Again with very limited polling, Donald Trump appears to be well out in front. The state's 30 delegates will be allocated proportionately.

South Carolina Democrats will hold their primary next Saturday, the 27th. Hillary Clinton looks to have her easiest victory thus far, she's averaging about 25 points ahead of Bernie Sanders. The allocation process is proportional (statewide and Congressional District), with 59 delegates available.

Looking ahead, Super Tuesday, March 1 will quickly follow. Over 25% of Republican and 20% of Democratic delegates will be available that day. Note that in some caucus states, such as Colorado, the date marks jus the beginning of an allocation process that could stretch over many weeks.

Clinton Leads By Double Digits in Most Early March Primaries

Public Policy Polling has released the findings of Democratic polls conducted in 9 states that will hold primaries on Super Tuesday, as well as Louisiana (March 5), Michigan and Mississippi (March 8). 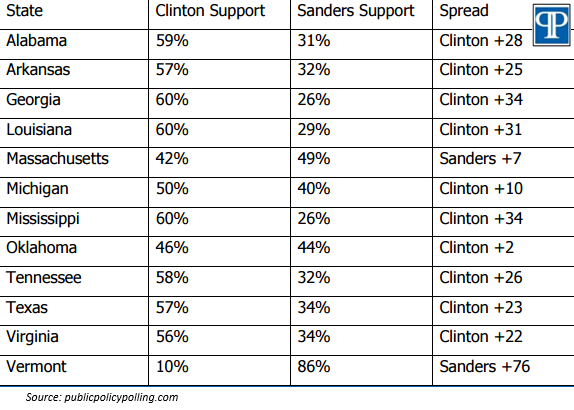 The 9 Super Tuesday primary states have 835 delegates up for grabs, 17.5% of the Democratic total. It is worth noting that Democratic Party allocations are proportional (some statewide, some by Congressional District), so Sanders should still receive some delegates even where he loses by 20 points or more. On the other hand, with a 15% Party minimum threshold, it is possible that Clinton will receive none of the Vermont delegates. 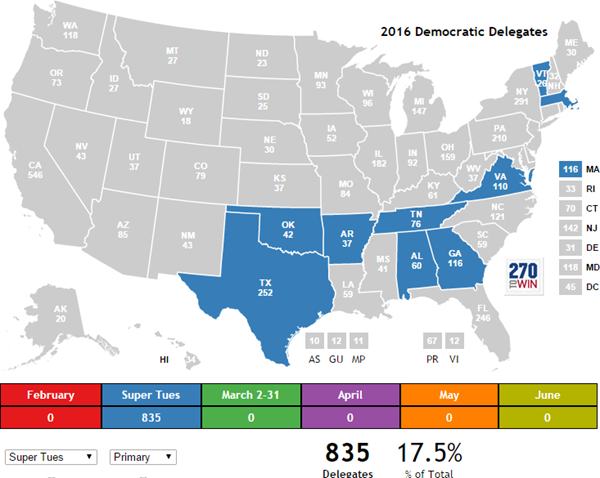 Colorado, Kansas, Maine, Minnesota and Nebraska will hold caucus events (which are often just the first step in the delegate awarding process) in this same calendar period. These states were not surveyed.

CNN Poll Matches Others This Week with Trump, Clinton Well Out in Front in South Carolina

A new CNN/ORC poll out this afternoon shows Donald Trump with a 16 point lead over his closest rival, Ted Cruz. Trump's 38% in the CNN poll is pretty close to what he has seen in other polls out in recent days.

It has been a while since CNN polled the Palmetto State, with their last survey in October. Interestingly, not much has changed since then, except for Ted Cruz, who rocketed from 5% to 22%. The Texas Senator's gains appear to have mostly come at the expense of Ben Carson.

The two CNN polls are compared in the image below. Select the image to see all recent South Carolina polling. The Republican primary is this Saturday, February 20. The state is exempted from Republican rules on proportional delegate allocation prior to March 15; about half the 50 delegates will go to the winner of the state, with the remainder based on the winner within each individual Congressional District.

On the Democratic side, CNN shows Hillary Clinton with an 18 point lead over Bernie Sanders, 56% to 38%. Clinton's lead has narrowed quite a bit since October, when she led Sanders by 31 points. Nonetheless, the former Secretary of State looks to cruise to a fairly easy victory on February 27th. The state's 59 Democratic delegates will be allocated proportionately, mostly by Congressional District. 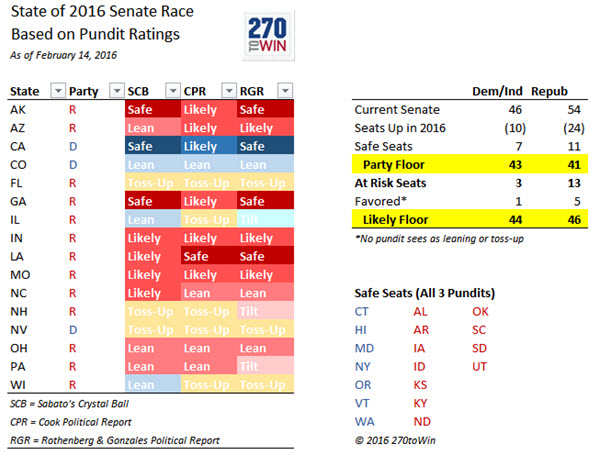 Justice Antonin Scalia, who served nearly 30 years on the Supreme Court, was found dead today at a resort in Texas. He was 79. The vacancy has huge implications for the 2016 presidential and Senate elections.

According to a guest on MSNBC (no link available), Republican-appointed justices have been in the majority of the Court since 1972.

The president nominates Supreme Court justices, who must be confirmed by the U.S. Senate.

The Court is ideologically divided 4-4 with the vacancy created by Scalia's passing. We obviously have a presidential election this year, and 34 U.S. Senate seats are up for election. The presidential race is likely to be competitive, and it is also close to 50/50 as to who will control the Senate.

This creates an interesting 'game theory' situation. Does President Obama nominate someone now, knowing that if he name someone with his ideological view, that person would have a very difficult time getting confirmed in a Republican-controlled Senate? Or does he nominate a moderate, hoping that person can get approved?  Both parties will be reading the tea leaves as the year goes on.

For example, Republicans are already saying (McConnell, Cruz) that the appointment should wait until a new president is in office. However, if it becomes obvious that Democrats will win the White House and take control of the Senate, they might become more accommodating to an Obama nominee as the year goes on.

Ironically, Senator Cruz's statement could work against him, to the benefit of establishment Republicans, if voters conclude that Cruz or other outsiders like Donald Trump can't win in 2016.

Nevadans may be 'Feeling the Bern' after the Vermont Senator's strong performance in New Hampshire earlier this week. In a new Nevada survey conducted by TargetPoint, Hillary Clinton and Bernie Sanders are tied at 45%. This is the first Nevada poll since late December, when Gravis Marketing found Clinton ahead by 23 points.

The Nevada Democratic caucuses are on February 20. 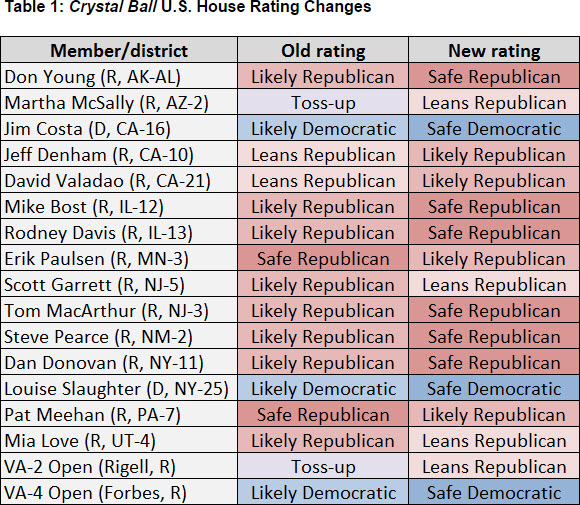 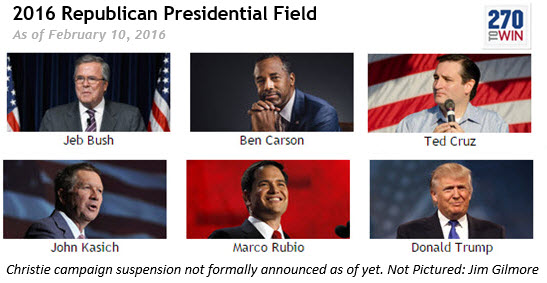 New Jersey Governor Chris Christie is expected to suspend his 2016 presidential bid today; exiting the race one day after a 6th place finish in New Hampshire. Christie received no delegates through the first two events of the 2016 nominating race.