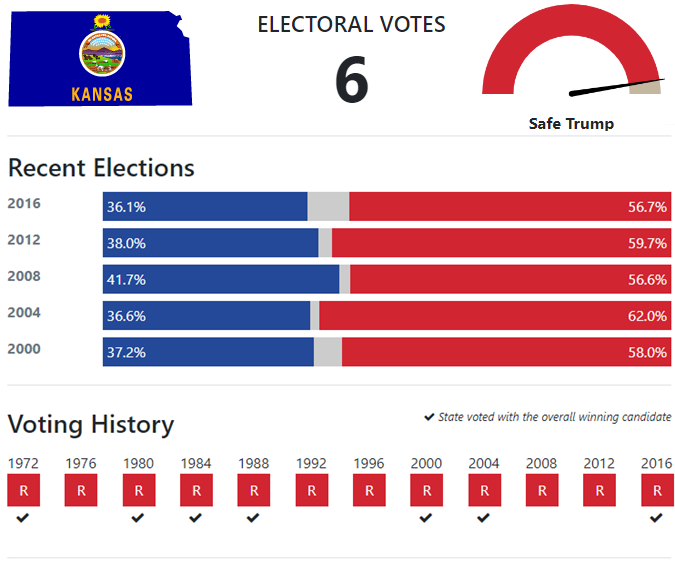 Kansas has been one of the most consistently Republican states since its founding. It has voted accordingly in each presidential election except seven. Its current Republican streak goes back to 1964 and before that to 1936. Kansas also produced some of the 20th Century’s most influential Republicans — Dwight Eisenhower, Bob Dole, Alf Landon among them — yet still elected a Democrat as governor in 2018.

Kansas is also the political and demographic sibling of the state we covered last week, Nebraska. You can find that piece here if you are interested in comparing the two.

In 1541, over 350 years before Kansas would become a part of the United States, a Spanish explorer went to the region in search of gold. Disappointed, the Spanish slowed their exploration through the 16th and 17th Centuries. Then, in 1720, when Native Americans killed a unit of the Spanish military, exploration stopped. France did establish a trading post in 1724, and the two countries alternatively claimed the land until the United States bought it from France as a part of the Louisiana Purchase in 1803. Two years later, that land was organized into the Louisiana Territory and later the Missouri Territory in 1821.

From the 1820s through the 1850s, future-Kansas was reserved as Indian Territory. Native American tribes were squeezed into ever narrower regions as the Indian Removal Act forced tribes from the eastern United States to relocate west of the Mississippi River. Starting in the 1840s, travelers on the Oregon Trail began crossing Kansas’s northeastern corner. Illegal settlers pushed for territorial rights and in 1854, the United States established the Kansas Territory in the Kansas-Nebraska Act. That law is most famous for repealing the Missouri Compromise and allowing states to independently determine the legality of slavery within their borders. The new Kansas Territory comprised modern-day Kansas and parts of Colorado.

Now that the territory was open to new settlers, pro-slavery “Bushwhackers” and anti-slavery “Jayhawkers” moved from around the country to try and influence the impending vote on slavery. The contention turned violent and a period known as Bleeding Kansas began and would continue even after 1859 when Kansans passed a constitution that outlawed slavery. In 1861, Kansas was admitted as the 34th state of the Union, bringing about the end of Bleeding Kansas.

Kansas’s political battle over slavery, however, was a foreshadow of the nation’s. During the Civil War, Kansas fought for the Union and, in its first presidential election, Kansas gave Abraham Lincoln 79% of the popular vote — a higher percentage than any other state.

Over the next three decades, Kansas’s population would explode. Settlers continued to come for the fertile prairie land and friendly climate. Workers found ready employment with the construction of the Kansas Pacific Railroad, a project that brought immigrants and freemen from other states. The population grew from 107,000 in 1860 to 1,428,000 in 1890. More people moved to the state in those thirty years than would do so in the next 110.

In the 1890s, economic depression, low crop prices, drought, tornadoes, and deflation lowered farmers’ incomes and expectations, the latter of which had been inflated by good agricultural conditions of the 1880s. These economic grievances gave rise to the populist movement in Kansas. From 1864 to 1888 Kansas voted, like most of the north, for Republican presidential candidates. But frustrated and indebted farmers voted for Populist Party candidate James Weaver in 1892 and the populist Democrat William Jennings Bryan in 1896. Both candidates supported the coinage of silver, a policy to raise inflation and help indebted farmers.

The famously titled editorial, “What’s the Matter with Kansas”, was written by a conservative Kansan in 1896 arguing against Bryan and populist policies that are causing Kansas to lose “wealth, population and standing.” While the argument won over more conservative voters in small towns, the aggravated agrarian population overwhelmed them, swinging the vote to Bryan.

Kansas next voted Democratic for Woodrow Wilson in 1912 as Republicans split their vote between Theodore Roosevelt and William Taft. Wilson would also win the state in 1916, a reward for keeping the U.S. out of World War I — a policy of particular popularity among the state’s German population.

From there, Kansas’s presidential electoral history is simple: no Democrat would win statewide outside of the massive landslides in 1932, 1936, and 1964. After 1964, all but two Republican nominees would carry the state by double digits.

World War I had pushed Kansans to increase their agricultural (mostly wheat) and oil production. The tapping of the El Dorado oil field near Wichita kicked off an industry that would eventually reduce Kansas’s reliance on agriculture. However, after the war, demand and prices for the still-dominant agriculture industry dropped. The Great Depression only worsened the economic suffering and Kansans supported Franklin Roosevelt’s New Deal efforts to prop up the price of wheat. In 1940, though, Midwestern native Wendell Willkie was able to win back rural, small town areas in the Northern U.S. Through these victories, he was able to bring the state back to its Republican roots even as he lost the election to Roosevelt.

As the country mobilized for World War II, Kansas’s economy shifted. The state was already home to a healthy aircraft industry, but the spike in demand increased production and output. Wichita became known as the “Air Capital of the World” and drove up Kansas’s population and manufacturing capacity. The rise of the aeronautical industry, along with the continued growth of Kansas’s transportation and energy industries, diversified the state’s economy and helped grow the state’s two biggest metropolitan areas — Kansas City and Wichita.

Through the 20th Century, Kansas’s agricultural, transportation, energy, and manufacturing industries reigned. Acting as a crossroads for the country, Kansas City would eventually become one of the country’s largest railroad hubs. Boeing, Spirit Aerosystems, Beechcraft and other aeronautical companies would build their airplanes in the state. Oil refiner Koch Industries continued to expand its headquarters, operations, and political influence there as well.

Apart from this developing economy, Kansas also took part in one of the most influential Supreme Court cases in American History: Brown v. Board of Education of Topeka. Through the mid 1950s, Kansas permitted public schools to be segregated by race. The 1954 decision against the Topeka Board of Education declared the segregation of public schools unconstitutional for violating the 14th Amendment's Equal Protection Clause.

Through the economic and social changes of the latter half of the 20th Century, Kansas remained staunchly Republican.  Only one Democrat — Lyndon Johnson in 1964 — was able to carry the state. Year after year, the state’s more rural western half became staunchly Republican while the more urban east, though still Republican, was more friendly to Democrats. The 1972 electoral map by county in comparison to the 2000 map neatly illustrates this regional sorting.

Since 2000, Kansas has remained consistently more Republican than the nation. It has not, however, been trending towards either party. Between 2000 and 2016, the Republican nominee received between 10% and 13% more of the popular vote in Kansas than they did nationwide. From a bird’s eye it looks like not much has changed within the state over these five elections. In fact, Kansas’s county map has stayed pretty constant. In each of those years, the Republican nominee carried every county except Wyandotte (Kansas City) and Douglas (Lawrence). In 2008, Barack Obama also edged out John McCain in a Crawford County (Pittsburg). Outside of those populous eastern counties, however, Republicans swept the state.

The reality, however, involves taking a deeper look at intrastate dynamics and shifting party alliances. Republicans have been improving their margins in the rural, agrarian parts of the state. Take, for example, the rural Thomas County in the state’s northwest and Neosho in the Southeast. While George W. Bush carried them by 54% and 20% in 2000, Donald Trump did so by 68% and 46% in 2016.

Three of the state’s biggest counties, which make up about 35% of the Kansas vote, are Wyandotte (Kansas City), Johnson (Kansas City suburbs), and Douglas (Lawrence/University of Kansas). Again comparing 2016 to 2000, these counties shifted to the Democratic nominee by 9%, 21%, and 30%, respectively. Some of the state’s other most populous counties — Sedgwick (Wichita) and Shawnee (Topeka) have not shifted far leftward, but instead have grown in size.

The state’s growing urban and suburban areas have shifted decisively Democratic while the shrinking rural areas have swung overwhelmingly Republican. These two trends balance out in the state’s topline results, creating a more polarized Kansas.

The 2018 gubernatorial election, in which Democrat Laura Kelly won, appears shocking given Kansans Republican loyalty. But the state has historically elevated ideological moderates in the mold of Dwight Eisenhower and Bob Dole and, going back to 1957, regularly crossed party lines in gubernatorial elections. In 2010, however, Kansas elected Republican Sam Brownback, who pushed unpopular conservative fiscal and social policies with the help of his Secretary of State Kris Kobach. By the time he resigned to become ambassador at large for international religious freedom, he was the second least popular governor in the country. When Kansas Republicans nominated the extremely unpopular Kobach for the 2018 gubernatorial election, Democrats found themselves within reach of a deep red state’s top job. Kelly, the Democratic nominee, improved on Hillary Clinton’s 2016 margins in every single county in the state and won the election 48% to 43%.

Kobach is trying for higher office again in 2020, hoping to win the U.S. Senate seat being vacated by the retiring Pat Roberts. It is unclear if Kobach or U.S. Rep. Roger Marshall will advance in the state's primary. However, some forecasters see the race as more competitive with Kobach as nominee.   A February poll had him tied with the likely Democratic opponent, State Sen. Barbara Bollier. This is particularly notable as Kansas has not elected a Democratic Senator since 1932, the longest such GOP Senate winning streak in the nation.

Even with this recent Democratic success, however, Donald Trump is a safe bet to win Kansas in November. He is popular in the state and voters are less willing to cross party lines when voting for president. Once again, the topline results in Kansas will probably hide interesting trends. If the state’s growing urban areas begin to overpower the shrinking rural ones and shift the state a few points leftward, it could indicate a future in which presidential Democrats are competitive in the state. That, however, is a long way down the road. For now, Kansas is safely Republican.