With three incumbents going down to defeat in primaries earlier this week, the total number of U.S. House retirements has grown to 58 current members. That's over 13% of the 435 seat chamber.

The list includes 34 Democrats and 24 Republicans. 17 of those are seeking another office, while eight - five Republicans and three Democrats - lost renomination.

Five states hold their primaries this Tuesday, while two others conduct runoff elections. There is also a special election to fill the vacancy in Nebraska's 1st Congressional District.

After Tuesday, there is an extended break on the election calendar. July is limited to the Maryland primaries on the 19th and North Carolina runoffs on the 26th. This is followed by a very busy August where most of the remaining states will hold their contests.

On this page, we'll provide an overview of some of the more interesting races. Use the links below to see all results. Latest poll closing (Eastern Time) appears below the state name. If you are voting in one of these states, check with your polling place as the hours may differ.

Virginia holds its statewide primaries Tuesday. These are limited to contested primaries for U.S. House, as state offices are up in odd-numbered years, and the next U.S. Senate election is in 2024.

There are also runoff elections in Alabama, Arkansas, and Georgia for those offices where no candidate received a majority of the vote in the primary election. In addition, the District of Columbia is holding primaries for mayor and its non-voting delegate to the U.S. House.

Use the links below to see all results. Latest poll closing (Eastern Time) appears below the state name. If you are voting in one of these locations, check with your polling place as the hours may differ.

Partisan Composition of the U.S. House

Republican Connie Conway (CA-22), who won a recent special election, was sworn in earlier this week. Democrats now hold a 220-209 edge over Republicans. There are six vacancies.

Create your own election forecast with the 2022 House Interactive Map.

Four states hold primaries this Tuesday, and there is also a special general election to fill a congressional vacancy in Texas. On this page, we'll provide an overview and live results for several key races.

Use the links below to see all results. Latest poll closing (Eastern Time) appears below the state name. If you are voting in one of these states, check with your polling place as the hours may differ.

Democrat Filemon Vela resigned in March. Republicans are spending heavily to flip the vacant seat, as a win would signal continued momentum with Latino voters, which could help the party's prospects both here and in neighboring competitive South Texas districts 15 and 28 this fall.

The special election is being contested using the existing district lines, while those for the fall use the map created in redistricting.

Coinciding with the statewide primary, voters in three Nevada cities, all among the nation's 100 most populous,1 1City rankings are based on July 1, 2021 Census Bureau population estimates. They are for the city itself, not the associated metropolitan area will cast their ballots in mayoral elections Tuesday.

These are nonpartisan contests (NPA in the results tables).  Polls close at 10:00 PM Eastern Time.

Voters in Alaska have a lot of options from which to choose as they cast their ballot in the all-party primary for the state's at-large congressional district. The seat became open for the first time in nearly half a century when Republican Don Young died in March.

The primary has been conducted largely by mail, with ballots sent to registered voters in late April. Those must be postmarked on or before Election Day, Saturday, June 11. Any ballots that meet that criteria that are received by June 21 will be counted.

There are in-person polling places available on Election Day. The latest of these close at 8:00 PM Alaska Time (midnight Eastern). Live results will appear below after that time, although with the extended window to receive mail ballots, it may be a while before the outcome is known.

Tuesday is the busiest day on the primary calendar, with seven states holding contests. Much of the focus will be on California.

On this page, we'll provide an overview of a few races of interest. Use the links below to see all results. Latest poll closing (Eastern Time) appears below the state name. If you are voting in one of these states, check with your polling place as the hours may differ.

California, Iowa, and South Dakota have elections this year. At this point, forecasters see all three incumbents as safe in the general election. There's an unusual situation in California which we discuss below. In the end, however, Democrat Alex Padilla is expected to win a full term. Republican John Thune should easily win a 4th term in South Dakota. Republican Chuck Grassley is favored to win an 8th term in Iowa.

Incumbent Alex Padilla (D) was appointed by Gov. Gavin Newsom (D) in January 2021, after Kamala Harris (D) resigned to become Vice-President. However, under a new law, Padilla cannot complete Harris' term as an appointed Senator. As a result, there are two primary elections for Senate on Tuesday's ballot. The regular one for the six-year term beginning in January, 2023, and a special primary for the lame duck session after the November elections.

Coinciding with Tuesday's California statewide primary, voters in San Francisco will decide on Proposition H. If it passes, District Attorney Chesa Boudin will be recalled.

Boudin, elected in 2019, is part of the 'progressive prosecutor movement'. According to the Wall Street Journal, "Progressive prosecutors have pursued such goals as sending nonviolent drug offenders to treatment instead of jail, sparing juveniles from being prosecuted as adults and spending resources looking at old cases to free wrongfully convicted people from prison."

The effort to remove Boudin grew out of his handling of specific cases, as well as the perception that crime was spiraling out of control. Last fall, recall advocates amassed enough signatures to have the question added to Tuesday's ballot.

You only thought congressional redistricting was complete.

Late Monday, a federal court in Louisiana threw out the state's enacted congressional map. The court indicated the plan was in violation of Section 2 of the Voting Rights Act. It ordered the Legislature to draw a new map, that includes a second majority-Black district, by June 20. 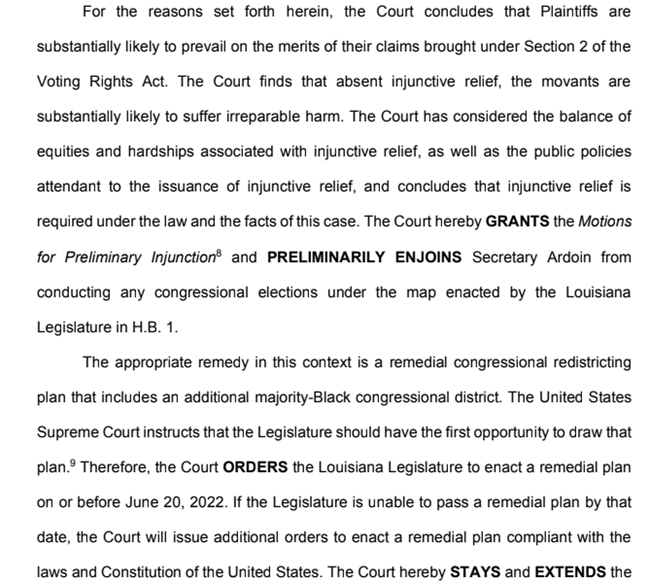