Just two months ago, a poll by the Texas Tribune showed Cruz at 20%, followed by Perry at 12% and Scott Walker at 10%. Trump received only 2%.

Bush remains in third place overall when averaging the two recent Texas polls. The Texas primary is scheduled for March 1, 2016, part of the 'SEC Primary' of 8 southern states.

Click or tap the image above to see who is leading the Republican polls in each state.

Results of New Polls in FL, OH and PA Including Updated Electoral Maps

A new Quinnipiac poll of Florida, Ohio and Pennsylvania shows continued strength for Donald Trump on the Republican side; Hillary Clinton the Democratic side. However, that enthusiam wanes in the general election, with intraparty challengers doing as well as or better in general election match-ups.

In the general election, Quinnipiac tested Clinton, Biden and Sanders vs. Bush, Rubio and Trump. Among the more interesting findings: 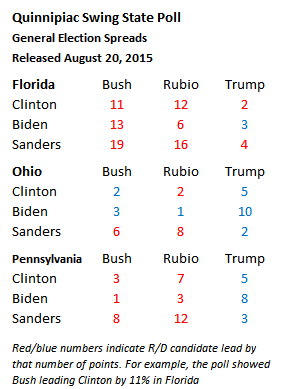 These new numbers have caused some changes on our polling-based Clinton vs. Republican 2016 electoral maps. You can also get to our new Sanders vs. Republicans maps from that preceding URL.

In the Republican primaries, Trump is ahead in Florida, notably taking the lead over home-state rivals Jeb Bush and Marco Rubio in the Sunshine State. Trump also leads, by double digits, in Pennsylvania. In Ohio, that state's governor John Kasich leads, with Trump in 2nd. 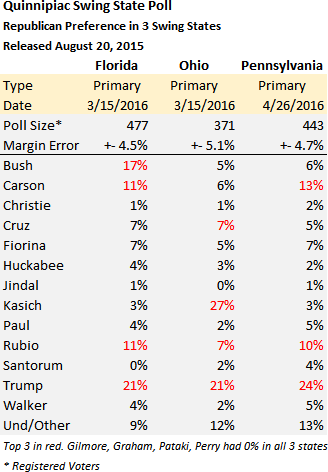 Hillary Clinton continues to hold a wide margin on the Democratic primaries in all 3 states, where the results were basically the same. That said, she is now polling under 50% in all three states, a loss of 8-15 points since the last time Quinnipiac surveyed these states in June.

To see all the primary/caucus polls to this point, visit our Republican Nomination or Democratic Nomination pages. The individual state links are below the national polls.

Two new Republican polls out this week give Donald Trump about 25% of the Republican vote, keeping him well ahead of his nearest challengers. There was some variation behind Trump. In the CNN-ORC poll, Jeb Bush was the only other candidate to reach double digits, at 13%. Ben Carson, Scott Walker and Marco Rubio were bunched just under 10%. The Fox News poll showed a slightly greater preference for more conservative candidates, with Ben Carson and Ted Cruz trailing Trump with Bush in 4th place.

Trump continues to double his nearest competitors in the 270toWin poll average.

The 2nd Republican debate, hosted by CNN, will be held September 16 at the Reagan Library in Simi Valley, CA. 16 candidates that averaged 1% or more in 3 national polls have been invited. Jim Gilmore was not, although he has until September 10 to make the cut.

As with the first debate, the field will be divided into two groups, with those in the top 10 making the main stage. At this point, it looks like 11 candidates will be fighting for those 10 slots. Carly Fiorina's strong performance in the 'kids's table' debate last month has propelled her into the top 10. This means that one of Mike Huckabee, Rand Paul, Fiorina, John Kasich or Chris Christie will likely be excluded. All 5 are tightly bunched within 1% at this time.

Three Iowa Republican caucus polls, with survey dates after the first debate last Thursday, have been released early this week. All show Donald Trump leading, with 17-22% of the 17 person field.

Dr. Ben Carson and Carly Fiorina seemed to have gained the most ground, with Carson now in 3rd place in the 270toWin Iowa average. Fiorina has pushed into 6th place after seeing her support more than double in Iowa.

Looking at some of the other results, Scott Walker remains in second overall, but has seen a notable drop-off since the debate. Jeb Bush has lost support as well, with two of this week's polls having him at just 5%. John Kasich received high marks for his debate performance, but Iowa voters were unimpressed; his level of support remained at about 3%.

Our Iowa Republican caucus page has details on all the polls.The Iowa caucus is scheduled for February 1.

Click or tap the image above to see who is leading the polls in each Republican primary/caucus state.

Vermont Senator Bernie Sanders leads former Secretary of State Hillary Clinton by 44-37% in a new poll from Franklin Pierce University and the Boston Herald. Most polled, by a 65-11% margin, still think Clinton will be the eventual Democratic nominee.

This is the first poll showing Sanders ahead of Clinton; she has a lead of about 3% when averaging recent New Hampshire polls. Nationally, Clinton maintains a considerable lead. It will be interesting to see how that shifts as voters across the nation become as familiar with Sanders as those in New England.

Bookmark our Democratic Primary page to see national and state poll results, with additional content coming as the 2016 primary and caucus contents near.

Fox News has announced the lineup for the first Republican debate, to be held this Thursday in Cleveland. The debate will be on Fox News at 9PM eastern time.

As we noted earlier today, recent polling has been fairly consistent and so there were no surprises in the final announcement. At the center will be Donald Trump, flanked by Jeb Bush and Scott Walker. Also participating will be Marco Rubio, Ted Cruz, Rand Paul, Mike Huckabee, Chris Christie and John Kasich.

First GOP Debate this Thursday: Who's In, Who's Out

The first of twelve GOP debates will be this Thursday, in Cleveland, Ohio, also the site of the Republican National Convention next July. As has been widely reported, Fox is limiting the main stage in this first debate to the top ten candidates based on an average of the five most recent, nationally recognized polls.

With an influx of polling early this week, here is our calculated average for the GOP field:

See the underlying polls here. Not shown are Graham, Gilmore and Pataki, all averaging under 0.5%.

These may not be the five polls Fox uses to come up with its average -- the cutoff for polls to be considered is 5PM eastern today -- but every indication is that Chris Christie and John Kasich will get the final two spots, and Rick Perry will join the other low-polling announced candidates at a separate debate, scheduled for 5PM that evening.

While it remains a bit questionable to base the debate field on an election that doesn't exist, the results of these last five polls have been pretty consistent.

The debate airs at 9PM Thursday on Fox News.

A new McClatchy-Marist Poll, out yesterday, is the first we've seen that sampled all 17 declared Republican candidates against likely Democratic nominee Hillary Clinton. The former Secretary of State is ahead in each case, with margins from 5% to 21%.

Whether or not the margins are accurate in the absolute sense, it seemed like they might give us some indication of the strength of Republican candidates to each other when presented to a general election audience. We could then compare that to what Republican primary voters have been saying about their candidates in recent polls.

In the table below, the first column shows the Republican against Clinton, with the next three columns showing the outcome and Clinton lead in the McClatchy-Marist poll. For example, she leads Scott Walker by 7%. The next column reflects the 270toWin average in the last five Republican primary national polls.

The Ranking columns order by relative standing, with the difference in the final column, shown in red if general election standing is worse than primary. The chart is sorted by Primary Ranking, with the green background representing the ten candidates that would make the cut for this Thursday's first Republican primary.

The most noticeable difference is with Donald Trump, who is well out in front in recent Republican polls. Mr. Trump is likely to have center stage this Thursday, yet has one of the poorest relative showings vs. Clinton in the general election poll. On the other hand, Rand Paul and Rick Perry are ranking much better with a general election audience than with Republican voters. The difference is striking in Mr. Perry's case, as he may be on the outside looking in at this Thursday's debate. 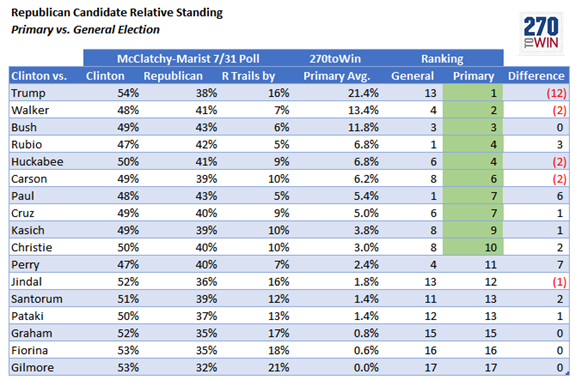 The first Republican debate is scheduled for August 6 in Cleveland. Host Fox News is limiting the field to those ten Republicans placing highest in an average of five nationally-recognized polls. While we don't know which polls Fox will use, Ohio governor John Kasich has displaced former Texas governor Rick Perry for the final spot based on the 270toWin five-poll average. Businessman Donald Trump has won all five of these polls.

The ten-candidate cutoff has received a lot of criticism, and rightly so. Assuming a poll of 500 people, the difference between Chris Christie in 9th place averaging 3.2% and Bobby Jindal in 14th place at 1.2% is just 10 people. That is before factoring in the statistical errors inherent in polling: Some of these polls have sample sizes small enough that almost everyone outside the top 3 is within the margin of error. Yet another issue is that the polling is national, while the choice of a nominee will be done via the primary and caucus system at the state level. Some of those not expected to make the cut are polling well in one or more states, based on their regional strength.

In sum, Fox is choosing ten debate participants based on insignificant differences in polls for an election that doesn't exist.

Clinton trails all three Republicans in Colorado and Iowa, while Virginia results are within the margin of error.

Bernie Sanders and Joe Biden also trail this same set of Republicans. However, Sanders is actually outperforming Clinton in some cases, the first time we have seen that.

Results of the Quinnipiac poll are below. Check our polling page for all the 2016 presidential polls. 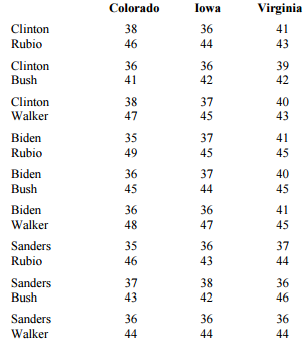