Pennsylvania's Democratic Gov. Tom Wolf has rejected the revised congressional map submitted late last week by the Republican-controlled Legislature. The two parties have until Thursday to agree on a new map or the Court will draw one of its own.

The proposed map was redrawn after an order by the Pennsylvania Supreme Court last month that held the current congressional district borders were unconstitutional. An appeal of this decision to the U.S. Supreme Court was denied.

While the revised map meet some of the Court's specifications regarding geographic compactness and political (e.g., county and/or city) boundaries, numerous analyses have found the submitted map to be roughly as partisan as the current map.

Current Map, seats held by party (from our Interactive House Map, choose Pennsylvania in the drop down): 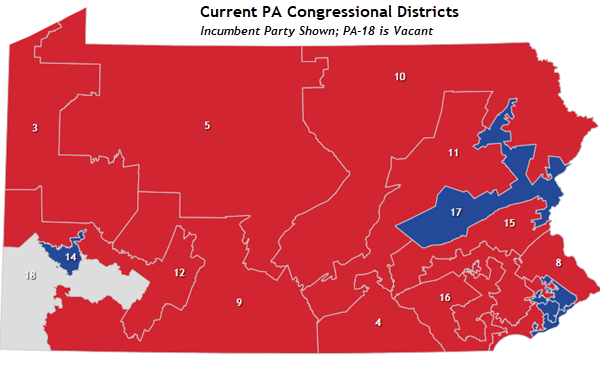 Proposed Map (from the Washington Post, based on presidential margin of victory in 2016): 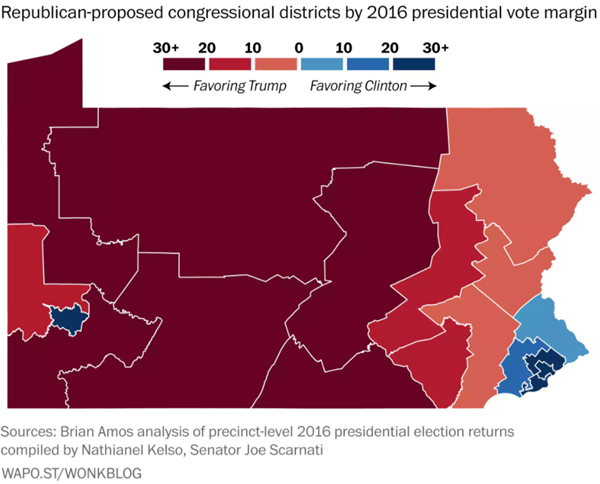 The Court order specified that the new borders will be effective for the 2018 midterms, beginning with the state's primaries, scheduled for May 15th. However, the special election for the vacant 18th district, scheduled for March 13th, will take place under the existing boundaries.