North Dakota's at-large Rep. Kevin Cramer will announce Friday his entry into the U.S. Senate race. The 3-term Republican will give the party a top recruit in its effort to unseat Democratic Sen. Heidi Heitkamp.

Cramer initially had passed on running, but apparently has had a change of heart in recent days. The only other Republican in the race, state Sen. Tom Campbell, may shift over to run for Cramer's seat in the House.

A Facebook page 'Kevin Cramer for US Senate' posted that the announcement would come late Friday afternoon in Bismarck. 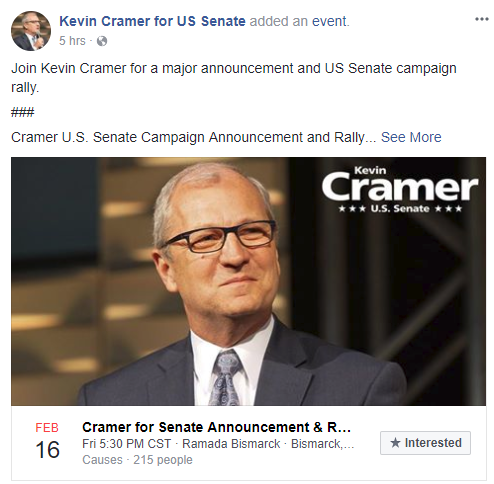 Cramer will become the 51st current House member to pass on re-election to that body in 2018. He'll be the 10th of those running for the U.S. Senate.  We'll add him to the list of retirements when the announcement is official.