The 270toWin App for the Apple iPad is now available in the iTunes store. This app literally puts the 2012 election in your hands. We took many of the best features of 270toWin and re-imagined them for tablet technology. The result, we think, is an app you'll use over and over again until the 2012 election (and beyond).

Looking for a holiday gift?   The 270toWin app is the perfect gift for the political junkie in your life. It is easy to gift the app. Just click the downward arrow below the 270toWin logo in the iTunes store or, touch "Gift this App" if you are looking at the 270toWin app in the App Store on your iPad.

Here are some features of the app that you won't find on the 270toWin website: 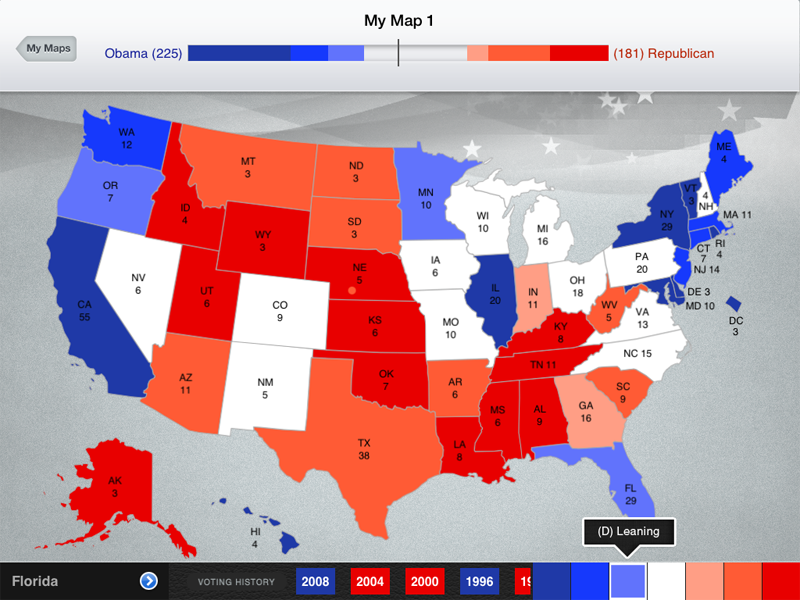 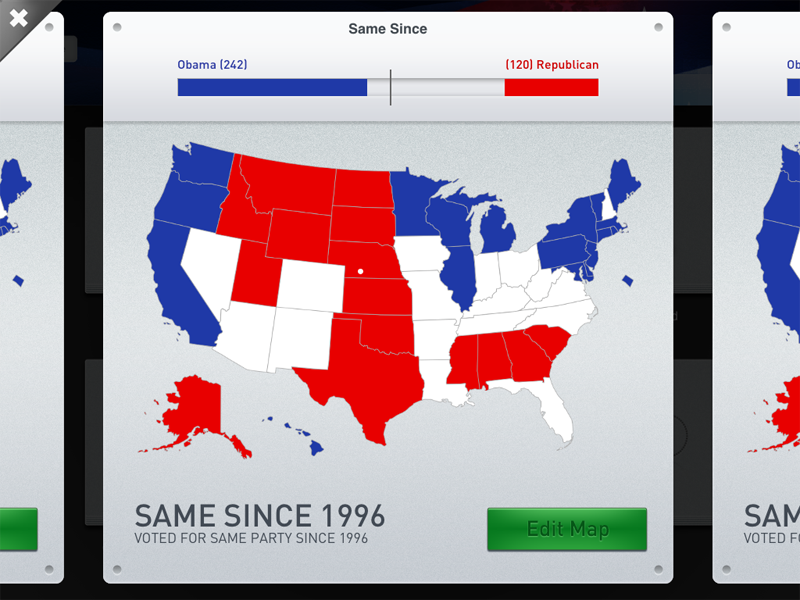 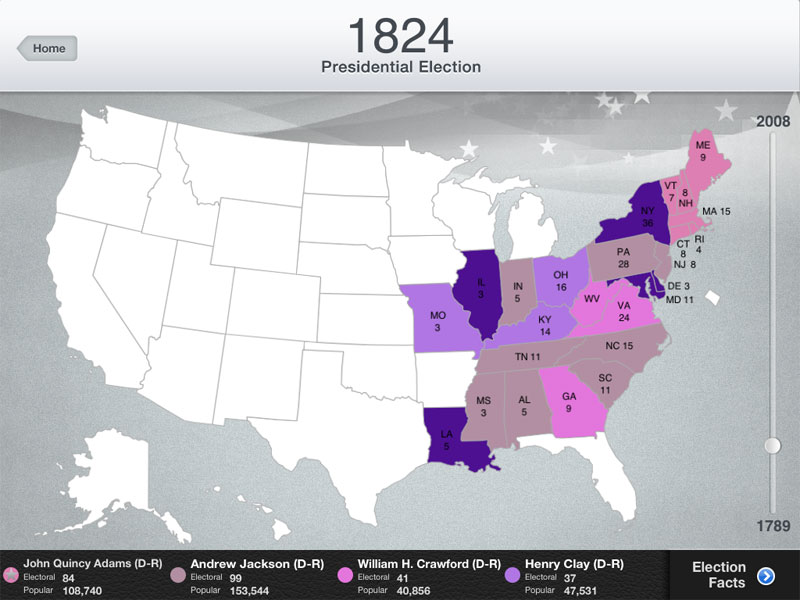 For more information, visit our 270toWin iPad app page or go directly to the app in the iTunes store.

From October 25 through November 4, 270toWin conducted a straw poll on the website, asking visitors their preference in various hypothetical 2012 general election match ups. The goal was to not only take the popular vote temperature, but also to translate the votes into an electoral map, to see how that might vary based on the match-ups.

In our straw poll (see disclaimer at bottom), President Obama received more votes than each of the 5 Republicans. The popular vote was close against Mitt Romney and Ron Paul, less so against the other 3 challengers.  Of course, we don't elect our presidents based on popular vote, but rather the electoral vote.

Caution:  It is important to note that this is a non-scientific poll, meaning those who participated were not chosen at random, nor necessarily distributed in a way reflective of the population as a whole. At this early point in the election cycle, 270toWin draws an audience that is far more interested in politics and the election than the population at large. This audience's opinions about specific candidates or match-ups may not reflect that of the population at large. Furthermore, even if the poll were random, the number of participants in most states was too small to draw a statistically valid conclusion.

The 2010 Census results are out, showing the U.S. resident population grew to 308.7 million people as of April 1, 2010, vs. 281.4 million in 2000. Use the preceding link to see the Census Bureau's press release, and links to all the facts and figures regarding demographics and other trends.

Our interactive 2012 electoral map now includes the new distribution. Just choose the 2012 option in the "Electoral View" at the bottom left of the map. Overall, if the 2008 election were held using the 2012 apportionment, Obama would have received 6 fewer electoral votes... 359 instead of 365.

This is because the 2010 Census shows that the U.S. population continues a decades-long trend toward the south and the west. Although Obama won some of these growth states in 2008, on balance they voted Republican for a net shift of 6 electoral votes.

Looking beyond the Electoral Vote distribution, reapportionment leads to redistricting, the redrawing of Congressional district boundaries.  This is controlled by state governments. While redistricting will take place in most states, it is a particularly important topic in states gaining or losing seats. In states losing seats, you may see two incumbents squaring off against each other in a 2012 primary or general election. Redistricting will occur in time for the 2012 election, and the newly apportioned House will be seated in Janaury, 2013.

In an ideal world, congressional districts would be drawn objectively, by computer, dividing up a state's population evenly, by location. However, redistricting in many states leads to gerrymandering, which is basically the creation of districts based on other demographic criteria, and is mostly done to protect incumbents. Many of these will change for 2012, but check out this slideshow of the 20 most gerrymandered districts created after the 2000 Census.

**If you are reading this directly instead of linking here, this relates to the section under the interactive map on the 270toWin home page called "The Probability of 270".**

However you get here, it is important to point out up front that the outcome of this exercise is statistically valid based on current polls and is not a projection of the election. The election could turn out completely differently than the displayed results but it doesn't mean that the underlying polls used were inaccurate. They could have been perfectly accurate when they were taken, but we'll never know since we only vote on Election Day. So don't read more into these numbers than is actually there.

Although it is rarely presented this way, statistical theory makes it possible to take the results of a state poll and calculate the probability that either candidate will actually win that state's popular vote, and thus collect its electoral votes. For example, let's say that a poll with a sample size of 600 for Missouri comes back 48% for Candidate A and 44% for Candidate B, with 8% other, undecided or some other response. Since a victory by 10 votes is the same as a victory by one million votes --- the winner gets the full electoral college bounty for the state, the only question we are trying to answer is: "Given these results, what is the probability that Candidate A will actually get more votes than Candidate B in Missouri?" In this specific case, the answer is about 85%.

It is important to note that, for example, a 4% spread doesn't always equate to 85%. The number will vary based on the number of people sampled and will also vary based on the proportion of undecided/other is in the results.   Smaller sample sizes and more undecided responses lead to greater uncertainty in the outcome, pushing the probabilities toward 50-50.  Of course, a smaller spread between candidate A & B will also result in a probability closer to 50-50.

For those interested in even more detail, see below.  An example is provided inside the < >.

A touchscreen version of the 2008 interactive 270toWin map is on display at the McCormick Tribune Freedom Museum in Chicago. The map is part of the "Vote4Me! Inside a Presidental Election" exhibit, which will be at the museum through November 9, 2008. Admission is free through the end of 2007.

The Vote4Me! exhibit is intended to help visitors understand the election process, including the all-important 270 Electoral Votes needed to win the Presidency.