Two vacanies have arisen this week in the House of Representatives as a result of political appointments. Additional vacancies may be forthcoming as President Trump's nominations are confirmed. Lastly, several House Members have announced they will not be running for re-election in 2018.

With these two vacancies, the House sits at 240 Republicans, 193 Democrats. 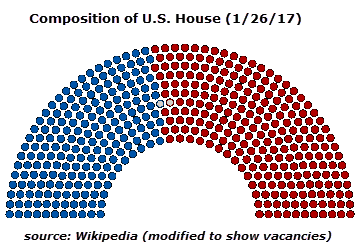 Retirements (not running for re-election in 2018) have been announced by:

Grisham and Noem are running for governor in 2018.