The 2016 election made many people aware that the way electoral votes are distributed gives residents of sparsely populated states more clout than those in large states. To take the two extremes, California gets 55 electoral votes for 37.3 million people (2010 Census), or one electoral vote for approximately each 680,000 people. Wyoming receives 3 votes for its 568,000 people, or about one per 190,000. For more detail, see the 'Background' section of this article. 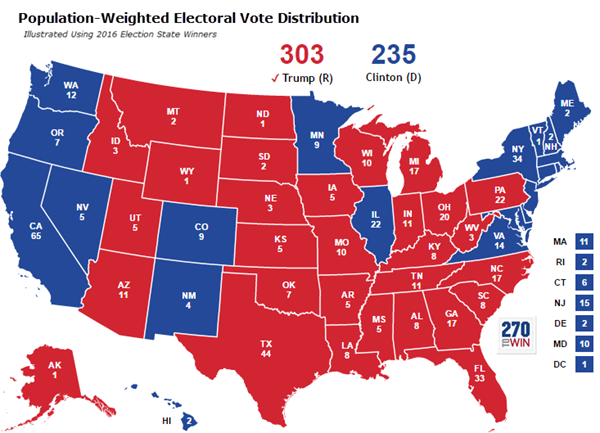 Donald Trump would have received 303 electoral votes, a reduction of just three from the 306+ he actually won. That might seem surprising since Hillary Clinton won the popular vote. There's a second factor at work here, which is the margin of victory in each state. If we look at the states gaining the most using population, the ones Clinton won were by a much larger margin than those won by Trump. California gained 10 electoral votes, New York 5. Clinton won these by 30% and 23%, respectively. On the other hand, Trump won Texas, which gained 6, by 9%, and Florida, which gained 4, by just 1%.

In terms of electoral votes, winning a state by a huge margin is no better than winning by a very small one, and so, in a sense, all those extra actual votes cast for Clinton are not helpful in this framework. For those that favor a national popular vote, the methodology described on this page would likely not be a satisfactory alternative.

The above rules mean no state can have fewer than three electoral votes or, put another way, 385 electoral votes are allocated based on population, with 153 (including three for the District of Columbia) essentially fixed. The net effect of this is that smaller population states are overrepresented in the Electoral College, while larger states are underrepresented.

^ We kept electoral votes as whole numbers, so the weighting is not exact. Additionally, we relaxed the rule slightly so that DC and Wyoming would receive an electoral vote. If the model was followed exactly, Missouri and Illinois would have gotten the last two electoral votes. Either way, the 303-235 total would be the same.

+ Ignores faithless electors. Assumes no Maine split, since that state is reduced to two electoral votes.

* After reapportionment, the individual states engage in redistricting, which sets the geographic boundary for each congressional district. Each state has its own procedures for redistricting. That process is undertaken by the legislature in many states, which often leads to gerrymandered districts shaped to protect incumbents and/or maximize the number of congressional districts likely to be won by the party controlling the legislature.