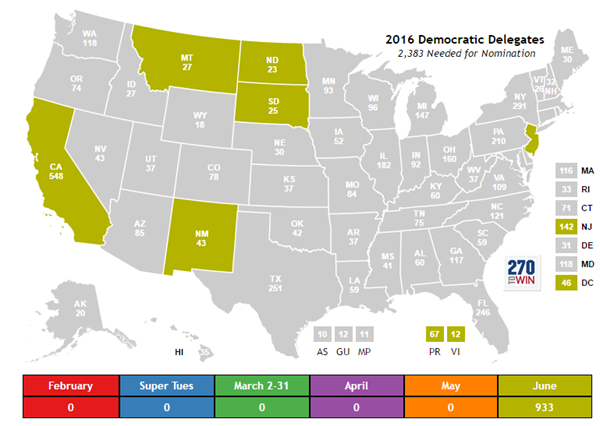 The final survey from the highly-regarded Field Poll in advance of next Tuesday's California primary gives Hillary Clinton a two-point lead over Bernie Sanders. This is the third poll in the last five to show Clinton with a two-point lead. The other two polls showed her with a double-digit lead.

The poll found that Clinton leads by 9 among those who have already cast a ballot, while Sanders leads by one among those not yet voting. Mark DiCamillo, director of the Field Poll said that "it will boil down to turnout. If Sanders can get his voters to the polls, he could pull out a victory in California.”

As we noted yesterday, "regardless of how California turns out, Clinton will easily surpass the required 2,383 delegates (including committed superdelegates) next Tuesday. She is expected to arrive at the Philadelphia convention with a lead of about 300 pledged delegates, making a case against those superdelegates flipping their position. That said, a Sanders victory here would certainly give him momentum to push his policies at the convention."

Who Will Win the California Dem. Primary? 6 Days Out, Polls Tell a Conflicting Story

Six days out, polls say the California Democratic primary is either tied or Hillary Clinton leads by double-digits. Not much in-between.

An NBC News/WSJ/Marist poll out Tuesday has Clinton up by just two on Bernie Sanders, well within the polls margin of error. This is consistent with a PPIC poll from last week, also showing Clinton up two. However, two other polls in recent days show Clinton up from 13 to 18 points.

The 270toWin polling average gives Clinton a lead of about 9 points. Unclear how useful an average is in this case.

Regardless of how California turns out, Clinton will easily surpass the required 2,383 delegates (including committed superdelegates) next Tuesday. She is expected to arrive at the Philadelphia convention with a lead of about 300 pledged delegates, making a case against those superdelegates flipping their position. That said, a Sanders victory here would certainly give him momentum to push his policies at the convention.

California's 475 pledged delegates are the largest number for any state. New Jersey, New Mexico, Montana and both Dakotas also hold events on June 7th. In total, it is the most delegate-rich day outside Super Tuesday for the Democrats 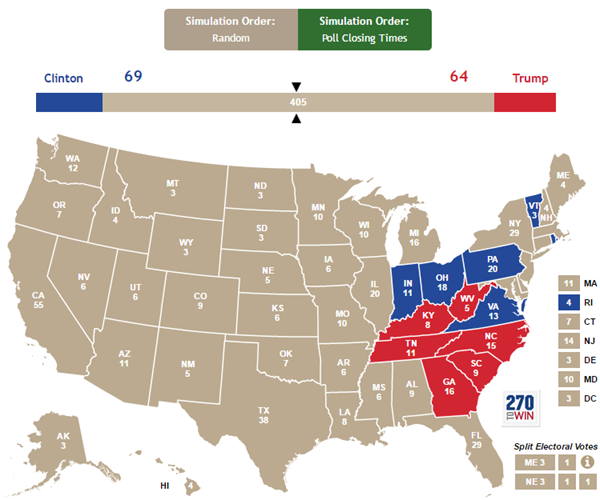 Libertarians have selected former New Mexico Governor Gary Johnson as their party's 2016 presidential nominee. He won on the 2nd ballot at this weekend's party convention in Orlando.

Johnson has selected former Massachusetts governor William Weld as his running mate. As of this writing, Weld has not been nominated, and there is some possibility his candidacy will be rejected.  UPDATE: Weld was nominated as Johnson's running mate.

Johnson was also the party's 2012 nominee, when he received almost 1.3 million votes, about 1% of the general election total. That marked the highest vote count for a Libertarian in any presidential election. Percentage-wise, it was slightly less than the 1.06% total that Ed Clark (VP David Koch) received in 1980. In neither case did the party win any electoral votes.

No 3rd party candidate has won electoral votes since 1968? Will that change this year? Game it out with our interactive 3-way electoral map that includes the Libertarian Party. Click the map to create your own at 270toWin.com
Click/tap the map to use. Colorado is colored yellow for display purposes. Each state will rotate between the three available party options.

Hillary Clinton leads Donald Trump 253-191 in this early look at the consensus electoral map for the 2016 general election. This particular map combines the projections of five pundits as of late May. Click or tap the map to use it as a starting point for your own 2016 forecast. Only states rated safe by all five pros are shown in the deepest blue and red on the map. Five additional states were rated safe by four of five (MS, MT, NJ, NM, OR).

The general election campaign is just getting underway, so much could change, particularly given the dynamics of the 2016 race. However, if the map ended up this way, Florida and Ohio would be must-win among the toss-up states. In addition, this particular map has no tie possibilities. Use The Road to 270 below the map to investigate different paths to victory for each candidate. That feature updates with each change you make to the map.

The Associated Press reported Thursday morning that Donald Trump has reached the 1,237 delegates needed to clinch the Republican nomination.

While this was not expected until June 7th, "Trump was put over the top in the Associated Press delegate count by a small number of the party's unbound delegates who told the AP they would support him at the national convention in July."

Trump will be officially nominated at the Republican National Convention in Cleveland the week of July 18th.

A new poll from the Public Policy Institute of California (PPIC) shows a virtual tie between Hillary Clinton and Bernie Sander. Clinton leads by just two points, 46% to 44%.

Polling results for the Democratic nomination has been inconsistent, generally showing a tight race or a blowout, with not much in-between. Two SurveyUSA polls this month, including one earlier this week, give Clinton a lead of almost 20 points, while a Fox News poll from late April also showed a two point margin. If we average the PPIC and recent SurveyUSA polls, this gives Clinton a 10% lead.

Regardless of where the result lands, the outcome is unlikely to change the trajectory of the race. Thanks in part to superdelegates, Hillary Clinton will surpass the 2,383 delegates needed to win the nomination on June 7th, when California is joined by a number of other states in the last big day of the Democratic calendar. Sitting at 2,305 delegates, Clinton is just 78 away from being declared the winner.

The math remains daunting for Sanders even excluding superdelegates. He would need to win roughly 2/3 of the remaining pledged delegates to catch her in that category. A loss in California, even a small one, would require him to win at least 85% of the popular vote in just about every other remaining contest.*

While neither Clinton nor Sanders will arrive at the Philadelphia convention with 2,383 pledged delegates, Clinton will likely have won about 300 more than Sanders. That makes it difficult to envision that hundreds of superdelegates will change their previously stated preference for the Democratic frontrunner.

* Democratic delegates in each contest are proportionately allocated, with a 15% threshold to qualify for any.

As expected, Donald Trump easily won the Washington state primary on Tuesday, getting about 76% of the vote. Withdrawn candidates Ted Cruz, John Kasich and Ben Carson were also on the ballot.

Trump's win adds 40 delegates to his total, the state's other 4 delegates remain to be allocated. This brings him to 1,209 delegates, just 28 from the 1,237 needed to win the nomination. He is expected to cross the finish line at 8PM on June 7th, when he is declared the winner of the New Jersey primary and that state's 51 winner take all delegates.

June 7th is the next and final date on the Republican calendar. In addition to New Jersey, four other states will hold contests that day, with 303 total delegates.