Ten Candidates Have Qualified for Next Week's Democratic Debate

Ten Democrats have qualified for the 5th Democratic debate, to be held on November 20 in Atlanta. The event will be hosted by MSNBC and The Washington Post and broadcast live from 9:00 PM to 11:00 PM Eastern Time.

Update:  The candidates will appear in this order, from left to right on stage:  Booker, Gabbard, Klobuchar, Buttigieg, Warren, Biden, Sanders, Harris, Yang and Steyer.

Neither Texas resident that participated in October's debate will be in Atlanta. Former HUD Secretary Julian Castro did not meet the Democratic National Committee's polling requirements, although he did cross the donor threshold.  Former Rep. Beto O'Rourke withdrew from the race on November 1. 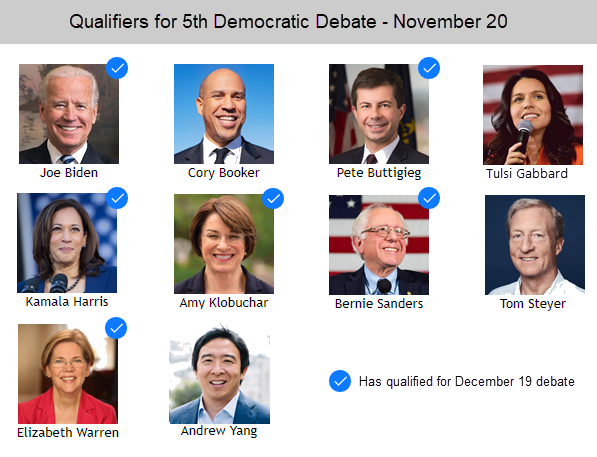 Looking ahead, the final debate of 2019 will be held on December 19 in Los Angeles*. It will be hosted by PBS and Politico. At this point, six of the ten candidates in next week's debate have met the DNC's more stringent qualifying criteria.

* Originally scheduled for the campus of UCLA, the debate has been moved to Loyola Marymount University.