The Importance of Tuesday's General Assembly Elections in Virginia

This article is the first written for us by Seth Moskowitz, who will be contributing to 270toWin during the 2020 election.

On Tuesday, Virginia voters will elect the state legislature responsible for drawing state and congressional district lines following the 2020 Census, a task that will define the state’s political landscape for a decade.  If Democrats can flip both chambers of Virginia’s General Assembly, the party will have unilateral power over this crucial process. The election has attracted unusual attention for a state legislative contest, bringing in over $52 million in campaign donations and attracting national political figures including Vice President Mike Pence, former Vice President Joe Biden, and Senator Bernie Sanders to headline campaign events.

The Virginia election kicks off Democrats' 2019 and 2020 plan to claw back from the 958 state legislative seat deficit the party incurred during the Obama presidency. These down-ballot net losses gave Republicans the power to draw 193 congressional districts following the 2010 Census; Democrats had control over just 44. This cemented a Republican bias in the House of Representatives as well as in many state legislatures. Democrats are determined to take this power back from the GOP. Virginia presents their first chance at flipping a closely-divided state legislative body that will be in power following the 2020 Census. Given that Democrats already hold the Governorship, which is not up for election until 2021, if the party can win majorities in both legislative chambers, it will have control over redistricting.

Virginia is now considered a blue-leaning state, largely due to population growth in urban areas and Washington D.C. However, as recently as 2001 Republicans held the Governorship, both U.S. Senate seats, and both chambers of the state legislature. While the current governor and both U.S. Senators are Democrats, Republicans have managed to hold a continuous majority in the House of Delegates since 1999. The last round of House elections, in 2017, nearly ended this reign, but the 15 seats that Democrats picked up fell just short of what was needed to gain control. That year, Republicans won the tiebreaking seat after their candidate’s name was literally drawn out of a bowl at random after both nominees tied at exactly 11,608 votes. The Senate has been friendlier for Democrats, where the party held the majority from 2008 to 2012 and briefly again in 2014. In the last Senate elections, in 2015, Republicans won their current 21-19 majority.

All 100 seats in the House of Delegates and the 40 in the Senate are up for grabs this Tuesday. The GOP currently holds* a 51-49 majority in the House of Delegates and a 21-19 majority in the Senate, meaning Democrats need to flip two seats in each chamber to gain outright majorities. Because Democrats hold the Lieutenant Governorship, who breaks a tie in the State Senate, the party only needs to flip one Senate seat to take control there.

Tuesday’s contests are part of an off-year election — they don’t take place in a presidential year, a midterm year, or alongside any statewide races. Only the most committed and enthusiastic voters turn out in these standalone elections, meaning that the results will largely come down to whether Democrats or Republicans are more energized. And while Republicans traditionally have better turnout in off year elections, the nationalization of local elections and President Trump’s unpopularity portend trouble for the GOP.

According to Morning Consult, Trump has a net -6% approval rating in Virginia, a 15% drop from when he first took office. Additional polling from Reuters/Ipsos in Virginia corroborated Trump’s unpopularity, finding that 58% of suburban women, a crucial swing voting bloc, disapprove of Trump.

Similarly, Democratic turnout could be depressed due to three separate scandals involving three of the state’s top Democratic elected officials. First, a photo allegedly featuring Governor Ralph Northam in either blackface or a KKK robe surfaced. Following this, his would-be successor, Lieutenant Governor Justin Fairfax, was accused of sexual assault. And finally, the next official in the line of succession, Attorney General Mark Herring, faced his own blackface photo scandal. Recent polling from Morning Consult and The Washington Post finds Northam, Fairfax, and Herring all above water and has Democrats leading the House of Delegates generic ballot by 8 points. So, while the political environment may be volatile, polling looks promising for Democrats.

Adding to the list of Republican concerns is that the geographic battleground clearly favors Democrats in both the House and Senate races. Republicans currently hold seven House districts and four Senate districts that Clinton carried in 2016 while there are no Democrats in either chamber holding districts that Trump won. This favorable map is largely due to a 2019 federal court decision that determined the state’s House of Delegates was racially gerrymandered and mandated changes to 25 districts that benefited Democrats. Election handicappers believe that the Senate is nearly certain to flip and that the House favors Democrats as well, though not as strongly as the Senate. Given the volatile environment and Democrats’ need to flip both chambers in order to win complete control, 270toWin rates control of Virginia’s General Assembly as a Tossup.

The Constitution delineates that every ten years the government should enumerate “the whole number of persons in each state” and that House representatives should be apportioned to the states according to their populations. The states, then, are responsible for drawing their own congressional and state district boundaries.

While Democrats picked up seven governorships and six legislative chambers in 2018, if redistricting happened with the current party splits, Democrats would be responsible for drawing about 11% of congressional districts while Republicans would draw nearly 40%. Virginia represents Democrats first shot at expanding their district-drawing power following the 2018 election cycle.

Virginia’s current congressional map was drawn in 2011 by Republicans (who controlled the General Assembly and the governorship) and adjusted in 2016 after the courts ruled it unconstitutional. The unconstitutional version of this map is shown below. 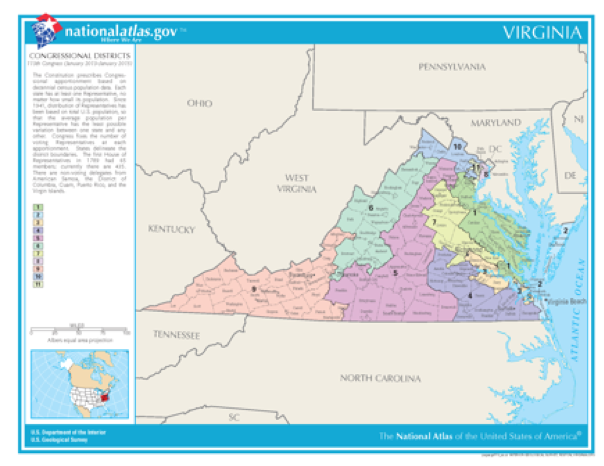 The map was drawn as an “incumbent protection map”, packing Democrats into the 11th and 3rd Districts in order to cement Republican advantages in the 1st, 4th,  7th and 10th. This backfired on Republicans when the courts determined that Republicans had unconstitutionally gerrymandered black voters into the 3rd District, making the surrounding districts easier Republican wins.

The new map unpacked these black voters mostly into the 4th District, making it an easy pickup for Democrats in 2016. And while the 3rd District shifted rightward, it was previously so blue, that Democrats had, and will have, no trouble holding onto it. The 2nd and 7th Districts also shifted, although to a much lesser degree than the 3rd and 4th. The 7th District shifted from 77% white and 15% black to 72% white and 19% black, becoming about 3% more Democratic in the process. The 2nd District moved about 3% in Republicans’ favor as it traded out density around Newport News and Norfolk for more rural territory. Democrats picked up the adjusted 2nd and 7th Districts in 2018 as well as the unchanged 10th District, shifting the Congressional delegation from 6 Republicans and 5 Democrats to 7 Democrats and 4 Republicans. 270toWin’s map of the current congressional lines and partisan breakdown is below. For more details on each district, see the Virginia Public Access Project’s website.

The elections on Tuesday will determine if Democrats have unilateral power to redraw the congressional lines or if Republicans will have a seat at the table. Following the Census, Virginia is expected to again be apportioned 11 congressional representatives. If Democrats do win a trifecta the party could carve up the state to their benefit, solidifying its gains in crucial suburban House swing seats and maybe even picking up one more seat.

Democrats first order of business would likely be to shore up the competitive districts picked up in 2018 — the 2nd, 7th, and 10th Districts. The 2nd District could incorporate more density from the urban Hampton Roads metro area that currently lies in the 3rd District. Democrats could also include more density of Richmond and its surrounding suburbs into the 7th District in exchange for more rural and Republican northern parts of the district. Lastly, if Democrats were to trade out the eastern rural portions of the 10th District for denser areas surrounding Washington D.C. in the northwest part of the state, the party could probably craft a district easy for a Democrat to hold.

Democrats would have to be careful, however, to avoid the same mistake that Republicans made by gerrymandering by race for partisan gain. The party would also need to be careful to avoid jeopardizing the “minority-opportunity” status of the 3rd and 4th Districts, which “give racial or ethnic minorities the sway to elect the candidate of their choice”.

Lastly, Democrats could try and gerrymander the 5th District to make it more competitive. A map proposed by Democrats in the State Senate in 2015 gives some clue as to how Democrats could do this. In this map, Democrats carved out Roanoke and Lynchburg, two cities in the eastern part of the state that are now in the 6th District, in exchange for rural territory above Charlottesville. Barack Obama would have carried this iteration of the 5th District 52.3% to 47.7%. There is also room for Democrats to play around with Albemarle County, host to very liberal Charlottesville. Depending on the rest of the map and their goals, Democrats could split it in between the 5th and 7th Districts or give it wholesale to one of them.

The upcoming elections in Virginia are just a starting point for Democrats eager to break down the Republican advantage in state legislatures and get a hold on the redistricting process. Next year, Democrats will aim to break a Republican lock on the redistricting process by winning (or wearing down Republican margins) in competitive legislative or gubernatorial elections, including in Florida, Georgia, Mississippi, North Carolina, Ohio, and Texas. The party also aims to take unilateral control of the process in others including Minnesota, Pennsylvania, and New Hampshire.

Tuesday’s elections are just one battle in the larger war for redistricting power. The results are, of course, important for Virginia’s future. But in a broader sense, the outcome will indicate how the two parties are faring in the national fight to redraw legislative districts, and with them, the map upon which the next decade of politics will be fought.

Seth Moskowitz is a 270toWin elections and politics contributor. He is also a Guest Contributor to the UVA Center for Politics Sabato’s Crystal Ball and founder of the elections blog, EverySecondYear. You can reach Seth at s.k.moskowitz@gmail.com or on Twitter @skmoskowitz.