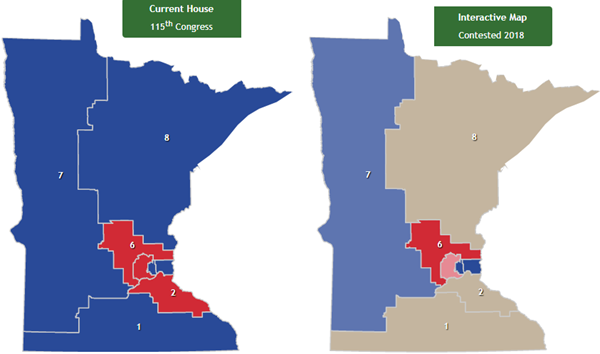 There are 1,000 Days Until the 2020 Presidential Election

Today (February 7th) marks 1,000 days until the 2020 presidential election. That will take place on Tuesday, November 3rd 2020. There are 272 days until this year's midterm elections on November 6th. 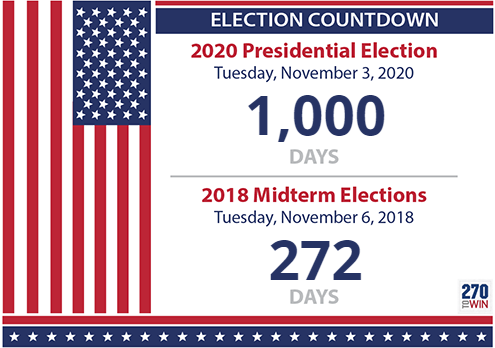 Reps. Gowdy of South Carolina, Brady of Pennsylvania to retire; House Departures at 49

Republican Trey Gowdy of South Carolina and Democrat Bob Brady of Pennsylvania announced Wednesday that they will retire at the end of the year. This brings to 49 the number of current members not seeking reelection. 34 of those are Republicans, while 15 are Democrats.

Gowdy, in his 4th term, chairs the House Oversight Committee, and is most well-known for chairing the Benghazi investigation. His 4th district includes much of Greenville and Spartanburg in the northwest corner of the state. Gowdy won reelection in 2016 by 36 points, while Donald Trump won here by 26 points over Hillary Clinton. The district is expected to remain in Republican hands.

Brady, in his 11th term, has been shadowed by an FBI investigation into a payment his campaign made to a primary opponent in 2012. Brady was not charged, but a political consultant for the congressman pleaded guilty to lying about the payment. He represents Pennsylvania's 1st district, which is one of the most Democratic in the country. Both Brady and Clinton won here by more than 60 points in 2016. The district primarily runs along the Delaware River from Northeast Philadelphia to Chester. It will likely be redrawn if a recent court ruling is upheld.

Brady is the 5th announced departure among the state's 17 current members. Pennsylvania's 18th district is vacant, and will be filled by a special election on March 13th. Gowdy is the first 2018 retirement from South Carolina's congressional delegation.

How Trump's Approval Rating Looks on the Electoral Map

Gallup has published Donald Trump's approval rating in each of the 50 states. This is based on over 170,000 interviews conducted during 2017.  Trump's national approval rating averaged 38% during 2017, with 56% disapproving. Breaking it down by state, the results ranged from 26% in Vermont to 61% in West Virginia. (Washington D.C. gave Trump an approval rating of 6%).

Gallup found that Trump had approval ratings above his 38% national average in 33 of the 50 states. This occurred because some of the states where he performs most poorly are very populous states like California. At a high level, this outcome sounds pretty similar to what we saw in the 2016 election, where Trump surpassed 270 electoral votes while losing the popular vote. 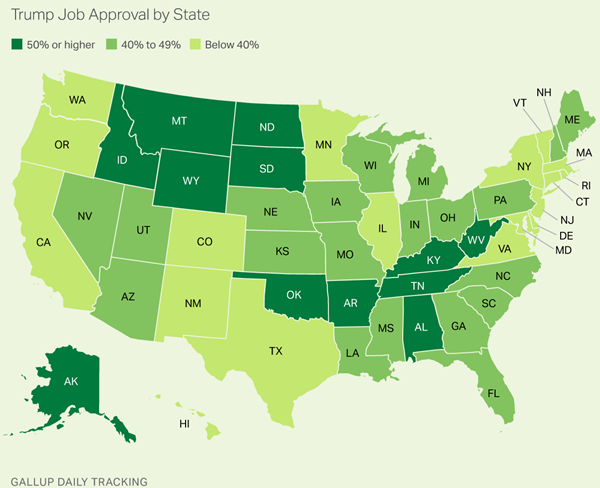 Texas appears to be the biggest surprise; Trump's approval here was just 39%. A couple caveats to keep in mind: the surveys were taken over the course of an entire year, so not really a snapshot in time. Also, the surveys were of adults; no consideration given to voter registration status. That last point might help explain the low number in Texas, as Latinos have historically voted at lower rates than whites.

The above in mind, it probably isn't totally fair to try and translate approval ratings into a 2020 electoral map. Of course, if one published a website around electoral maps, they might do it anyway.  So here it is. The map is interactive, so if you don't agree with our categorizations (below the map), you can change them and create your own. 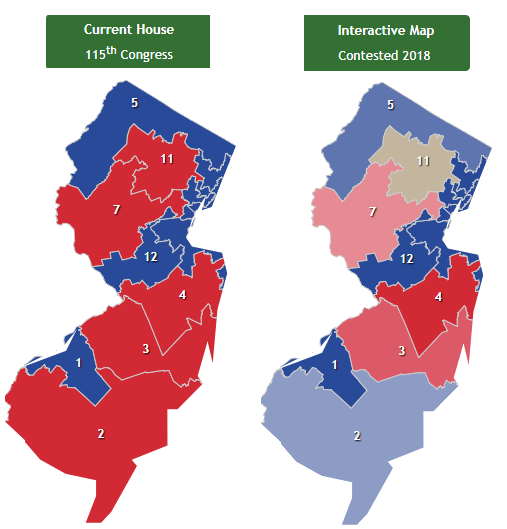 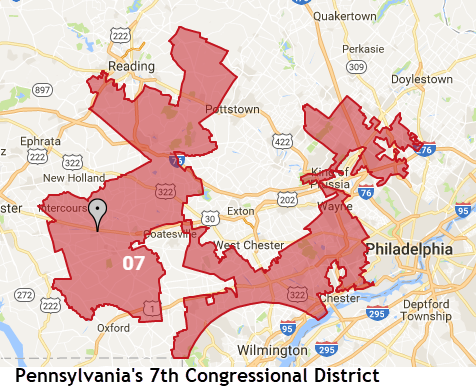 More features, including social sharing of individual forecasts, will be coming soon. 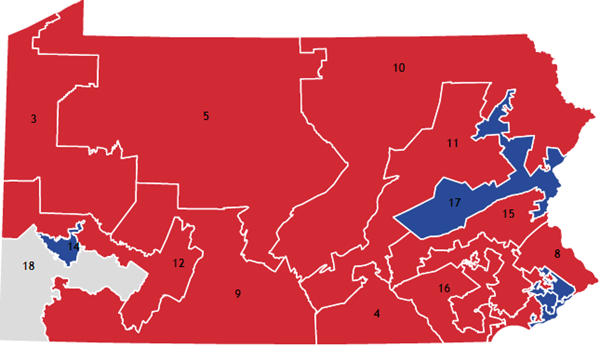 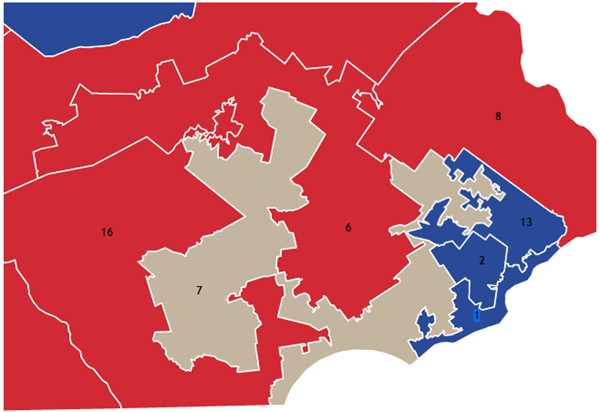 There are elections for governor in 36 of the 50 states this year. 26 of those offices are held by Republicans and nine by Democrats, with one independent in Alaska. Only half of the Republican incumbents are running; all the departing governors, except for Idaho's Butch Otter, are term-limited. On the Democratic side, five of the nine incumbents are running; two of the four departures are due to term limits.

Overall, as of January 16th*, Republicans hold 33 governorships and Democrats 16, with one independent. This year's gubernatorial elections will take on more national importance than usual as the governors elected this year will be in office^ when redistricting occurs after the 2020 Census. In most states, the legislature draws the district lines, while the governor has veto power.

With heightened interest in these gubernatorial races, we've begun a process of upgrading the Interactive 2018 Governor Map. The first part of that, saving and sharing maps via social media, is now live. As with the presidential and Senate maps, click the 'Share Map' button that will be visible below the map (after you make one or more changes). Once you click that, the social media buttons below the map will become active, and you can share your specific projection via social media or email. The map image can also be embedded on a web page via the rightmost button.

In the table below, we've embedded the current race ratings from Sabato's Crystal Ball, The Cook Political Report and Inside Elections. Select any of them to use as a starting point for your projection.

These are the default projections when you reset the map. We'll be adding other starting views in the weeks ahead. 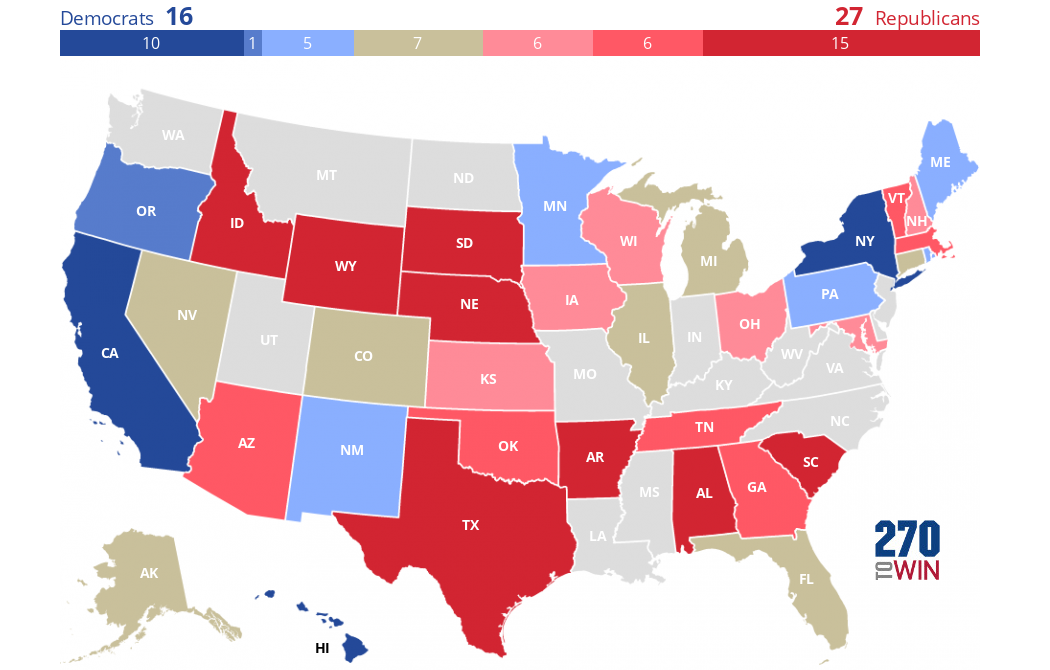 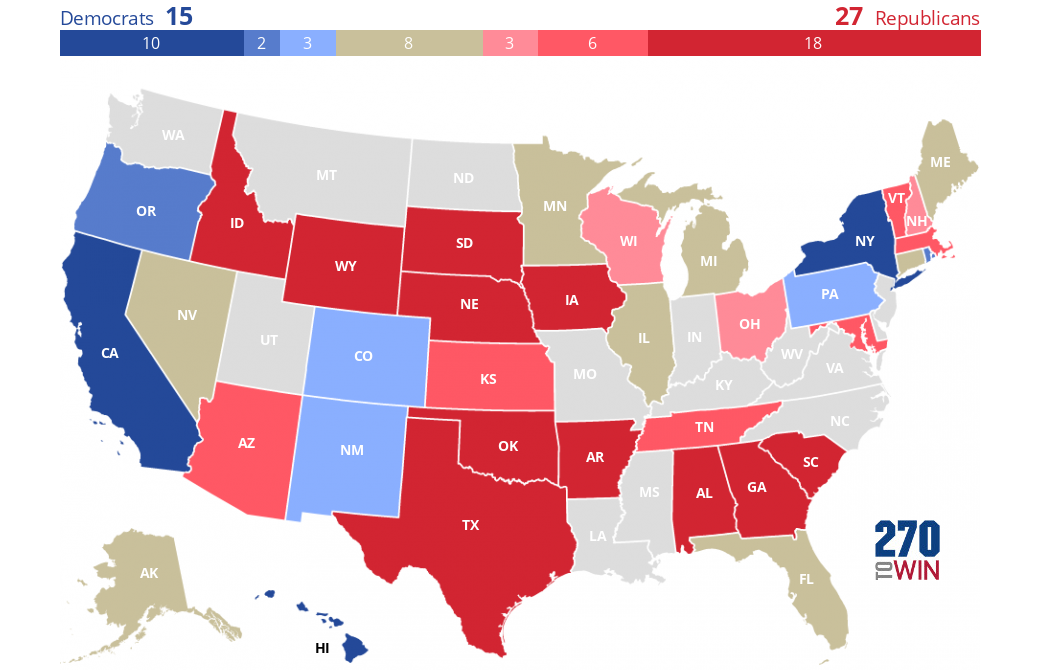 Inside Elections uses a 'tilt' rating between 'toss-up' and 'lean'. Illinois is 'tilt Democratic', while Ohio is 'tilt Republican'. We show these as 'lean' on the map below. Alaska is 'lean' independent. 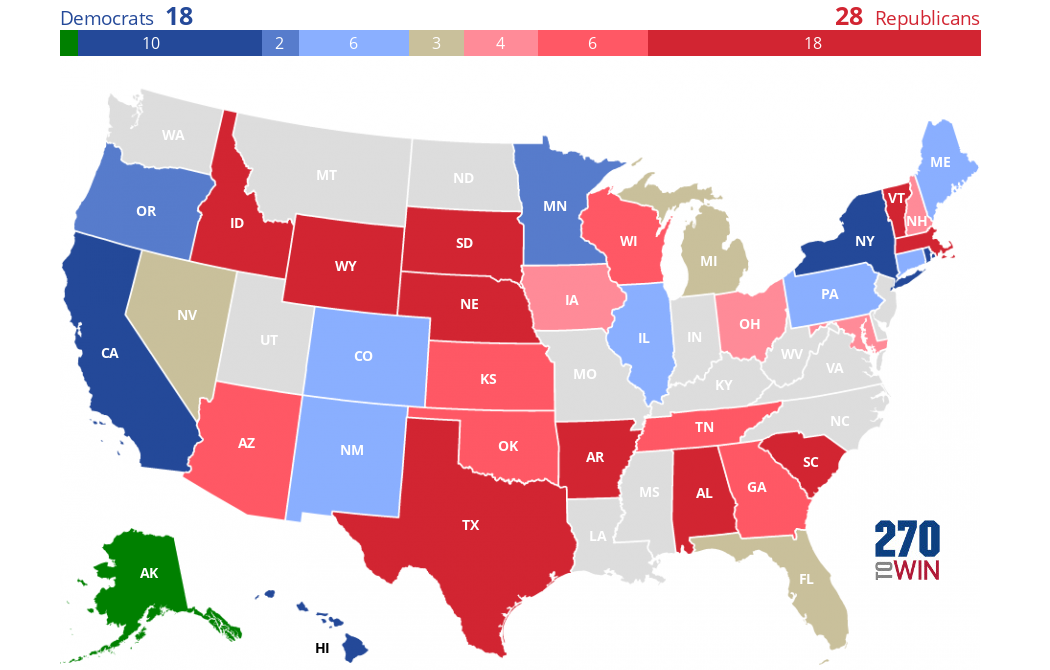 ^ Assumes no early departures due to death or resignation. New Hampshire and Vermont have two-year terms; those seats will be contested again in November, 2020. It is a moot point with Vermont, as the state has one at-large congressional district.