Sabato's Crystal ball has made three changes to its gubernatorial ratings, all favoring the incumbent. These moves leave Montana as the only highly-competitive race among the eleven governorships up for election in 2020.

In North Carolina, Gov. Roy Cooper is favored to win a second term; that rating moves from Leans to Likely Democratic.  Meanwhile, incumbents Chris Sununu in New Hampshire and Phil Scott in neighboring Vermont each look likely to win a third term - those go from Leans to Likely Republican. Those two New England states are the only ones where terms are two years instead of four.

In Montana, Democratic Gov. Steve Bullock is termed out; his entry into the U.S. Senate race against incumbent Republican Steve Daines has made that race much competitive. The gubernatorial race is still taking shape; both parties have competitive primaries on June 2 and the general election is seen as a toss-up.  It is a little surprising that these statewide races are so competitive in a year where President Trump is expected to easily win the state's three electoral votes.  Drew Savicki will discuss Montana politics in the next Road to 270 installment on Monday.

Click the image below for an interactive version of the forecast. 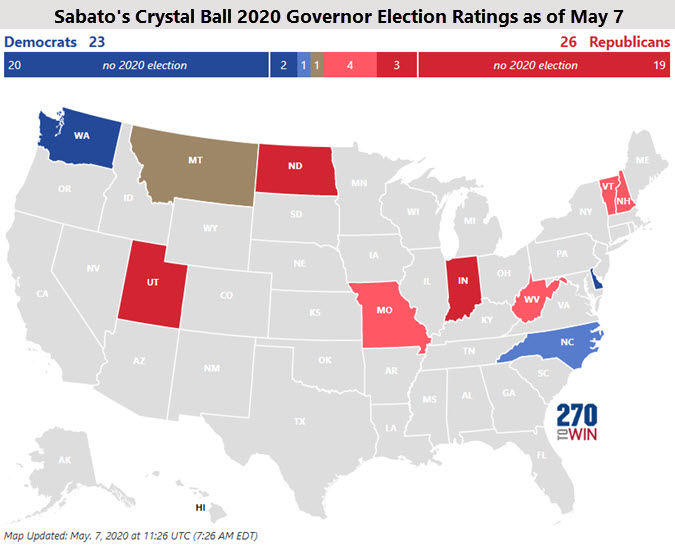