This week's 5 East Coast primaries, dominated by Hillary Clinton & Donald Trump, have moved those candidates much closer to a general election meeting on November 8th. 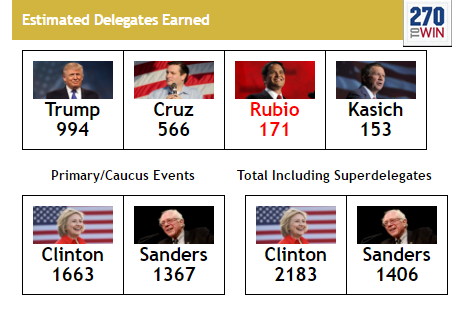 On the Republican side, after sweeping all five states on Tuesday, Trump is now just short of 1,000 delegates. While he outperformed across the board, his biggest boost is coming from Pennsylvania, where he seems to getting the support of the majority of the state's 54 elected, unbound delegates. According to the AP, Trump has thus far secured the commitment of 40 of those, to just 4 for Ted Cruz. While these unbound delegates can theoretically change their mind, the AP is usually pretty conservative with their allocations.

Trump Sweeps Five States, Clinton all but RI; Both Move Closer to Nomination

Donald Trump and Hillary Clinton made substantial progress toward their respective party nominations Tuesday night. Trump won all five primaries, while Clinton won four of five. The delegate counts updated as of 8AM Wednesday: 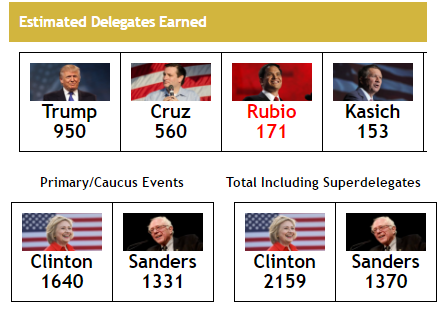 Trump swept to victory in five East Coast states Tuesday, in the process mathematically eliminating Ted Cruz from winning the nomination outside a contested convention. Trump won at least 105 of the day's 118 delegates, and is sitting at 950 as of Wednesday morning. 1,237 are needed to win the nomination. 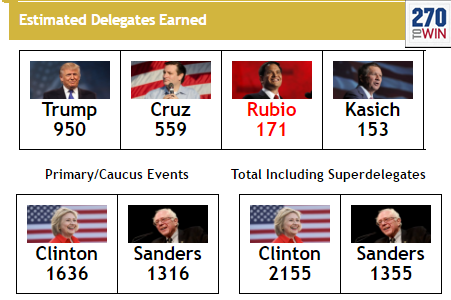 The polls are open until 8PM* in the five Northeastern and Mid-Atlantic states holding their primaries today. It looks to be a good day for frontrunners Donald Trump and Hillary Clinton. Let's take a look at what that might mean for the delegate counts. Keep in mind these are rough projections; there's not much to go on at the congressional district level where a decent chunk of the delegates will be awarded.

Republican: The image below is from our interactive delegate calculator, where you can create your own forecast of whether Trump will reach the necessary 1,237 delegates before the Republican Convention.

This is our overview of Tuesday's Democratic primaries. We've already published one for the Republican primaries.

Democratic voters in five East Coast states head to the polls on April 26th, as Hillary Clinton looks to build on her strong showing in New York last Tuesday. As in that state, the demographics and polls point toward another good day for her, one that will likely put her within a couple hundred delegates of clinching the Democratic nomination.

Cruz, Kasich Team Up to Block Trump's Path to 1237 Delegates

Politico reports that "Ted Cruz and John Kasich have begun coordinating their campaign strategy to stop Donald Trump, an abrupt alliance announced Sunday night that includes Kasich quitting his efforts in Indiana and Cruz clearing a path for the Ohio governor in Oregon and New Mexico."

The Trump campaign fired back, blasting the "collusion" between the two campaigns.

270toWin: On its face, this deal would seem to benefit Cruz much more than Kasich, although its unclear how much overall impact it will have (or how long it will last). It might make a difference in Indiana, where recent polling shows a fairly competitive race between Trump and Cruz. That state offers 57 delegates that are winner take all (30 based on state result, 3 in each of the 9 congressional districts).

On the eve of Tuesday's five-state primary, Public Policy Polling has released a set of polls for three of those contests. The firm surveyed Pennsylvania, Connecticut and Rhode Island.

On the Republican side, Donald Trump looks to have a very good day. He's above 50% in all three states, about 25 points ahead of his closest competitor. Trump also shows much higher favorability ratings in these three states.

Voters in five Northeastern and Mid-Atlantic states head to the polls on April 26th as the primary schedule remains on the East Coast after this past Tuesday's New York primary. As in that state, the demographics and polls point toward another good day for Republican frontrunner Donald Trump.

Trump currently leads the Republican field with 845 delegates, nearly 300 ahead of Ted Cruz. After New York, Trump is the only candidate with a plausible path to gathering the required 1,237 delegates needed to win the nomination prior to the Republican Convention. 118 pledged delegates will be up for grabs on Tuesday, with another 54 unbound delegates being elected directly (in Pennsylvania).

A recap of where things currently stand for each contest follows, including a discussion of the delegate allocation procedure, as we understand it. The poll hours, all Eastern time, are believed accurate, but you should not rely on them to vote. (It does look like the polls close at 8PM in all five states). Click/tap a state name for more details.

We've launched the remaining interactive historical maps. These 59 maps let you alter the course of history by changing the outcome of any prior presidential election. You can modify results, winners and election participants. 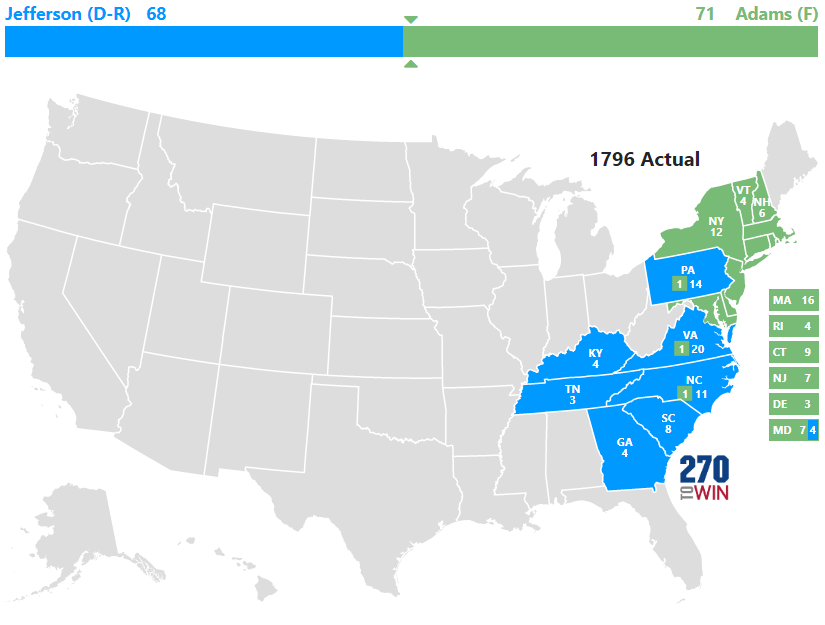 Outperforming even the most favorable polls, Donald Trump and Hillary Clinton scored huge victories in Tuesday's New York primary, significantly expanding their delegate leads while reestablising themselves as clear frontrunners to meet in the November general election. 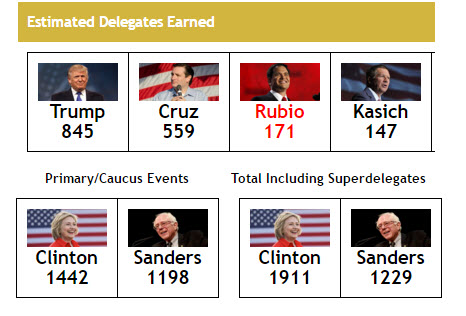 Republican: Earning over 60% of the vote, Trump won at least 89 of the state's 95 delegates. John Kasich finished 2nd, with 3 delegates. As of this morning, 3 delegates remain to be awarded. The win gives Trump an almost 300 delegate lead over Ted Cruz. The Kasich delegates were the first he's earned since winning his home state of Ohio in mid-March. Kasich remains behind Marco Rubio, who has long since departed the race. Trump needs about 53% of the remaining delegates to win the nomination, while the path for Cruz, outside a contested convention, has become nearly mathematically impossible.