Bernie Sanders continues to lead all candidates in the latest Granite State Poll of Democrats for the New Hampshire Primary. The Senator from neighboring Vermont gets 30% support.  Joe Biden and Pete Buttigieg are statistically tied in 2nd; The three-point margin for Biden is well within the margin of error.  No other candidate received more than 5% support.

Buttigieg, who barely registered in the prior Granite State Poll seven weeks ago, saw his support rise to 15% in the latest survey. Sanders lead grew from 4% go 12% over Biden, as the two moved in opposite directions. Sanders gained 4 points, while Biden lost the same. The big loser was Sen. Kamala Harris, who fell from 10% to 4%.

For the two most well-known names, this poll is a bit at odds with one released a couple weeks back from St. Anselm College. That survey gave Biden a 23% to 16% lead over Sanders. The chart below shows those averaging over 3% in these two polls; select the image for full results.

On the GOP side, President Trump held a commanding 76% to 10% lead over John Kasich. A declared candidate, former Massachusetts Gov. Bill Weld, received 5%.

Massachusetts Rep. Seth Moulton said Monday that he is entering the 2020 presidential race. His announcement video highlighted his military service and the country's economic anxiety.

Moulton is the 20th notable candidate in the historically large 2020 Democratic field. The list includes fellow Reps. Tulsi Gabbard (HI-02), Tim Ryan (OH-13) and Eric Swalwell (CA-15), as well as Moulton's former House colleagues John Delaney and Beto O'Rourke.  Of these, only O'Rourke has gotten significant traction to this point. The launch comes just days ahead of the expected entry of former vice-president Joe Biden.

Moulton has agitated for change throughout his short political career, rankling many colleagues.  He used that messaging to defeat long-time Rep. John Tierney in the 2014 Democratic primary for the 6th district seat he now holds. More recently, he was one of the more outspoken members of a coalition pushing for an alternative to Nancy Pelosi serving a 2nd tenure as Speaker. 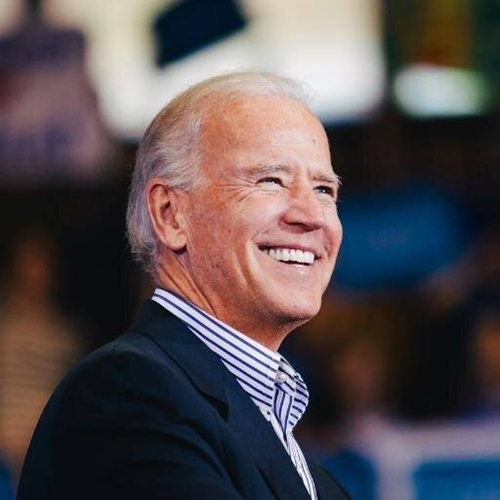 The biggest open question related to the 2020 Democratic field is likely to be answered next week. Former Vice President Joe Biden is expected to announce he is running for president.

This will be Biden's third try for the presidency. His 1988 run was over by the autumn of 1987, falling victim to a scandal around plagiarism. In 2008, he placed fifth in the Iowa caucuses and immediately withdrew from the race. He would go on to be Barack Obama's running mate that year, serving two terms as vice president. He passed on a 2016 run after delaying his decision by several months following the death of his son, Beau.

With near universal name recognition, Biden has led much of the early polling of the large Democratic field. However, some of that support has eroded in the most recent surveys. Some of this may be due to other candidates becoming more well known as Biden made up his mind. For example, South Bend mayor Pete Buttigieg has seen a spike in his support in recent weeks.  It may also be due to the accusations of inappropriate touching brought by several women.

According to this article in The Atlantic, "[Biden] sees a clear path down the middle of the party, especially with Bernie Sanders occupying a solid 20 percent of the progressive base, and most of the other candidates fighting for the rest. And the announcement comes at a moment when many in the party have become anxious about Sanders’s strength, with some beginning to wonder whether Biden might be the only sure counterweight to stop him from getting the nomination."

Terry McAuliffe Takes a Pass on 2020; an Updated List of Those Running

Former Virginia Gov. Terry McAuliffe said Wednesday he will not seek the Democratic nomination in 2020. McAuliffe would have faced a long shot bid given his appeal overlaps with those likely to support Joe Biden. The former vice president may officially join the race as soon as next week.

19 candidates have thus far announced their intention to run for president. Decisions are pending by six more, the most notable of which is the aforementioned Biden. Rep. Seth Moulton of Massachusetts is also likely to announce that he is running in the days ahead.

Here's the latest list of announced and prospective Democratic presidential candidates. it is sorted by the current national polling average.  Keep in mind that polling at this point is largely driven by name recognition. 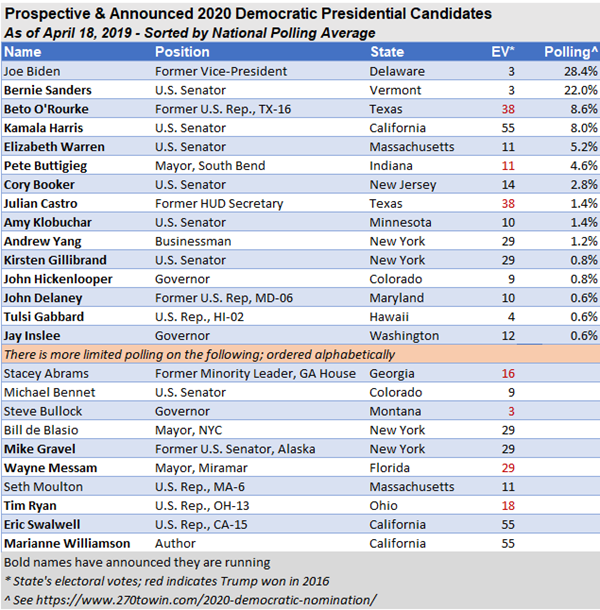 Weld had previously announced he was exploring a challenge to the incumbent president. As we noted at the time, "the history of serious incumbent primary challenges in the modern era is not a good one - either for the challenger or the sitting president. A strong primary challenge highlights fractures in a party, and often weakens the incumbent in the general election. We saw this most recently in 1992, where George H.W. Bush fended off Pat Buchanan, but lost the general election to Bill Clinton. Interestingly, that situation is somewhat the mirror of today. Trump represents the now-ascendant populist wing of the party, while someone like Weld would potentially appeal to the type of GOP championed by the Bushes."

Maryland Gov. Larry Hogan has also been considering entering the race. This article from fivethirtyeight discusses the difficult time he (or any challenger) would have against a president so popular with his own party.

Recap of some polls that were released this week.

Iowa: The state kicks off the 2020 vote with its caucus on February 3. A Monmouth University Poll showed former vice-president Joe Biden in front with 27%, followed by Sen. Bernie Sanders at 16% and South Bend mayor Pete Buttigieg at 9%.

New Hampshire:  The nation's first primary is scheduled for February 11.  A St. Anselm College poll also had Biden, Sanders and Buttigieg in the top three slots, with 23%, 16% and 11%, respectively. Sen. Elizabeth Warren of neighboring Massachusetts was at 9%.

South Carolina: The final early primary state will hold its contest on February 29, just three days before Super Tuesday. Change Research found Biden with 32% support, Sanders 14% and Sen. Kamala Harris in 3rd at 10%. Georgia's Stacey Abrams was included in this survey; she finished in 6th place with 7%.

In its latest weekly survey of registered Democrats nationwide, Morning Consult finds former vice-president Joe Biden with 32% support. This is 9 points over the 23% received by Vermont Senator Bernie Sanders. No other prospective nominee broke into double digits.

Biden's undeclared candidacy hit its first rough spot when former Nevada assemblywoman Lucy Flores made the initial allegations of unwanted touching against him in an article published March 29. Several other women have subsequently come forward, with Biden's response thus far not seeming to diffuse the situation.

However, the controversy doesn't seem to have had a notable impact on Biden's standing among Democratic primary voters. In Morning Consult's March 26 survey - a few days before the story broke - Biden had 35% support. His current 32% is right in the middle of the 29-35% range he has received in each Morning Consult survey since early February.

The full results from this week's Morning Consult survey are below. We're tracking all the national polls here. 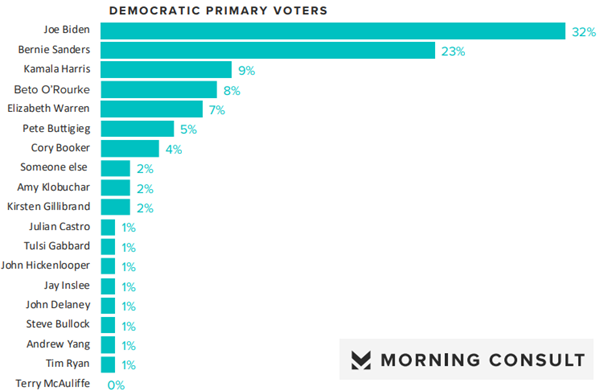 Massachusetts is one of a dozen states currently scheduled to hold its primary on Super Tuesday, March 3, 2020.

Note that some of the information on the pages referenced here is preliminary and subject to change. You can find election calendar and party primary/nomination links in the 'President' menu on the page header above.

As usual, Iowa will hold the first presidential nominating contest in 2020. Its caucuses will be held on February 3. This will be followed by February contests in the other traditionally early voting states of New Hampshire, Nevada and South Carolina. Super Tuesday follows on March 3. That date will be even more prominent in 2020 as California moves up its traditional June primary. By the end of March, events covering well over 50% of each party’s delegates will have taken place. The party conventions are in July, with the 2020 presidential election scheduled for November 3, 2020.

2020 Democratic Nomination: A historically large field is shaping up for the opportunity to take on President Trump. Given the party's proportional delegate allocation process - and the front-loaded 2020 election calendar - it is quite possible that no candidate will amass a majority of delegates before the party's Milwaukee convention. On the other hand, because there's a minimum vote threshold (15%) to win any delegates in a contest, it is also possible that a candidate could build a large delegate lead without broad party support.

Depending on how the above plays out, a rules change may have significant ramifications as well. Beginning in 2020, what the party is now calling 'automatic delegates' will no longer vote on the first ballot at the convention unless there is no uncertainty about the outcome. More commonly known as superdelegates, these party insiders are not pledged to a specific candidate.  These delegates were controversial in 2016, as the majority of them announced early support for Hillary Clinton, creating the perception that the party was putting its thumb on the scale in her favor against Bernie Sanders.

The map below shows the month for each nominating contest; locations in gray have not yet set a date.  For now, the map shows estimated total delegates (including superdelegates). On the map page - click the image - we've also listed the national polls. Click any state on the map for polls and more information on their primary or caucus. 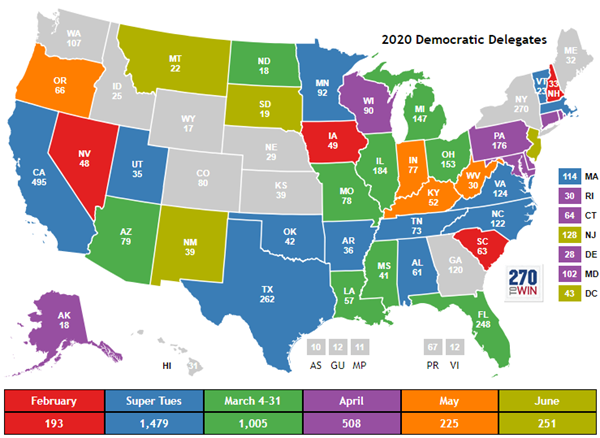 2020 Republican Nomination: Barring a credible challenge to the president, the GOP nomination is a foregone conclusion. We do have a delegate map here, with state-level information also available regarding dates and allocation methods, which do vary by location.

Credits: Much of the calendar and delegate data is sourced from FHQ and The Green Papers. These are invaluable resources --- check them out.

New Mexico Rep. Ben Ray Luján announced Monday (video) that he will run for U.S. Senate in 2020. The seat is being vacated by fellow Democratic Sen. Tom Udall, who is retiring.  Luján will seek to replicate the 2008 election, where he won his current job as then Rep. Udall departed to seek the U.S. Senate seat.

Luján is the 4th ranking Democrat in the U.S. House.  His safely Democratic 3rd district covers much of the northern half of the state. Luján won a 6th term by 32% last November, while Hillary Clinton won here by 15% over Donald Trump in 2016.