Update:  The Census Bureau released official apportionment data on April 26, 2021.  The data was delayed several months due to the pandemic. In the end, fewer states were impacted than the prior estimate.   Texas gained two seats and Florida one, vs. the three and two previously estimated.  11 other states gained or lost a single seat. Previously expected to lose a seat, there was no change in Alabama, Minnesota and Rhode Island.  Likewise, Arizona did not gain a seat.

This apportionment data also updates the electoral map for 2024 and 2028.

The information below is outdated.

On Monday, the Census Bureau released U.S. population estimates (data here) as of July 1, 2019. This is the final annual update before the 2020 Census, which will set the population of the United States as of April 1, 2020.

The Census results will lead to a reapportionment of the 435 congressional districts across the 50 states. The official changes should be known in late December, 2020.  This will kick off a redistricting effort in most states during 2021. Boundaries will be redrawn, with districts added or combined in those states that will gain or lose representation.

However, the new estimates allow for a pretty good projection of where things will end up. For the 2nd consecutive decade, Texas (+3 seats) and Florida (+2 seats) look to be the big winners. They were also the only two states to gain more than one seat in 2010. Arizona, Colorado, Montana, North Carolina and Oregon are projected to gain one seat. As the number of districts is fixed, these 10 seats must come from somewhere else.   One seat is expected to be lost by each of Alabama, California, Illinois, Michigan, Minnesota, Ohio, New York, Pennsylvania, Rhode Island and West Virginia. 33 states will see no change.

If this estimate proves accurate,

Voters will choose representatives in the redrawn districts beginning with the 2022 midterm elections.

The new electoral map will be effective with the 2024 presidential election. There are no changes to the 2020 map from that used in 2016.

Since each state receives electoral votes equal to its congressional delegation (House + 2 Senators), there is a 1:1 relationship between the change in House districts and electoral votes.

The projected 2024 electoral map is seen below; click or tap it for an interactive version. Had this map been in place in 2016, Donald Trump would have won 309 electoral votes, 3 more than he actually won (excluding faithless electors). 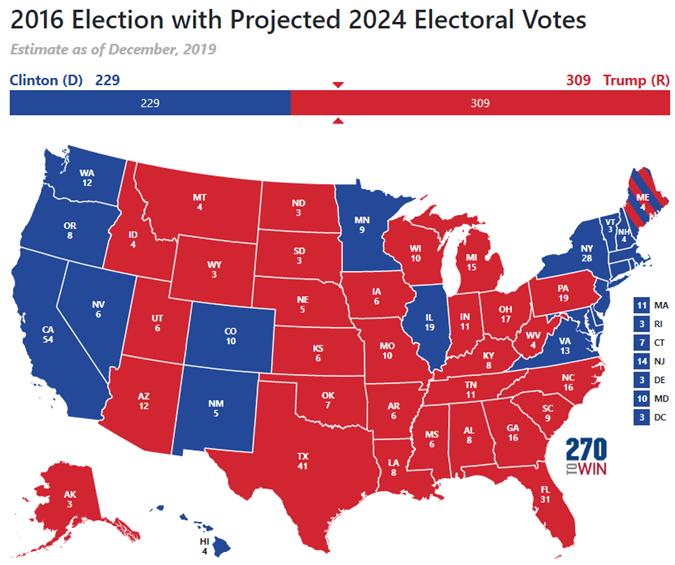