Last week, Wisconsin state Rep. Gary Tauchen (R) introduced a bill to change how the state allocates its electoral votes.  If enacted, the state would move from the winner-take-all allocation currently used in 48 states to that of Maine and Nebraska. Those two states use the congressional district method, awarding two electoral votes to the popular vote winner of the state and one to the popular vote winner in each congressional district.  U.S. Rep. Bill Huizenga (R, MI-02) has suggested his state do the same.

At nearly the same time, Nebraska state Sen. Julie Slama sponsored a bill to switch that state back to winner-take-all. (Slama is a Republican, although the single body Nebraska legislature is officially nonpartisan.)

These proposals seem to pop up after each election. While often couched as fairer, the proposals are almost always partisan in nature, meant to benefit the electoral college fortunes of the party that introduces the bill.  That is the case in all the above.  The 31 electoral votes associated with the above 3 states went 27-4 for Joe Biden in 2020. If the proposed approaches had been in place, Donald Trump would have received 19 of them to 12 for Biden.

This is an estimate, as the data is not fully available yet. Most states do not break out votes by congressional district, so it falls on a 3rd party to do the number crunching. We use calculations by Daily Kos.  Whether or not you agree with that site's politics, they do excellent work with election data.  We've projected the outcome in each state where the data isn't yet available, looking at the margins in both the 2020 congressional and 2016 presidential elections.

The net result is a very narrow 274-264 estimated Biden win if this approach were used. Both candidates won 25 states, giving them 50 electoral votes. On top of that, we project Biden to have won 221 districts to 214 for Trump. Finally, we allocate the 3 Washington, DC votes to Biden, where he won 93% of the popular vote.

It is important to note that even if this map ends up being 100% accurate, it is unlikely that the election would have turned out exactly this way. Campaigns make strategic and tactical decisions based on getting to 270 electoral votes. They would undoubtedly allocate resources differently in an election run under these rules. 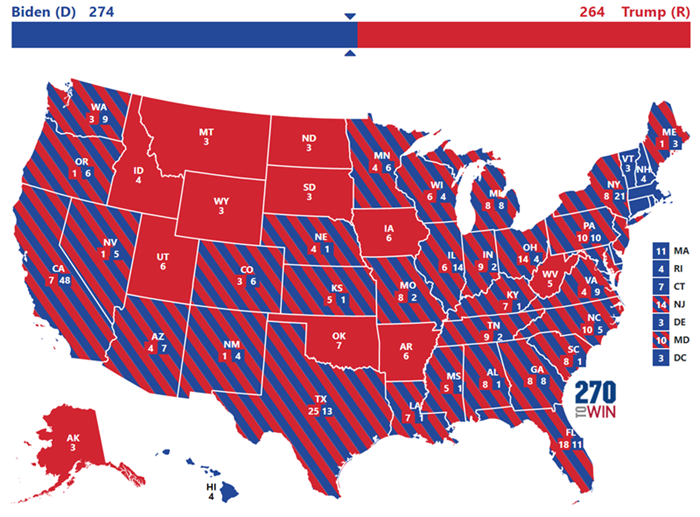 Would this be an improvement over winner-take-all?

The appeal of a more proportional allocation of electoral votes in each state is understandable. Unfortunately, in the real world, this particular method is not a good solution.  There are rarely more than a few dozen competitive congressional districts each cycle. This is because most congressional districts are drawn by politicians - usually a state's legislature - with the party in control at the time of redistricting looking to create district lines to their benefit. This gerrymandering would become exponentially worse if it helped dictate the outcome of presidential elections.  And, in fact, it would. There will likely be fewer than 15 districts in 2020 where the winning congressional and presidential party is different.

To see how this (and other methods) fared in the 2012 and 2016 elections, see this article on Gaming the Electoral College.