Former Vice President Joe Biden remains well out in front of the large 2020 Democratic field, two new national polls find. In the Morning Consult weekly tracking poll, Biden is at 38%, twice that of Vermont Senator Bernie Sanders, who is at 19%. Elizabeth Warren is third at 10%. These numbers have changed little in recent weeks.

CNN finds Biden at 32% with Sanders at 18%. No other candidate reaches double-digits. Biden dropped 7 points from the 39% he received in that organization's late April poll, which was released just after he formally entered the race.

Overall, the 270toWin national polling average has Biden at 34%, Sanders 18% and Warren 11%, with these new polls not impacting the numbers very much.  The race seems to have stabilized for now; that may well change after the first Democratic debate in 3 weeks. 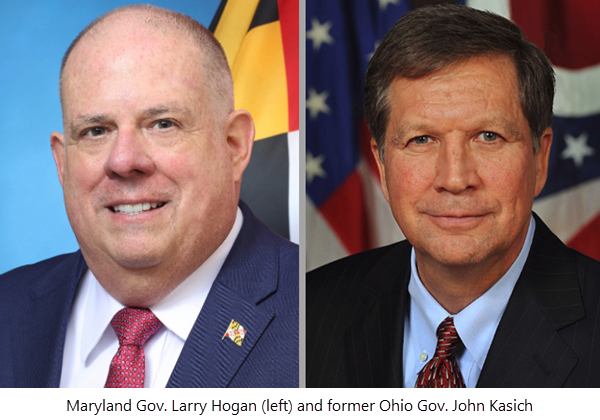 Gov. Larry Hogan of Maryland said in an interview that he would not challenge President Trump for the Republican nomination in 2020. The comment came just a day after former Ohio Gov. John Kasich said the same on CNN.

The decisions leave limited options for the "Never Trump" wing of the Republican Party. Thus far, the only notable challenge to the president has come from former Massachusetts Gov. Bill Weld. However, he has not won an election since 1994 and has gained little traction thus far.

Nevada's Democratic Gov. Steve Sisolak vetoed a bill Thursday that would have seen the state join the National Popular Vote compact. Sisolak said that smaller states, like Nevada, could see their influence wane in presidential elections should the initiative take effect. This is the third time the state has failed to join, although the first time a bill has made it as far as the governor's desk.

14 states and Washington, D.C., with a total of 189 electoral votes have so far approved the initiative. It would take effect^ once that total reached 270, the number needed to win the presidency. States in the compact agree to award their electoral votes to the winner of the nationwide popular vote, a choice that could differ* from that made by its own citizens. (Article II of the Constitution leaves it to the legislature of each state to decide how it wishes to allocate its electoral votes). 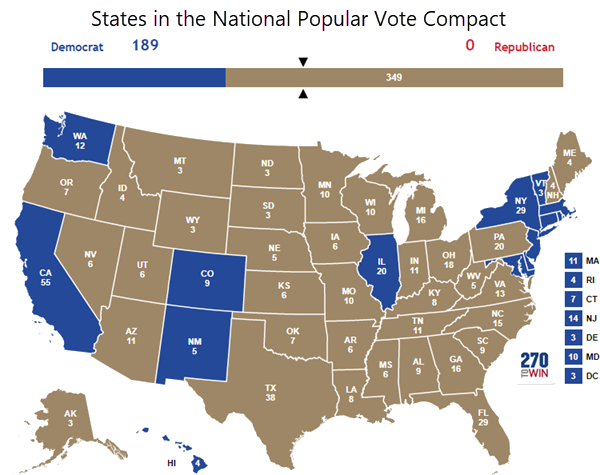 There's been little interest in this proposal from traditionally red states. Many of them are smaller and thus over-represented in the Electoral College. Additionally, two of the past five elections (2000 and 2016) have seen the electoral and popular votes diverge. Republicans were the beneficiary in both cases.

^ Any actual implementation would likely be delayed by legal challenges over the constitutionality of the approach.

* In Nevada's case, that is pretty rare. Aside from 2016, when it voted for Clinton, and 1976, the state has voted for the winner in every presidential election since 1912.

The Democratic National Committee announced stricter debate qualifying rules on Wednesday. These will apply for the party's September and October events. This should help to reduce the historically large field of prospective nominees as the first nominating contests approach.

Candidates will need to reach 2% in four approved polls between June 28 and August 28. By that August date, contributions from a minimum of 130,000 unique donors must also be received. Each of these metrics doubles the requirements for the first set of debates. In addition, both must be met to make the debate stage, as opposed to one or the other.

Per an Axios analysis, 18 candidates have currently qualified for the first set of debates. These will each be held over two nights, with the first scheduled for June 26 and 27 in Miami. Originally, the split was to be random, but a recent rules change will ensure that those with higher standing in the polls will also be more evenly distributed.

The full list of Democratic candidates is in the table below, along with their current national polling average and debate qualification status. 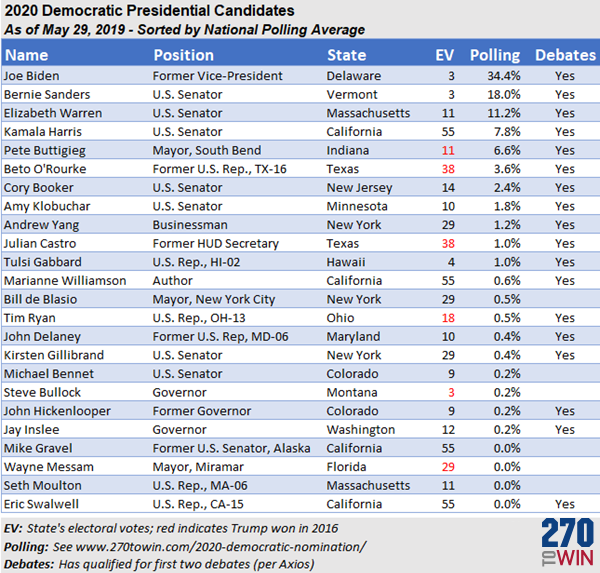 The first fall debate is scheduled for September 12, with another one in October. These will only take place across two nights if enough candidates qualify under the new rules.

Joe Biden receives 33% support in a new nationwide Monmouth University poll of registered Democrats. It's a gain of 6% from Monmouth's last survey in late April. The former Vice President's lead jumped to 18 points over Bernie Sanders, who lost five points. Aside from Biden, Sens. Elizabeth Warren and Kamala Harris moved into double-digits; they were the biggest gainers after Biden.

Overall, the results of this poll were in line with the 270toWin nationwide average. Click the image below for more information.

For those interested, we'll be introducing a Democratic delegate calculator later this summer. More details to follow.

Today is primary day in Pennsylvania. For residents in the state's 12th congressional district, there is also a special election to fill the vacancy created when former GOP Rep. Tom Marino resigned in January.  The nominees were selected by the parties, with Republican state Rep. Fred Keller meeting Democrat Marc Friedenberg, a lawyer and college professor.

Results will appear below after the polls close at 8:00 PM Eastern Time.  Reload the page for the latest.

The mostly rural 12th district is located in the central part of the state from northwest of Harrisburg to the New York line. In terms of land area, it is the largest of Pennsylvania's 18 congressional districts. The district is very conservative - Donald Trump won here by over 36% in 2016, with Marino approaching that margin in his 2018 reelection. As such, Keller is heavily favored to win.  Keep an eye on the margin, if it is significantly lower than 30% it may be an early warning sign for 2020, particularly after Trump held a rally in the district Monday 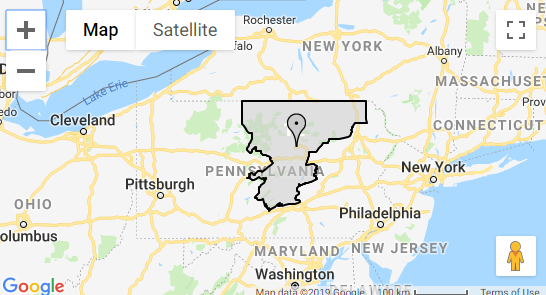 The timing of the election will work against turnout in a couple ways. Pennsylvania is a closed primary state, meaning only registered party members can vote in the respective primaries. Independents can vote in the special election; but it is an open question whether they will come out for this race. Additionally, the election is taking place after most students have departed Penn State for the summer.  State College is among the few Democratic-leaning areas in the district.

If you are a termed-out politician who will be available for a new job in January, 2021, why not run for president?  That's the situation for two-term New York City Mayor Bill de Blasio who launched his presidential campaign Thursday morning. He becomes the 24th Democrat aspiring to defeat Donald Trump in 2020.

De Blasio is the third sitting mayor to join the race. Also running are South Bend Indiana's Pete Buttigieg and Wayne Messam, of Miramar, Florida. No sitting mayor has ever been elected president.

Ten names are on the ballot Tuesday for the Republican primary in North's Carolina 9th congressional district. Depending on the outcome, either a runoff or the special election will take place on September 10.  The eventual nominee will face Dan McCready - who is unopposed for the Democratic nomination - to fill a congressional seat that has been vacant since the start of the 116th Congress in January.

Results will appear below after the polls close at 7:30 PM Eastern Time.

Three late April polls showed State Sen. Dan Bishop as the frontrunner, with 30-36% of the vote. Bishop is most well-known for sponsoring the state's "bathroom bill", which gained wide notoriety before being partially repealed in 2017. County Commissioner Stony Rushing was seeing between 17-19% support and, if the polling proves reasonably accurate, is likely to finish 2nd. Two others, County Commissioner Matthew Ridenhour and Realtor Leigh Brown also seem to be viable.

30% needed to avoid a possible runoff

If no candidate reaches 30% of the vote, the 2nd place candidate can request a runoff. However, it is not required.  Rushing has said he will not pursue a runoff if he finishes 2nd to Bishop, although he would have nine days to change his mind. If a runoff is required in September, the general election will take place on November 5.

How did we get here?

The GOP incumbent, Robert Pittenger, lost the 2018 primary to Mark Harris, a pastor. Harris went on to what appeared to be a narrow win over Marine veteran Dan McCready in the November midterms. However, that result was never certified due to allegations of fraud. In late February, after a multi-day hearing, the State Board of Elections ordered a new election to be held.  Harris chose not to pursue a rematch with McCready, who faced no opposition from within his party.

Although Donald Trump won this district by about 11.5% in 2016, the 2018 race between Harris and McCready was expected to be highly competitive and turned out that way. Harris received about 900 more votes than McCready on Election Day.  As of now, most pundits see the special election to be a toss-up. However, those ratings could change once the GOP nominee and the date of the special election (September vs. November) are known. If Bishop is the Republican nominee, the race will likely take on a larger national profile.

Bullock is likely to be one of the final notable entrants in a Democratic field that now numbers 23. That list is below, ordered by the current national polling average.  18 of these candidates have qualified for the first two debates in June and July. The field is capped at 20 (candidates will be split randomly across two nights). If more than 20 become eligible, a tiebreaker process will be used. 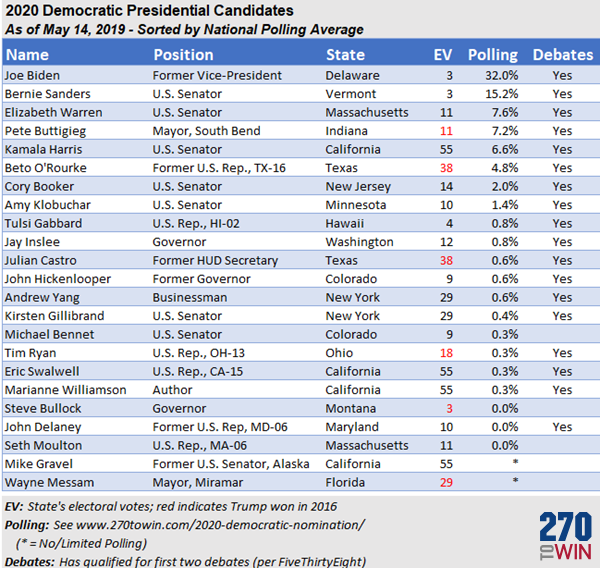 Joe Biden is at 46% in a new poll of likely South Carolina Democratic primary voters. This is a large uptick from the 32% that the same pollster gave Biden about a month ago, prior to his formal entry into the race. In a field of over 20 presidential hopefuls, the former Vice President now has almost as much support in The Palmetto State as all the other candidates combined. 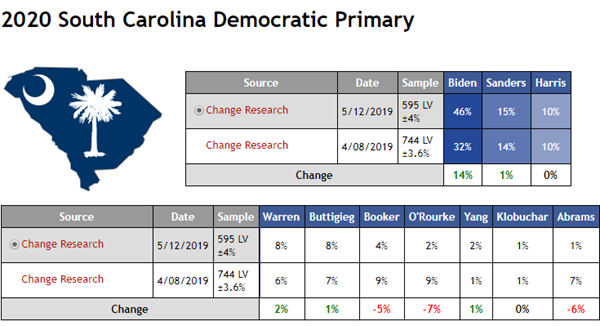 Vermont Senator Bernie Sanders was 2nd at 15%, with California Sen. Kamala Harris 3rd at 10%. Both those numbers were little changed from a month ago. Biden's large gain appears to have come at the expense of Cory Booker, Beto O'Rourke and Stacey Abrams, who each lost 5% or more of their support.

For those interested, we have a new page that displays who is polling in the top 3 for those places where polling is available. It includes a link to the polling detail for each state.  Keep in mind that polling is pretty limited at this point; several of these states only have one survey thus far.