A few weeks back, we did a preliminary calculation of the 2020 electoral map if all states allocated electoral votes like Maine and Nebraska.  Those two states award two electoral votes to the popular vote winner and one each to the popular vote winner in each congressional district.  In 2020, this created a split in both those states: Trump won Nebraska while Biden won District 2; the opposite happened in Maine.

Most states don't report presidential results by congressional district so it falls on a third party to map precinct/county reporting to districts. DailyKos does excellent work in this area; we've largely relied on their data for the map below.  There are still 5 states where the information isn't complete, including New York and Pennsylvania. However, this article on crossover districts by J. Miles Coleman at Sabato's Crystal Ball fills in those blanks for us. This updated map should be final (or very close).

Applying the congressional district method nationwide, Joe Biden still wins but by a narrower 277-261 result. While the approach might seem like a fairer one at first glance, it fails that test in the real world where many districts are heavily gerrymandered.  Politics would have to come out of the redistricting process to make this a viable alternative to winner-take-all. That's not going to happen.

One other caveat - this is a backwards look at 2020 to fit rules that were not in place for the election.  Campaign resources would have been deployed differently if they had been, likely leading to a different winner in some districts.

In the map below, the primary color is based on the statewide popular vote winner.  All three Washington, DC votes are allocated to Biden, as he won 93% of the popular vote. 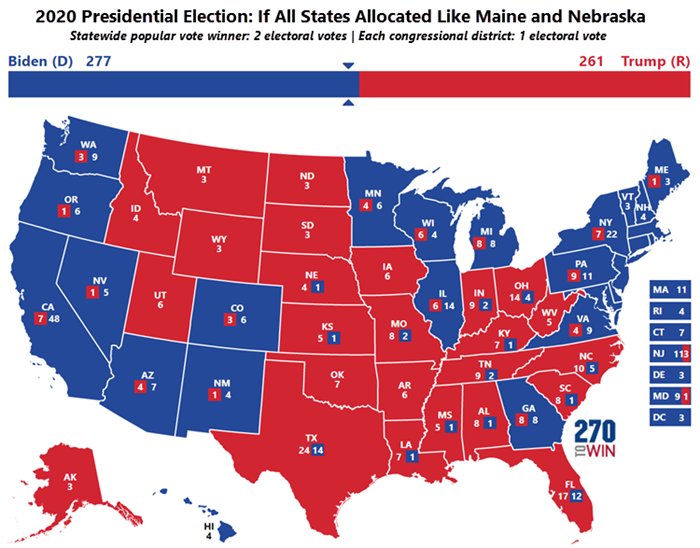 The congressional race in NY-22 remains undecided. Donald Trump is likely to have won that district and the GOP nominee for Congress, Claudia Tenney, remains slightly ahead as that race is litigated. Subject to change, we've treated it as a Trump/GOP district on the map.