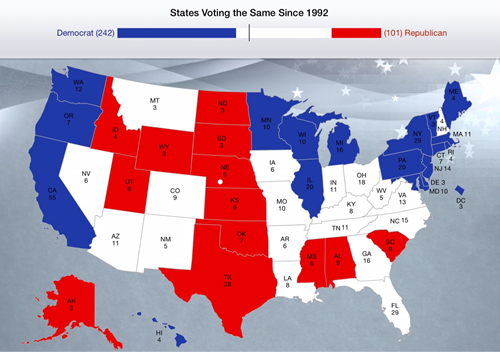 Senator Dan Coats Not Running for Reelection in 2016

Republican Indiana Senator Dan Coats announced today that he is not running for reelection in 2016. Coats won the seat in 2010 after former Senator Evan Bayh retired. This was Coats' 2nd Senate stint. He was appointed to the Senate in 1989 to succeed Dan Quayle, who had resigned to become Vice President under George H.W. Bush.

Prior to this announcement, the seat was favored to remain in Republican hands. It may become more competitive now and could be an additional hurdle to Republican retention of the Senate in 2016, as the party must defend 24 of the 34 seats up next year.

Version 1.5 of the 270toWin iPad app is now available in the App Store. In this update:

For those that haven't looked at the app since the last election, here are some changes from the prior update, version 1.4, that launched last year:

And it Begins: Ted Cruz to Announce Presidential Bid

Texas Senator Ted Cruz will announce Monday that he is running for the 2016 Republican nomination for president, CNN reports.  The first-term Senator will make his announcement at Liberty University in Virginia.  This declaration will make Cruz the first major candidate to officially launch a 2016 presidential campaign.  There are approximately 595 days until the 2016 presidential election.

It is expected that numerous other Republicans will follow in the weeks ahead.

With the usual caveat that polling is of limited predictive value this far out: Cruz has been averaging just under 5% in recent national Republican primary polls, in a group of hopefuls that have gotten some support but are trailing leaders Scott Walker and Jeb Bush. Looking to the general election, should it be Cruz vs. Hillary Clinton, early polling has Clinton with the advantage.

A new poll from CNN-ORC shows Hillary Clinton with a double-digit lead over her prospective Republican challengers for 2016. These large leads, however, are generally a few points less than when CNN-ORC last surveyed the race in December, 2014.

Republican Primary: Jeb Bush has a small lead over Scott Walker and Rand Paul, with Mike Huckabee and Ben Carson next. No Republican received more than mid teens preference. Scott Walker and Jeb Bush are virtually tied in our 270toWin national average.

Democratic Primary: Hillary Clinton received 62% of those responding, with Joe Biden at 15% and Elizabeth Warren at 10%. Hillary is polling almost 60% in the 270toWin average, with Biden and Warren battling it out for a distant 2nd.

General Election: Clinton leads by 11-16% over every prospective Republican opponent surveyed, with Rand Paul performing best. Clinton consistently came in at about 55%, each Republican within a couple points of 40%. This seems to indicate a pretty rigid adherence to party preference at this point. Whether and how much that changes as the Republicans become more well-known will go a long way to determining how competitive 2016 will be.

Politico reports Illinois Rep. Aaron Schock (IL-18) resigned Tuesday, less than 12 hours after that website raised questions about tens of thousands of dollars in mileage reimbursements he received for his personal vehicle. This is just the latest in a series of ethical questions that have dogged Schock, who recently began his 4th term. The resignation will be effective March 31.

Looking ahead to 2016, 7 other Representaives have announced they will not seek re-election. Republicans Chris Gibson (NY-19) and Mike Fitzpatrick (PA-08) are in the most competitive districts; rated toss-up by Sabato's Crystal Ball. Four Democrats in safe districts are leaving: Janice Hahn (CA-44), Donna Edwards (MD-04), Chris Van Hollen (MD-08) and Charles Rangel (NY-13). Reps. Edwards and Van Hollen are running for the Senate seat being vacated by Barbara Mikulski.  Republican Candice Miller (MI-10) is also leaving; her seat is safe for the GOP.

Michigan Tees Up Another Effort to Change Electoral Vote Allocation

A bill that would change how Michigan allocates its electoral college votes was introduced in the State Legislature this week, Michigan Radio reports. This is not the first time time the Republican-controlled legislature has attempted to modify the all-or-none allocation method in an attempt to get some of Michigan's 16 electoral votes into the column of their presidential nominee. Michigan has not voted for a Republican in a presidential election since 1988.

In the current bill, two electoral votes would go to the winner of the state's popular vote, while the remaining 14 would be allocated individually based on the winner of the popular vote in each Congressional District. This is the same methodology used in Nebraska and Maine, the only two states not following the all-or-none method.

Had this method been in place during the 2012 election, Mitt Romney would have received 9 electoral votes from Michigan, despite losing the overall popular vote by almost 10%.

To see the implications of alternate electoral college methods in each state, visit our Gaming the Electoral College feature.

Scott Walker and Hillary Clinton both receive over 50% support from their party's registered voters in a new Wisconsin Public Policy poll. However, the love for home-state the governor doesn't currently extend beyond the Republican faithful as Clinton leads him by 9 in a general election match-up.

Republican Primary: Governor Walker received 53% of the vote, far ahead of Ben Carson who polled 12%. No other Republican reached 10%. Walker has recently been polling well in other states, usually seeing around 20% Republican support. It will be interesting to see how much of this 'home field advantage' filters into future polling in other states as Walker becomes more well-known.

Democratic Primary: Hillary Clinton received 60% of those responding, with Joe Biden at 14% and Elizabeth Warren at 12%. Thus far in this year's Democratic polling, the only real battle is for a distant 2nd place.

General Election: Clinton leads by 6 to 11% over every prospective Republican opponent surveyed, with her lead at 9% over Walker. Public Policy also tested Biden and Warren against Walker; they both lead him by 3%. Wisconsin has not voted Republican since the Reagan landslide in 1984; Obama won the state by about 7% in 2012.

While many details of next year's presidential primary and caucus schedule still remain to be worked out, polling is already occurring on a fairly regular basis. Bookmark and/or visit our new Democratic Nomination and Republican Nomination pages to view national polling, with links to individual states where polling has been conducted.

Beyond 2016 primary polling, we will update the content as more information becomes available about confirmed primary and caucus dates as well as delegates and delegate allocation, including the number needed to win each party's nomination.

Public Policy has surveyed North Carolina again, one month after their last 2016 poll of that state.

Republican Primary: Scott Walker has surged ahead of the pack, picking up 24% of the vote. Jeb Bush, Mike Huckabee and Ben Carson all registered in the teens, performing very close to the last month. Walker seems to have picked up a lot of the voters who had leaned toward Mitt Romney in the prior poll.

Democratic Primary: Not much change from last month, or from most Democratic primary polls so far this cycle. Hillary Clinton has over 50%, easily besting her closest challengers, Elizabeth Warren and Joe Biden.

The above two tables are from our soon-to-launch 2016 primary and caucus pages.

General Election:  Nine Clinton vs. Republican match-ups were tested here. The bottom line is that the state looks to be a toss-up. All differences were 4% or less. Carson did the best, with a 1% lead on Clinton. As a result of this poll, we've moved North Carolina in our Rubio and Cruz polling-based electoral maps to toss-up.