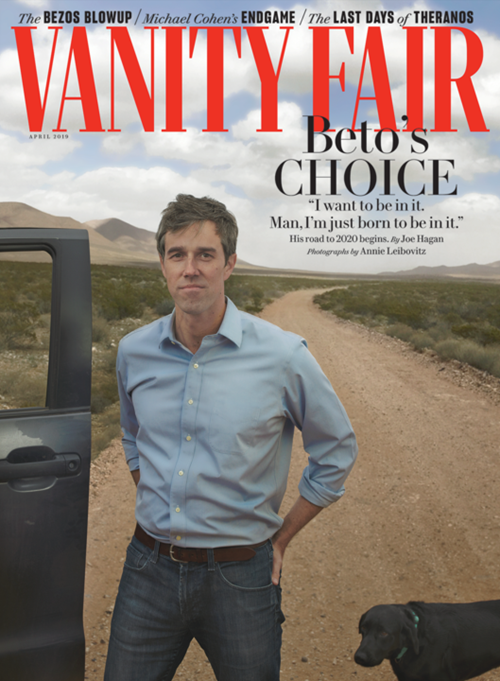 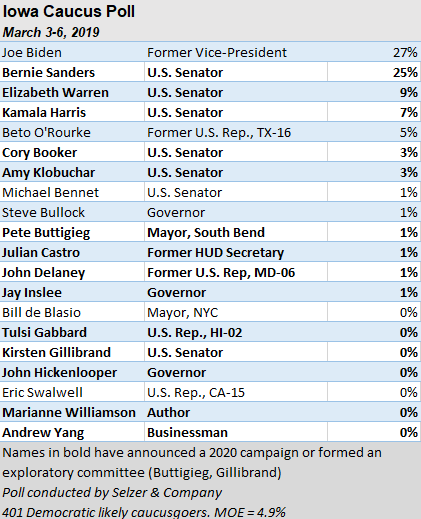 Ohio Sen. Sherrod Brown announced Thursday that he will not pursue the Democratic nomination in 2020.  His decision followed a recently completed 'Dignity of Work' tour of several states that have early primary and caucus dates. 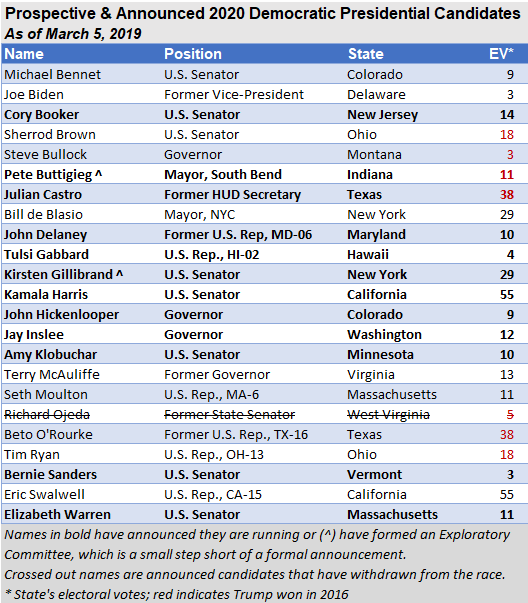 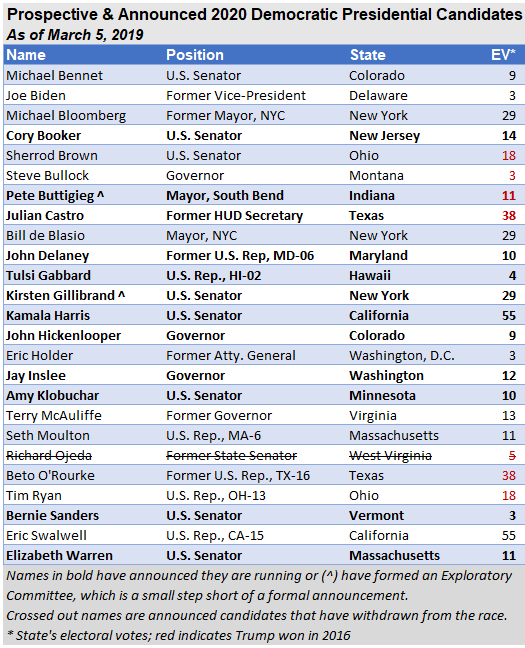 9th District: The North Carolina Board of Elections has set September 10th as the date for a special election to fill the vacancy in the state's 9th congressional district.  The seat has been vacant since the beginning of the 116th Congress in January. An apparent narrow GOP win in the midterm elections was not certified due to election fraud.

There will not be a rematch of the November race. While Democrat Dan McCready will seek his party's nomination to try again, Republican Mark Harris will not run. The primaries will be held on May 14th. If a second primary is required*, it will take place on September 10th, with the general election pushed to November 5th.

3rd District: This district became open in February, when Rep. Walter Jones (R) passed away. Gov. Roy Cooper has set July 9th as the special election date. A primary will be held on April 30th. If a second primary is required, it will take place on July 9th, and the general election will take place on September 10th.

There is a third congressional vacancy, in Pennsylvania's 12th district. Rep. Tom Marino (R) resigned in January. A special election will be held May 21st.

In terms of competitiveness, NC-3 and PA-12 are very likely to stay under GOP control. NC-9 is a toss-up.

* Per North Carolina law, a second primary (runoff) is held when no candidate receives 30% of the vote in the regular primary.

It's official: I'm asking you to interview me for President. Our country is in crisis, and we need someone who knows how to bring people together and get things done. This is my record, but I've never done it alone. Join me: https://t.co/ta7aY0lTeY pic.twitter.com/HaCnK5paBU

Hickenlooper served two terms as Colorado's governor; he was unable to run again in 2018 due to term limits. He joins Washington's Jay Inslee as the only state executives among the 12 announced Democratic candidates; 6 of whom are U.S. Senators. Hickenlooper is socially liberal and pro-business, and is among the more centrist candidates in the field.

Washington Gov. Jay Inslee said Friday that we will seek the Democratic nomination for president in 2020. Inslee made the announcement via a video focused almost entirely on climate change. In the video, Inslee says he's running for president "because I'm the only candidate who will make defeating climate change our nation's number one priority."

VIDEO: This is our moment, our climate, our mission — together, we can defeat climate change. That's why I'm running for president. Join #OurClimateMoment today https://t.co/zg8ILGyk0Z pic.twitter.com/pUZVxyzfc5 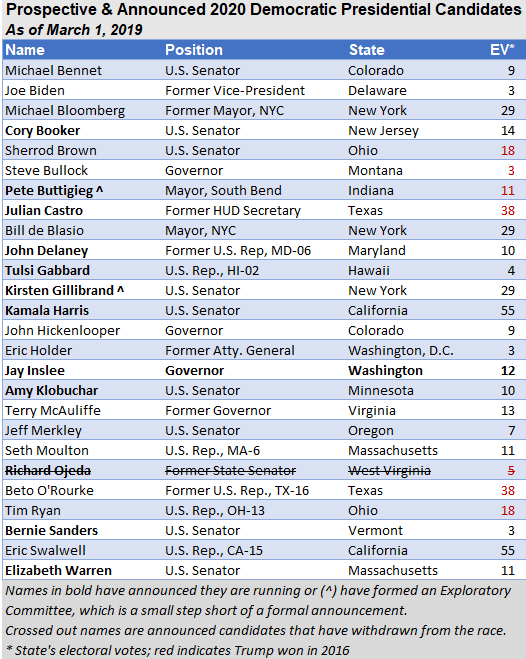 The team at Larry Sabato's Crystal Ball is out with their initial look at the 2020 presidential election.  They see the race starting as a toss-up, although few states are individually characterized that way.  Their analysis gives the GOP a 248-244 edge, although Democrats have the edge in states that are safely in their column. The map is below; click for an interactive version. Notably, Florida starts with a leans Republican designation, while Michigan is seen as leans Democratic. Both these states were narrowly carried by President Trump in 2016. Florida statewide elections, while always close, have mostly broken for the GOP in recent years. This includes the Senate and gubernatorial races in the just-completed midterms. Of the blue wall states flipped by Trump in 2016, Michigan was the closest, with 2018 results and demographics making the eventual Democratic nominee a slight favorite next year.

Both these rating characterizations appear to have been close calls. Perhaps the most important takeaway at this early stage is the implication should the ratings shift in the opposite direction: "Just as we think Florida going blue would probably mean a Democratic presidential victory, so too do we believe that a Republican win in Michigan probably would mean that the GOP is retaining control of the White House. So if we move either to Toss-up, it may mean that a favorite is emerging in the presidential race overall."

This feature can be found below the interactive electoral map. As you shift the forecast, the number of paths to 270 electoral votes will automatically update. Click 'View all Combinations' to see the specific combinations associated with the undecided states on your electoral map.

For the initial Sabato forecast, with only four states (and one Nebraska district) starting as toss-up, the number of pathways to 270 for each party is very small. Two tie scenarios remain possible. The image below is a composite from the details page associated with the map. 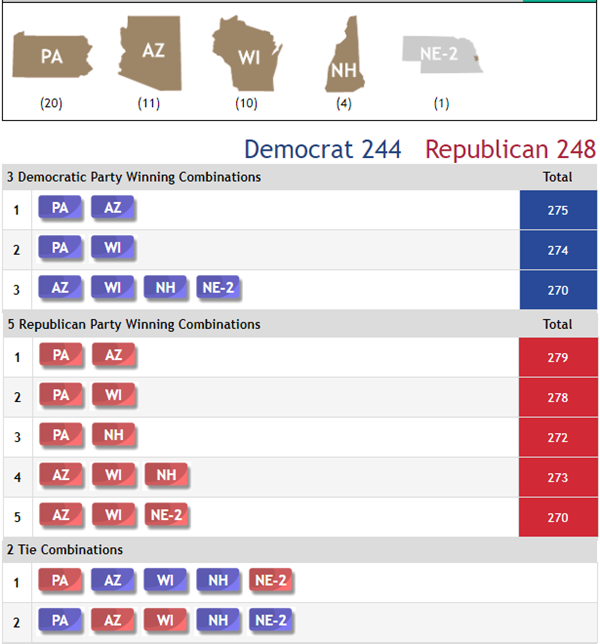 Here are the 2020 consensus ratings for Senate, House and Governor.  At this time, they are based on the initial ratings of three forecasters:  Sabato's Crystal Ball, The Cook Political Report and Inside Elections.  We'll keep this map updated and likely add more projections as they become available.

Click any of the maps for the permanent URL, as well as an interactive version. Note that only races seen as safe by all three forecasters are given the darkest shade of red/blue on the map.  This allows for the broadest look at the competitive landscape.

Senate
34 seats will be contested in 2020, including a special election in Arizona.  22 are held by the GOP, 12 by Democrats. To take control, Democrats will need to gain 3 or 4 seats. House
As is the case every two years, all 435 seats will be up for election in 2020.  Democrats currently hold 235 seats to 197 for the GOP. There are three vacancies; all were previously held by Republicans.  If we assume those will stay in Republican hands*, that party will need to gain 18 seats to regain the control lost in the 2018 midterms. Governor
Kentucky, Louisiana and Mississippi hold gubernatorial elections in 2019, with 11 more states to follow in 2020. Despite the deep-red lean of these states in presidential contests, all three races are seen as competitive, helped by the fact that they are taking place in an off-year.  The country's governorships are roughly split between the two parties, with Republicans holding 27 of the 50. 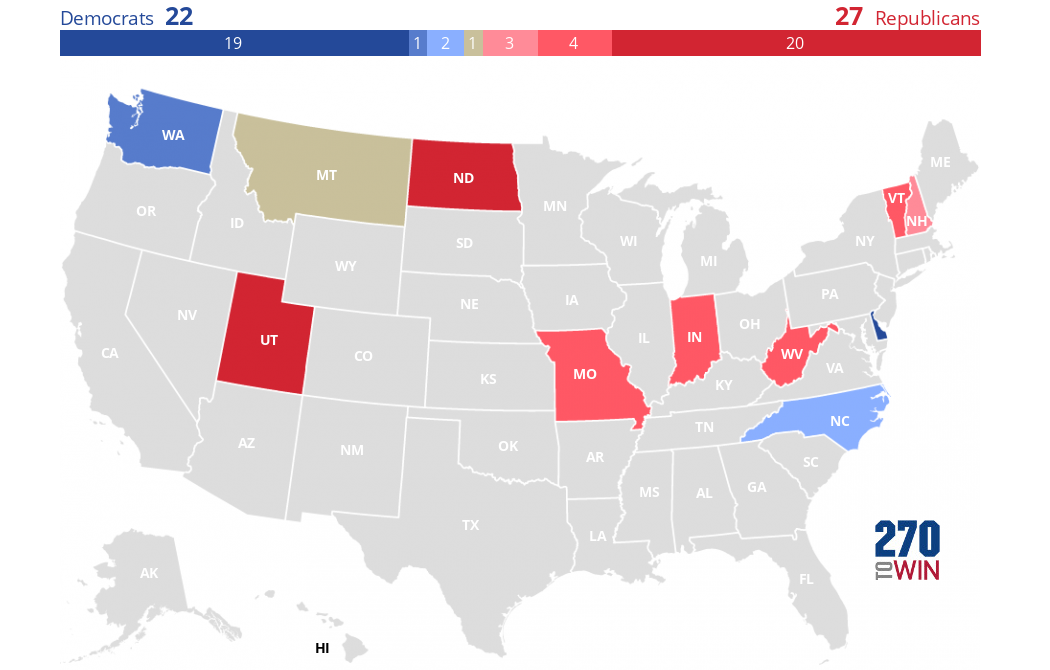