There are two state house special elections and one special primary Tuesday.

There are 105 State House districts in Alabama. The chamber is dominated by Republicans, who hold a 76-26 advantage. There are three vacancies. The state is one of a handful where Representatives are elected for four-year terms; the next regularly scheduled election is in 2022.

The District 78 vacancy was created by the resignation of Democrat Kirk Hatcher after he won a March 2 special election for an open State Senate seat.

The Democratic nominee is Kenyatte Hassell. She won a runoff primary election against Donald Williams on June 22. The Republican nominee is Loretta Grant, who was the only qualifier from her party.

This Montgomery area district is heavily Democratic: Hatcher won with 83% of the vote over an independent in 2018. The last time the GOP fielded a candidate, in 2014, the nominee lost 73% to 27%.

The 400 member New Hampshire House is the largest one in the United States. There are currently 208 Republicans and 186 Democrats, with six vacancies. Five of these open seats were previously held by Republicans. The next regularly scheduled elections are in 2022.

Hillsborough 7 is a multi-member district with 6 representatives. Four of the current incumbents are Republicans, one is Democratic. The seat has been vacant since May 22, when Republican David Danielson died.

There were no primaries, as only one candidate filed from each party. The nominees are Democrat Catherine Rombeau and Republican Linda Camarota. Rombeau was on the ballot last November, finishing outside the top 6. Camarota previously served here - she was elected in 2018 but did not seek reelection in 2020.

UPDATE:  While Rombeau looks to have narrowly won - flipping the seat to the Democrats - it is expected that Camarota is going to file for a recount.

Of the six vacancies, this is the one previously held by a Democrat. The remaining Representative of the two-member District Cheshire 9 is also a Democrat. The vacancy occurred when Douglas Ley died on June 10.

Republicans Lucille Decker and Rita Mattson meet in Tuesday's GOP primary. Mattson was on the ballot this past November, finishing 3rd. The winner will face off against Democrat Andrew Maneval in the October 26 special general election. Maneval does not have any intraparty opposition for the nomination.

We've added a 2022 election calendar to the site.

Texas kicks off the primary season on Tuesday, March 1, with North Carolina up the following week. There's a lull after that until May, when 11 states hold their primaries. June and August are the busiest months.

The calendar includes each state's primary date, as well as the date for runoff elections, for those states that require them when certain thresholds are not met.

There are 433 days until the November 8, 2022 midterm elections; grab a countdown clock here. 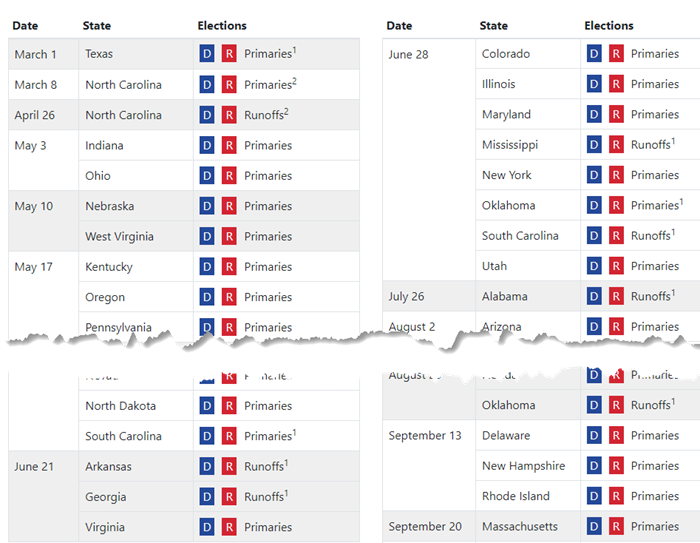 There are 80 seats in the California State Assembly. The body is dominated by Democrats, who control 60 seats. This includes the vacancy that will be filled in Tuesday's special election.

The open District 18 seat is in the Oakland area, entirely within Alameda County. The vacancy was created in April when Democrat Rob Bonta resigned after being confirmed as California Attorney General.

Advancing from the June 29 all-party primary were Democrats Mia Bonta and Janani Ramachandran. Bonta, wife of the former incumbent, received 38% of the vote; Ramachandran saw 24% support.

There are 150 seats in the Texas House of Representatives. Republicans hold an 82 to 66 margin over Democrats. There are two vacancies, including the resignation of Democrat Leo Pacheco (TX-118) on August 19.

Tuesday's special election is to fill the vacancy in District 10, located between Dallas and Waco. The former incumbent, Republican Jake Ellzey, resigned after winning a July 27 special election runoff in the Texas 6th congressional district.

This has been a solidly GOP district over the past decade, with no Democrats challenging for the seat until 2018. Ellzey won in 2020 with about 76% of the vote.

Under Texas special election law, there were no primaries. All eight candidates, including five Republicans, are competing on a single ballot.

Consistent with the lean of the district, two of those Republicans appear to be the frontrunners.  John Wray served three terms as this district's representative before Ellzey; he did not run in 2020. Brian Harrison ran in the 6th congressional district special election; he did not make the runoff.

If no candidate gets a majority of the vote, a runoff will be held on a date to be announced.

St. Petersburg, Florida is the 85th largest city in the United States,1 1City rankings are based on July 1, 2020 Census Bureau population estimates. They are for the city itself, not the associated metropolitan area. with a population of just under 260,000.  Tuesday's all-party mayoral primary will select the two candidates that will meet in the November 2 general election, unless one candidate receives a majority of the vote. In that case, that person is elected mayor.

The current mayor is Democrat Rick Kriseman, who is completing his second four year term. He is unable to run due to term limits. There are eight candidates on the ballot. While officially nonpartisan (NPA label in the results table below), five of the candidates are Democrats, two Republican and one is an independent.

St. Pete Polls has conducted a number of polls on the race for FloridaPolitics.com; the most recent of which was released on August 21. Two months ago, four candidates seemed viable. However, subsequent surveys have seen support gravitate toward two of them.

The poll also surveyed the general election, where Welch had a 53% to 29% edge on Blackmon. If he were to win, Welch would be the first Black mayor in the city's history.

Kathy Hochul Sworn in as Governor of New York 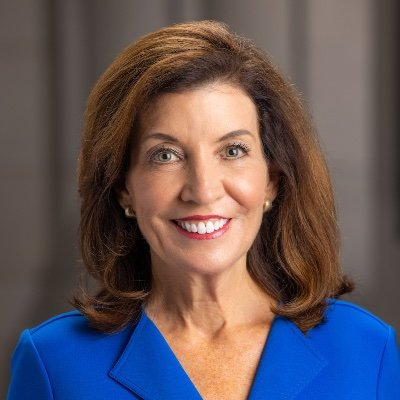 Democrat Kathy Hochul was sworn in as New York's 57th governor shortly after midnight Tuesday. While continuing a legacy dating back to George Clinton in 1777, she has made history by becoming the state's first female governor.

Hochul succeeds Andrew Cuomo who resigned after nearly 11 years in the position. Cuomo had announced his departure two weeks ago, after a report detailing his sexual harassment of multiple women was released by the state attorney general's office.

New York is one of 36 states to hold a gubernatorial election in 2022. Hochul has already stated she plans to seek a full term.

California has published a voter's guide for the September 14 gubernatorial recall election.  It includes arguments from the recall proponents as well as one from Democratic Governor Gavin Newsom. There are also statements from many of the 46 candidates hoping to replace Newsom if he is recalled.

A vote-by-mail ballot will be sent to all active registered voters in California. There will also be in-person early voting.  Polls are open on Election Day from 7:00 AM to 8:00 PM Pacific Time.

There is one 'yes or no' question on the ballot: "Shall GAVIN NEWSOM be recalled (removed) from the office of Governor?"

If a majority (50%+1) of the recall question votes are 'yes', Newsom will be removed from office and replaced with the replacement candidate receiving the highest number of votes.

Most polling has narrowly favored keeping Newsom in office. In terms of a replacement, conservative talk show host Larry Elder has led most surveys, seeing support in the low 20% range. Other notable Republicans in the race include:

The most notable Democrat in the race is YouTube influencer Kevin Paffrath. At the urging of Newsom's campaign, Democrats with political experience largely stayed on the sidelines. This strategy may backfire, opening the door for a Republican governor in one of the nation's bluest states, should Newsom be removed.

Turnout is going to be key. From the New York Times: "The vote is expected to come down to whether Democrats can mobilize enough of the state's enormous base to counteract Republican enthusiasm for Mr. Newsom's ouster."

Regardless of how this turns out, California is one of 36 states with a regular gubernatorial election in 2022. If Newsom is removed and replaced by a Republican, that person will almost certainly be an underdog in the race for a full term. 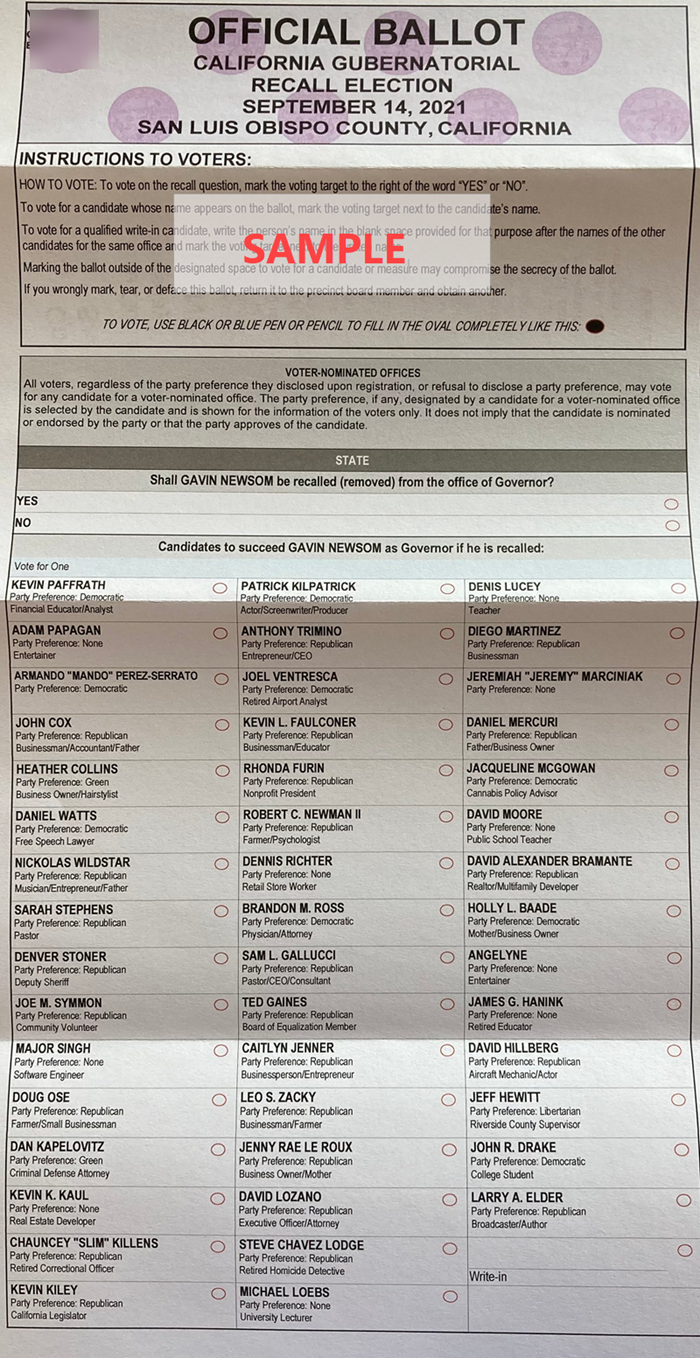 We're following one election this week.

There are 36 seats in the Connecticut Senate. At present, there are 23 Democrats and 12 Republicans. Connecticut is one of 12 states where Senators serve two-year terms; the next regularly scheduled elections are in 2022.

District 36 is located in the southwestern corner of the state. It is a highly affluent area, with median household income of twice the state average. The State Senate seat was vacated on June 22, when Democrat Alex Kasser resigned for personal reasons.

The major party nominees on the ballot are Alexis Gevanter (D) and Ryan Fazio (R). Fazio was the GOP nominee in 2020, losing to Kasser by 51% to 49%. Also on the ballot is independent John Blankley.

The district has trended a bit more Democratic over the past decade, culminating with Kasser's victory1 1In 2018, she was known as Alex Bergstein. over five-term incumbent Republican L. Scott Frantz in 2018. She became the first Democrat to win the seat since 1930.

With this influential district split politically, both parties are campaigning aggressively to win the seat. A Democratic hold would give the party a 2/3 supermajority in the Senate, although they are a bit short of that in the State House where the partisan composition is 97-54.

Democratic Rep. Ron Kind, the senior member of the Wisconsin congressional delegation, won't seek reelection next year. Kind narrowly won a 13th term in 2020, beating Republican Derrick Van Orden by less than 3%.  This represented quite a shift:  Kind had won by 20% in 2018, and actually ran unopposed in 2016.

The Wisconsin 3rd district was one of just seven nationally that voted for Donald Trump in 2020, while electing a Democratic representative.  Trump won here by about 5%.

Absent the incumbent and with Van Orden running again, the district becomes an even stronger pick-up opportunity for the GOP next year.

Kind's district covers the southwestern part of the state, bordering Minnesota, Iowa and a small portion of Illinois. These boundaries may change in the upcoming redistricting, although a significant shift is not anticipated. 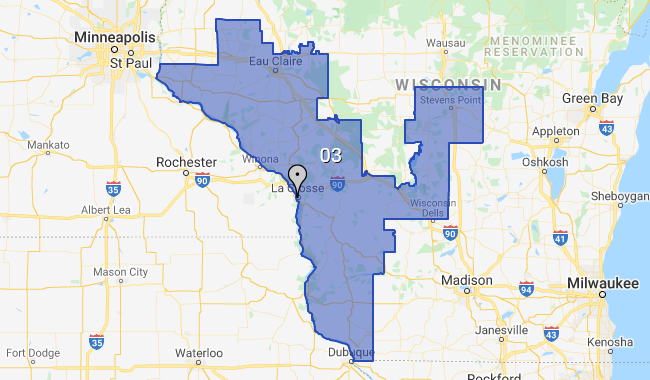 16 current members of the House - 8 from each party - have announced they are retiring or running for another office in 2022.

Days after a report detailing his sexual harassment of eleven women was released, Democratic Gov. Andrew Cuomo announced his resignation as governor of New York Wednesday. The resignation will be effective in 14 days.

Cuomo's discussion about his pending departure begins at about 12:00 in the video from an address he made late Wednesday morning.

Lt. Gov. Kathy Hochul, also a Democrat will become the 57th - and first female - governor of the state when she takes over.

I agree with Governor Cuomo's decision to step down. It is the right thing to do and in the best interest of New Yorkers.

As someone who has served at all levels of government and is next in the line of succession, I am prepared to lead as New York State’s 57th Governor.

If Cuomo had not resigned, he faced the prospect of removal from office by the state legislature.

New York is one of 36 states with a gubernatorial election in 2022. Cuomo had previously announced he would run for a fourth term. As a result, no Democrats have yet joined the race. On the GOP side, Rep. Lee Zeldin (NY-1), 2014 GOP gubernatorial nominee Rob Astorino, and Andrew Giuliani announced their candidacies earlier this year, hoping that a Cuomo weakened by multiple scandals would create an opening for a Republican despite the deep blue lean of the state.  The last Republican governor of the state was George Pataki, who served three terms after defeating Cuomo's father, Mario, in the 1994 election.

The general election race is seen as a toss-up, as incumbent GOP Sen. Pat Toomey is not seeking a 3rd term. It will be a key race in determining who controls the Senate, currently split at 50-50, after the 2022 midterms.

Lamb is the 15th current House member to announce they are retiring or seeking another office in 2022.