Jeb Bush and Scott Walker are virtually tied in a new South Carolina poll from Public Policy Polling. These candidates garnered just under 20% support. Ben Carson, Lindsey Graham and Mike Huckabee also had double-digit support. Interestingly, the poll showed that over 60% of voters (regardless of party) didn't want home state Senator Graham to run for president. 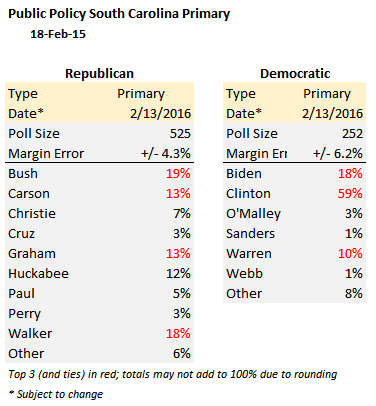 Public Policy also surveyed a number of prospective South Carolina general election match-ups. Not surprisingly, the Republican leads in all of these heats. South Carolina has not voted Democratic in a presidential election since 1976.