The polls are open until 8PM* in the five Northeastern and Mid-Atlantic states holding their primaries today. It looks to be a good day for frontrunners Donald Trump and Hillary Clinton. Let's take a look at what that might mean for the delegate counts. Keep in mind these are rough projections; there's not much to go on at the congressional district level where a decent chunk of the delegates will be awarded.

Republican: The image below is from our interactive delegate calculator, where you can create your own forecast of whether Trump will reach the necessary 1,237 delegates before the Republican Convention.

Trump starts the day with 845 delegates, with 118 at stake across the five states. If the polling is even remotely accurate, there's little doubt that Trump will win all five states, likely exceeding 50% in at least a couple of them. Each state has a somewhat different allocation methodology, leading to a variety of delegate outcomes. For details on each state's approach and more polling detail, see our Republican primary preview.

Recent polling has been even more favorable for Trump. Based on that, we expect him to win in the neighborhood of 100 delegates today. This will put him within about 300 of winning the nomination. There are 54 technically unbound Pennsylvania delegates that will be directly elected by the voters today (3 in each congressional district). It is expected that a decent portion of them will support the state or respective congressional district winner. Additionally, next week's Indiana primary, awards 57 delegates on a split winner take all basis. The disposition of these 111 delegates will go a long way toward determining how likely it is that Trump reach 1,237 by the end of the primary season.

Democrat:  Clinton is likely to win all five states today, although one recent poll in Rhode Island showed Bernie Sanders slightly ahead. Democratic delegate allocation is essentially the same in each state: Some proportional by statewide vote, others at the congressional district level. There are also a number of unbound superdelegates in each state. The table below shows the breakdown of pledged delegates in each state voting today. 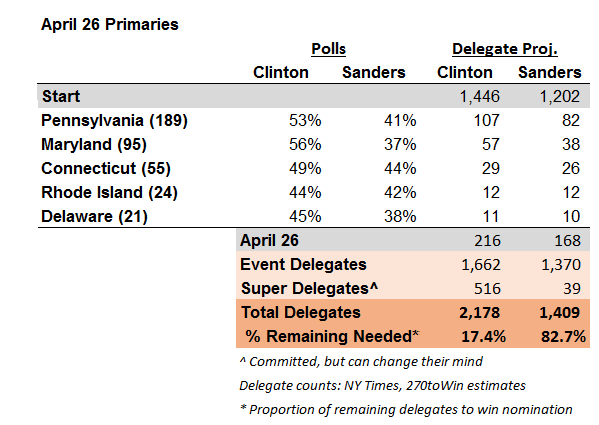 Clinton is projected to grow her lead by about 50 pledged delegates today. More importantly, it takes another 384 delegates off the table. When factoring in committed superdelegates, she will likely need fewer than 20% of those remaining to win the nomination. As we noted in our Democratic primary preview, Clinton is likely to reach the magic number of 2,383 on June 7.

* This information is believed to be accurate, but do not rely on it in deciding when to vote