Pennsylvania will send 71 delegates to the Republican Convention this July, making it the seventh most delegate-rich state in the party's nominating process. The state stands alone, however, in the number of those delegates that will arrive in Cleveland unbound to any particular presidential candidate. While limiting the voice of the party faithful in the April 26 primary, the closeness of the race puts the state's delegates in a strong position to determine the ultimate Republican nominee.

Almost all 2,472 delegates to the Republican Convention will be pledged to a specific candidate, at least on the first ballot. However, 54 of the Keystone State's 71 delegates will be unbound. (The remaining 17 will be pledged to the winner of the statewide vote). These 54 will be elected directly by voters, three in each of 18 congressional districts. According to the Pittsburgh Tribune-Review, there are 162 candidates for these 54 slots. Their names will appear on "ballots identifying the delegate candidates by name, but not the presidential contender they support."

While officially unbound, there is nothing to prevent candidates from indicating who they would support. To that end, the newspaper reached out to all 162 candidates to ask them. They received 110 responses, which are summarized in the graphic below. Click it for specific details. 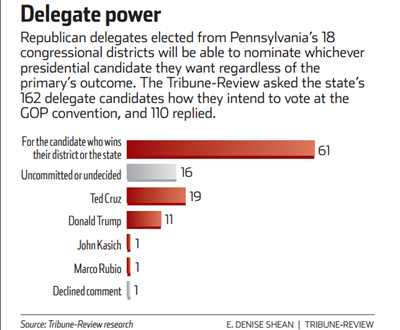 The results indicate Democracy may still be at work, even with this convoluted process, as 61 of the 110 respondents said they would vote for the candidate that wins their district or the state. While that leaves some wiggle room, many Republican delegates nationwide are bound based on similar results. Of course, there may also be some positioning here as these people try to get elected. For example, if one was running in a District with demographics favorable to Trump, he or she might be better served to get out in front with a specific answer, instead of a more generic one.