Hillary Clinton has opened up an average lead of almost 8% in national polling. She's led each such poll since the Democratic convention, leveraging a bounce from that event with Donald Trump's bad week to build a fairly sizeable lead.

Several battleground state polls have been released this week, and they are largely showing the same. A Suffolk poll out today gives Clinton a 6 point lead in Florida, while Franklin & Marshall finds her with an 11 point lead in Pennsylvania. In New Hampshire, Clinton leads by 17 and she's even slightly ahead in traditionally deep-red Arizona.

The Florida finding was particularly interesting, as the same pollster found Senator Marco Rubio with a double-digit lead over either of his likely challengers. (The Florida Senate primary is August 30).

There was some good news for Trump. He led by four in North Carolina and has maintained double-digit leads in deep red Kentucky and Tennessee.

You can find all the most recent polls here. We calculate the current polling averages here and also link to each state's polling detail.

The polling averages help us create the Electoral Map Based on Polls. Almost every state* has now been polled in 2016. Here's how the map currently looks: 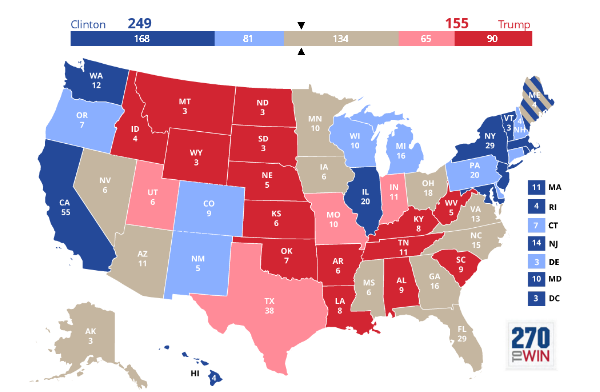 Click or tap the image above to see the interactive version of the polling map which you can use to create and share your own 2016 presidential election forecast.
* Fewer than 10 states (+DC) have not been polled in 2016; these are all safe red or blue states and are reflected as such on the map. See the bottom of the polling average page for the specific states.
comments powered by Disqus