Four Republican and three Democratic contests are being held on this 'Super Saturday'. We'll update this page with results. Click a state name for full details

Kansas (Caucus, 40 delegates): Cruz Wins Ted Cruz was victorious here, getting roughly half the vote. Donald Trump looks to be 2nd, followed by Marco Rubio and John Kasich. The delegate allocation is proportional here (by state and District), with a 10% threshold. At this point, Kasich is just above 10%, so it looks like all 4 candidates will earn delegates here. By winning Kansas, Cruz continues to build northward in the south central US --- he previously won Texas and Oklahoma.

From the New York Times, this looks like the final delegate allocation: 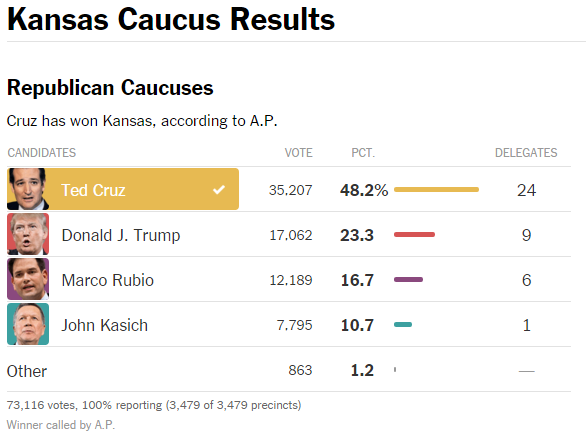 Louisiana (Primary, 46): Trump wins Voting closes at 9PM ET; Trump is well ahead in polling. Delegate allocation is proportional, with some statewide and some by Congressional District

Note that Democratic delegate allocation is proportional in each state; with a 15% minimum to get any delegates.

Louisiana (Primary, 59): Clinton wins No delegate info yet; one poll out recently kept Sanders below the 15% threshold to receive any delegates