Republicans will caucus in Nevada tomorrow, then debate in Houston this Thursday. After that it's on to Super Tuesday, March 1. This will be the busiest date of the Republican nominating calendar. Here's a very quick update on the polling in each state. Note that most delegates on this date will be allocated proportionately, either based on the statewide result, or some combination of statewide and each Congressional District. There is also usually a minimum threshold to claim any delegates. Click/tap a state for more details. We'll do a Democratic update tomorrow. 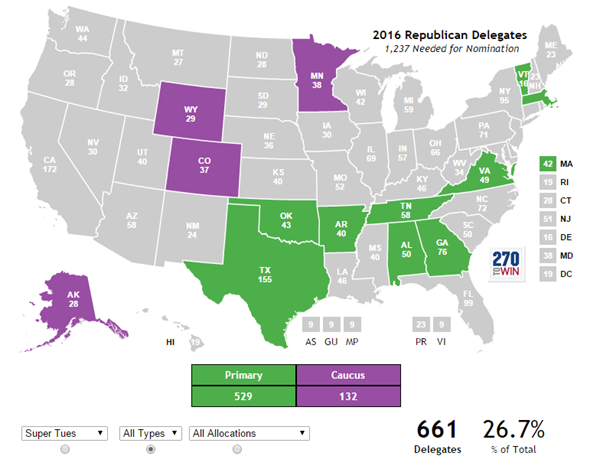 Correction: An earlier version of this post included North Dakota as a Super Tuesday caucus state. That appears to be better classified as a caucus (state convention) the weekend of April 1-3. We've moved it to April 1 on our 2016 election calendar. Regardless of date, none of the state's 28 delegates will be bound to a particular candidate at the Republican National Convention.

Alabama (Primary, 50 delegates): A mid-February poll had Trump at 38%, Cruz and Rubio in the mid-teens (Likely Trump)

Georgia (Primary, 76): It's been about a month since two polls that had Trump up by 10 points over Cruz (Leans Trump)

Massachusetts (Primary, 42): A poll out today had Trump at 50% (Looks pretty solid for Trump)

Tennessee (Primary, 58): No recent polling (Based on nearby state polling, would say Likely Trump)

Vermont (Primary, 16): A poll out today (very small sample size) had Trump well ahead of Rubio and Kasich (Leans Trump)

Wyoming (Caucus, 29): No polling; delegates won't be known until a later date