UPDATE: Shortly after this article was published, the New York State Court of Appeals ruled that the congressional map must be redrawn. It also tossed the State Senate map and noted that the primary for these offices will likely need to move to August.

On Tuesday, the New York State Court of Appeals - the state's highest court - held a hearing on the state's previously-enacted congressional map. The map, which strongly favored Democrats, had been ruled unconstitutional by two lower courts earlier this month. A ruling is expected quickly. The state's primary is scheduled for June 28. (Full primary calendar >>)

On Monday, a Kansas court invalidated that state's congressional map. The decision will be appealed to the State Supreme Court. The primary is August 2.

These district shapes were removed from the 2022 House Interactive map. Two other states, Missouri (August 2 primary) and New Hampshire (September 13) have not yet completed redistricting.

There has been little movement in Missouri, where the two legislative branches - both controlled by Republicans - have been unable to agree on a map. Lawsuits have been filed about the lack of a map in both state and federal court.

In New Hampshire, a proposed map was introduced this week by GOP legislators after Gov. Chris Sununu (R) said he would veto the prior map sent to his desk. From a partisan perspective, the new map is little changed from the old one. It would make District 1 more favorable for a GOP pick-up, while making it more likely Democrats hold District 2. In a statement, Sununu gave the new map a thumbs down; he favors two competitive districts in keeping with the 'purple' lean of the state.

Last Friday, Florida Gov. Ron DeSantis (R) signed into law the state's new congressional map. Litigation is underway regarding the map, which strongly favors Republicans. Initial ratings for the state's 28 districts have been added to the 2022 Consensus map.

40 districts, across the four states discussed above, remain incomplete. 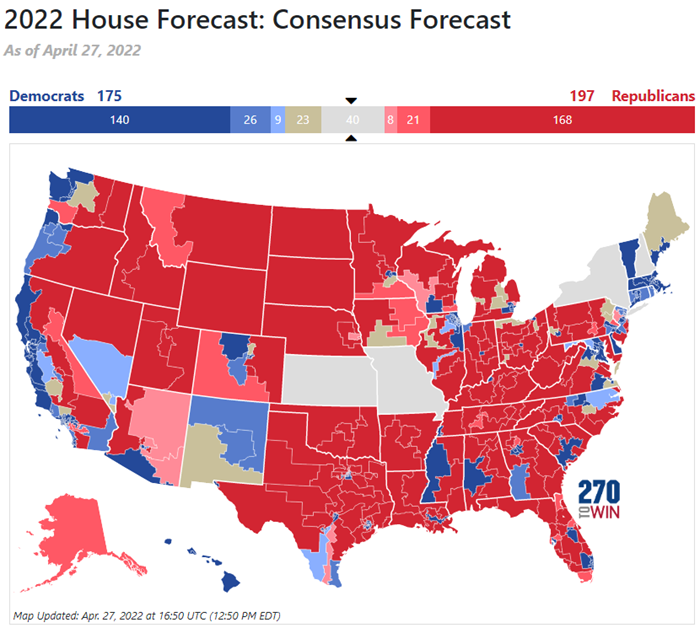