The Road to 270: Massachusetts 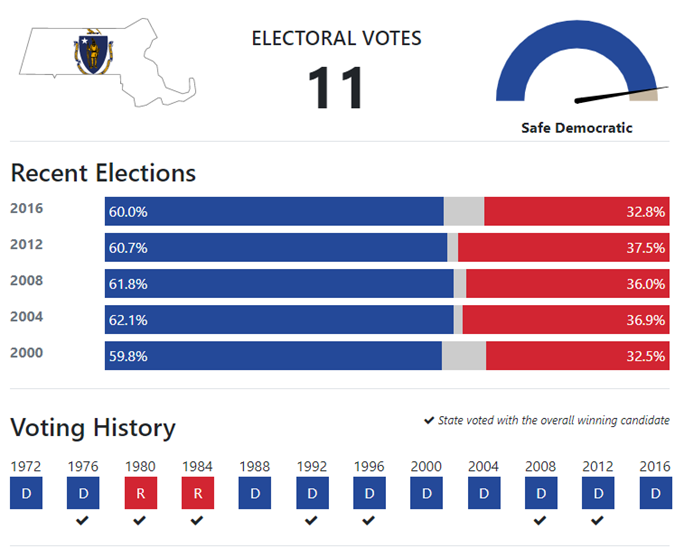 Massachusetts has raised some of our most famous and powerful political figures. John Adams, Daniel Webster, Calvin Coolidge, John F. Kennedy and George H.W. Bush - to name just a few - all have roots in this small, New England commonwealth. In recent presidential elections Massachusetts has been one of the most Democratic states in the nation. It was the only one to vote for Democrat George McGovern in the Republican landslide of 1972.

It wasn’t always this way. In fact, Massachusetts wouldn’t vote for the Democratic Party until 1912, nearly a century after the party’s creation. Looking back at the state’s history helps to explain its flip from reliably Republican to staunchly Democratic.

The Pilgrims aboard the Mayflower arrived in present-day Massachusetts in 1620 and established the Plymouth Colony. The colony was followed by the larger Massachusetts Bay Colony that, unlike Plymouth Colony, had an official royal charter from England permitting the venture. Many of the newcomers relied on the ocean for a living and worked as fisherman, traders, and shipbuilders. This sea-based economy would eventually lead to the growth and success of the Boston harbor and the city itself.

Over a half-century later after their arrival, Great Britain unified the colonies in Plymouth, Massachusetts Bay, Nantucket, and Martha’s Vineyard into the new Massachusetts Colony. As before, the crown continued to overlook and ignore the colony and new towns, people, cultures, economies, and political institutions took root. Antipathy to imperial taxes and restrictions fermented unrest that led to clashes including the Boston Massacre, the Boston Tea Party, and eventually the Revolutionary War.

In 1788, fourteen years after the Battles of Lexington and Concord kicked off the war, Massachusetts would become the sixth state to ratify the U.S. Constitution.

From the time the Constitution officially took effect in 1789 through the election of 1820, Massachusetts was a Federalist state. The war had pushed farmers and fishermen into manufacturing and the textile, coal, steel, and railroad industries became the new dominant sectors. The ensuing wars between Britain and France also gave American traders access to more markets than their European competitors. This led to a new merchant class in Massachusetts, further boosted the country's manufacturing industry, and helped spark the American Industrial Revolution.

Given that the Federalist Party advocated for a strong federal government to champion manufacturing and commercial interests, it’s unsurprising that the party dominated here during these early decades. The party’s nominee won five of the first six partisan presidential elections1 1This does not include the non-partisan elections of George Washington in 1789 and 1792. through 1816.

Even after the Federalist Party’s collapse, Massachusetts continued to vote for the candidates popular in New England who aligned with their positions on Federal power, trade, and slavery. As the country polarized around slavery, Massachusetts voted consistently against the pro-slavery Democratic Party. From the party’s inception in 1828 through the Civil War, Massachusetts did not once vote for the party’s nominee.

This anti-Democratic Party sentiment continued through the early 20th Century. Massachusetts voted for the Republican Party in each of the 18 presidential elections from 1856 to 1924 with the exception of 1912, when Theodore Roosevelt split the Republican vote, allowing Woodrow Wilson to win a plurality.

The population was not, however, completely unified behind the Republican Party. The state had a sizable Irish Catholic constituency which had arrived during the Irish Potato Famine and the American Industrial Revolution. Other immigrant groups including Italians and Jews also arrived and settled in Boston throughout the 19th Century. The new immigrants often faced discrimination from Protestants. A political divide formed with immigrant and Catholics voting Democratic and New England Protestants voting Republican. During the early to mid 1900s, Catholics in Boston and Massachusetts stayed put as other demographic groups moved west and south for new opportunities and jobs. The state’s Irish Catholic population continued to grow and hold political sway.

The Republican dominance ended abruptly and permanently in 1928. That year, Democrats nominated Al Smith, an Irish Catholic, who boosted Democratic turnout in heavily immigrant urban communities including Boston. Republican Herbert Hoover won in a landslide, winning all but eight states and losing only two — Massachusetts and Rhode Island — outside of the South.

Since then, Democrats have regularly won Massachusetts in presidential elections. The state voted for Franklin Roosevelt by relatively slim margins in each of his four elections, indicating that the state was still competitive. In 1952 and 1956, the moderate Republican Dwight Eisenhower ran on his strength in international affairs and brought Massachusetts back into the Republican fold.

The 1960 election marked a turning point for Massachusetts Democrats. Their party's nominee, John F. Kennedy, was homegrown and beloved in the state. A man born into the political aristocracy, a Massachusetts Senator, and a man of Irish Catholic descent, Kennedy routed Republican Richard Nixon here. While Kennedy edged Nixon out by just 0.17% in the national popular vote, he won Massachusetts by over 20%. Kennedy’s presidency and popularity, along with the liberal advocacy of the state’s prestigious universities, helped push Massachusetts towards Democrats.

Democratic Dominance Through the Century

Since Kennedy, Massachusetts has voted to the left of the country in every presidential election. It was the only state in the country to vote for the liberal Democrat George McGovern over Republican Richard Nixon in 1972 and it did so by a 9% margin. The only Republican to win the state after Eisenhower in 1956 would be Ronald Regan (himself of Irish Catholic descent) in 1980 and 1984, albeit by much smaller margins than he won nationally. Following Reagan’s reelection victory, Democrats have safely carried the state year after year.

In the mid-19th Century, Boston began its transition from a manufacturing and transportation-based economy, a process that started with unemployment and deindustrialization. Then, in the 1980’s, the state entered the period known as the “Massachusetts Miracle”. During this time the city’s technology, financial, and health care industries grew, largely due to the top-notch college and universities in the Boston area. The Miracle came to a halt in 1989 and the state entered a recession. The financial troubles would push voters to elect a string of fiscally conservative, socially liberal, Republican governors starting with William (Bill) Weld in 1990. The most famous of these governors is Mitt Romney who served from 2003 to 2007. Romney would go on to be the GOP presidential nominee in 2012 and is now a U.S. Senator from Utah. 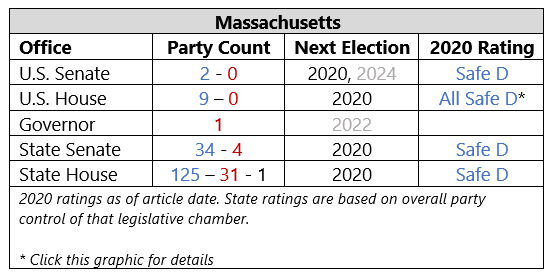 This Republican success did not extend to the top of the ticket. Starting in 1992, every Democratic presidential nominee won Massachusetts by double digits and no Republican nominee has won a single county in the state. In 2004, Massachusetts Senator, John Kerry, won the Democratic nomination and easily won his home state with a 25% margin even as he lost the national popular vote by 3%.

While the top-line presidential margins have floated in the mid-twenties since 2000, the dynamics within the state have seen some change. Suffolk County — which encompasses the core of Boston — shifted from a Democratic margin of 51% in 2000 to a 62% margin in 2016. Surprisingly, the state’s western, rural, sparsely populated counties also drifted towards Democrats between 2000 and 2016. Meanwhile, Plymouth and Bristol Counties on the state’s southeastern border shifted decisively, 26% and 9%, towards the Republican Party.

Comparing 2012 to 2016, however, Massachusetts counties follow the trends of the rest of the nation. The state’s easternmost rural counties shifted heavily towards Donald Trump while the urban and suburban counties in the Boston-Cambridge-Newton Metropolitan Area moved decisively towards Hillary Clinton. Additionally, 4% of Massachusetts voters cast their ballot for the Libertarian ticket which featured former-Massachusetts governor Bill Weld as the Vice President.

While Massachusetts has proven willing to vote for vote for Republican gubernatorial candidates, on the presidential level it is safely Democratic. The state’s real presidential contest will take place next week in the Democratic Primary. Massachusetts will vote on Super Tuesday, March 3, along with 13 other states on a day that may go a long way toward choosing the Democratic presidential nominee. Polling has been sparse here, but Massachusetts Sen. Elizabeth Warren appears to be in a tight battle with Vermont Sen. Bernie Sanders for top spot. Warren led earlier polling, but Sanders seems to have eliminated that gap with his strong showing in the early voting states.