The Road to 270: California 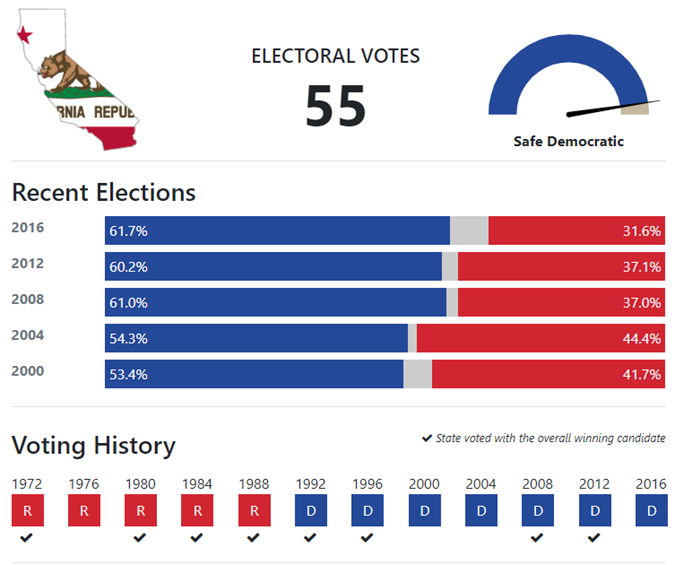 In the 2018 midterms, Democrats netted 41 House seats and took control of the House of Representatives. They did so in large part by flipping suburban districts across the country that were once safely Republican. No place better illustrates this political realignment than Orange County, California. This county was once a breeding ground for Republicans including Richard Nixon and Ronald Reagan. In 2018, Democrats flipped four congressional districts in Orange County. The county that Reagan called the place “where the good Republicans go to die” became ground zero for the 2018 blue wave. Democrats now hold 45 seats in the California House delegation and Republicans hold six.1 1There are two vacancies. Prior to that, Democrats held a 46-7 edge.

California, however, wasn’t always the Democratic stronghold it is today. From 1952 to 1988 it only voted for one Democratic presidential nominee. Recently, though, demographic changes like those that overwhelmed Republicans in Orange County have pushed California ever deeper into Democratic territory.

Las Californias to the Gold Rush

In 1848, two events changed the course of California history. First, Mexico ceded territory, which included Alta California, to the United States following the Mexican-American War. Second, gold was discovered at Sutter’s Mill. The population exploded — not only with miners hoping to strike it rich, but also entrepreneurs catering to the needs of the new immigrants. The people selling tools, clothing, food, and other supplies were the real money-makers of the time. Perhaps the most famous of these entrepreneurs was Levi Strauss, who added metal rivets to pants and founded the top selling jeans brand in the world.

Statehood and the California Dream

Immigration to California continued through the 1800s as promises of economic success and the California Dream pulled in newcomers. The construction of the Transcontinental Railroad that connected Omaha to San Francisco brought in laborers, most of whom were Chinese immigrants. A similar need for agricultural labor attracted workers, largely of Native American, Asian, and Mexican ethnicity and descent.

In the early 20th Century, aqueducts to the dry southern region of the state allowed the development of Los Angeles and San Diego. The state’s industrial farms and oil fields had an endless thirst for labor and so the population continued to boom. The state was also a destination for devastated farmers escaping the Dust Bowl in the 1930s. By 1940, California’s population had reached nearly seven million; at the time of statehood in 1850, it was less than 100,000.

Even so, the biggest boom was yet to come. World War II demanded more defense and agricultural production than ever before. California’s labor force made it a natural home for these industries that required difficult work. During the war, California received 10% of U.S. defense spending and accounted for 14% of total American production. From 1940 to 1945, California’s population grew by 30%, about 2.5 million people. After the war, the population continued to climb; people who had moved to the state during the war liked living there. The state’s natural beauty and pleasant climate prevented a post-war exodus. The state also became a primary entry point and destination for immigrants as the growing defense, manufacturing, automobile, film, and technological industries demanded more labor.

From 1940 to 1970, California’s population grew from seven million to 20 million, eventually overtaking New York as the most populous state. After the war, the state developed its housing, freeways, roads, schools, bridges, and transportation infrastructure to accommodate the population influx. The economic and population boom lasted through most of the 20th Century. During the 1980s, the military and defense industries continued to grow. So too did Silicon Valley, the Northern California tech hub that had originated in the region due to a confluence of an established defense industry ecosystem, Stanford University, and venture capital.

In the 1990s, California’s cycle of growth and prosperity stopped. Drought, fires, earthquakes, mudslides, and other environmental disasters plagued the state. In 1991, according to Republican Governor Pete Wilson, California’s financial situation had deteriorated from a “crisis” to an “emergency”. He blamed the Gulf War, recession, and environmental disasters for the state’s ballooning deficit and precarious finances. The state’s response was to hike taxes and government spending. Between 1990 and 2008, the state’s budget grew from $51 billion to $96 billion.

The Great Recession only exacerbated the state’s financial troubles. Californians who had bought suburban homes outside Los Angeles and San Francisco found themselves deeply in debt. Cities including San Bernardino and Stockton filed for bankruptcy, largely due to generous public employment benefits that had been negotiated by powerful unions.

Despite the troubles, California has the most powerful economy of any state. If it were its own country, it would be the fifth largest economy in the world. The state has pockets of extreme wealth and extreme poverty. Republicans point to California’s homelessness, crime, and crumbling infrastructure as a result of Democratic leadership and government regulations. But the state’s booming metropolises and pristine environment are also used as arguments in favor of government regulation and environmentalism.

From 1860 through 1928, California voted according to the regional lines drawn by slavery and the Civil War. The state was reliably Republican on the presidential level with exceptions in 1880, 1892, 1912, and 1916. During this era, Californians were also willing to vote for progressive outsiders. In 1912, when Theodore Roosevelt broke from the Republican Party and ran under as a third-party contender, 42% of Californians voted for him. This was Roosevelt’s second best showing of any state. Again in 1924, 33% of Californians voted for the Progressive Party’s candidate, Robert La Follette, while his national average was 17%.

In each election from 1932 to 1944, California voted decisively for Democrat Franklin D. Roosevelt and did so by a larger margin the national average. The New Deal was popular in California and helped boost the Depression-ravaged, agriculture-based economy. From 1933 to 1939, the New Deal allocated California the second most money in total and the tenth most per capita of all the states. The New Deal also strengthened California’s unions, an important support system that would help Democrats organize and win future elections. Roosevelt’s popularity in California helped his Democratic successor, Harry Truman, eke out a 0.44% victory over Republican Thomas Dewey in 1948.

After this stretch of Democratic victories, Republicans would again take hold of California for the next four decades. From 1952 through 1988, only one Democrat — Lyndon Johnson in the landslide of 1964 — would be able to win California’s electoral votes. In 1952 and 1956, the moderate Republican, Dwight D. Eisenhower, who ran largely on his experience with international affairs, carried the state. In 1960, 1968, 1972, 1980, and 1984, California’s very own Richard Nixon and Ronald Reagan would lead the Republican ticket and carry California. In 1988, however, the state’s leftward migration became clear when Republican George H.W. Bush won California by less than 4%.

Two demographic shifts are responsible for the Democratic ascendancy in California that began in the 1980s and continues to this day. First, as the state’s economy struggled in the 1990s, blue collar and uneducated whites moved out of the state while college educated whites moved in. This new population was more aligned with the Democratic Party’s positions on social issues like same sex marriage and abortion.

The other demographic change is the growth in the Hispanic and Asian populations. These demographics — generally friendly to the Democratic Party — have been growing in California since the 1970s. In 1994, when Republican Governor Pete Wilson ran a campaign supporting Proposition 187 that denied public services to illegal immigrants, California shifted decisively to Democrats. The hardline stance against immigrants was a death knell for California Republicans on the presidential level. Democrats would strap Republicans to Governor Wilson’s unpopular stance on immigrants and solidify their support among Hispanics and Asians.

Barack Obama’s 24% margin over John McCain in 2008 was the largest Democratic victory since FDR’s landslide in 1936. Obama again dominated the state in 2012 with a 23% margin over Mitt Romney. Then, in 2016, Hillary Clinton expanded that margin even further to 30%.

Hillary Clinton received about 900,000 more votes than Barack Obama did in 2012 and Donald Trump received about 350,000 fewer than Mitt Romney. Clinton outperformed Obama’s margin in most of the state’s populous and dense counties including Los Angeles, San Diego, San Francisco, and Sacramento Counties. Trump, meanwhile, outperformed Mitt Romney in some more rural counties in northern and inland California. The overall shift, however, clearly favored Clinton.

Clinton’s strong performance in California boosted her national popular vote total but had no effect on the Electoral College. Even though she expanded Obama’s margin in California by over 1 million, she received no additional electoral votes. Across the country, Clinton widened the Democratic margin in deep blue states like California and New York while losing narrowly in the swing states of Pennsylvania, Michigan, and Wisconsin. This led to a popular vote victory but an Electoral College loss.

While Californians exodus from the GOP did not impact the Electoral College, it does have downballot effects. In the 2018 midterms, Republicans lost seven House seats in California including four — the 39th, 45th, 48th, and 49th districts — based in Orange County. That county, once a Republican stronghold, exemplifies the national trend of educated, suburban white voters realigning behind the Democratic Party.

California’s 55 electoral votes are safely Democratic. Registered Democrats currently outnumber Republicans 44% to 24%, while No Party Preference voters are at 27%.

California is 39% Hispanic/Latino, a population that makes up the plurality of the state. Asians, and Blacks make up 16%, and 7% of the population respectively. Only 37% of Californians are non-Hispanic whites and the key Republican constituency, non-college educated whites, only make up 27% of the state.

While California used to be politically divided between north and south, the current splits are urban vs. rural and coastal vs. inland.  As with much of the rest of the country, California’s urban communities vote Democratic and its rural regions lean Republican. California has plenty of liberal cities in the Bay area and Southern California that overpower the conservative, rural regions. Communities on the coast are generally wealthier, more educated, and environmentally-focused whereas inland California is less wealthy, more agrarian, and less college educated.

While California may be uncompetitive in the general presidential election, it is an important date on this year’s Democratic presidential primary calendar. The state moved its primary from June to March, increasing its influence in the early stages of the primary process. California Democrats are allocated 415 pledged delegates in the primary, meaning that the state could tip the primary results and narrative coming out of Super Tuesday. While the state’s in-person voters will cast their ballots on Super Tuesday, absentee and mail-in voters have already received their ballots.2 2That said, the state is quite methodical in counting ballots; final results will likely not be known for several weeks after Super Tuesday.

The real presidential competition in California will happen in March when California Democrats make their preference for a nominee known. Demographic trends have pushed the state deeper than ever into the Democrats’ corner, making it a safe state for whichever candidate ultimately wins the nomination.

Looking past 2020, Democratic domination in presidential elections isn't likely to change. However, slower population growth in the past decade means the state may lose a congressional seat - and an electoral vote - after the 2020 Census. If this happens, it will be the first time the Golden State has ever lost representation after a Census.