Highlights from last night's five state primaries and runoff elections in two states. Click a state name for all results.

14th District (Democratic Primary): Ten-term incumbent Rep. Joe Crowley was ousted by political novice Alexandria Ocasio-Cortez. At 28, she will become the youngest woman ever elected to Congress if, as expected, she wins in this heavily Democratic district in November. Crowley is one of the most prominent members of the Democratic caucus and had been in the narrative to become Speaker of the House should the Democrats take back that body in November. 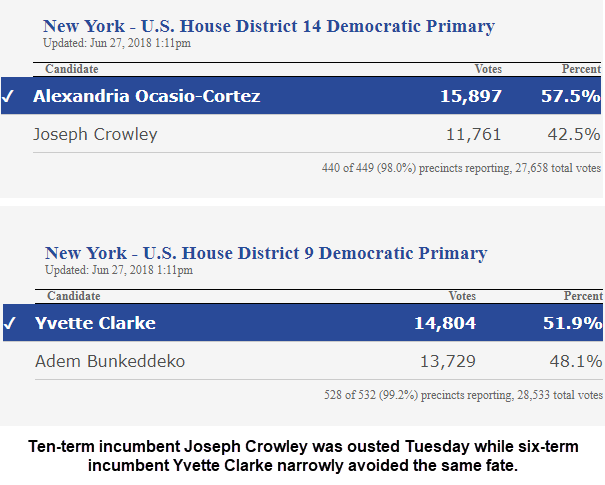 11th District (Republican): Rep. Dan Donovan easily fended off former Rep. Michael Grimm, who wanted his old seat back. This is expected to be a competitive district in the fall; The win by the more moderate Donovan will make it slightly easier for Republicans in this competitive district, the only GOP-held one in New York City. (Donovan will face yet another political newcomer, former U.S. Army combat veteran Max Rose, who won the Democratic primary).

25th District (Democratic): Assembly Majority Leader Joseph Morelle got past several opponents for this safely Democratic seat that became vacant upon the death of Rep. Louise Slaughter earlier this year.

Governor:  New York has a split calendar; the primary for statewide offices will be September 13th.

6th District (Democratic): Businessman David Trone won the primary for this seat being vacated by Rep. John Delaney, who is running for president in 2020. This seat is fairly safe for the Democrats, so Trone will likely be a member of Congress in 2019.

4th District (Republican): William Timmons won the runoff for this deep red seat being vacated by the retiring Rep. Trey Gowdy. He will be a strong favorite to win in the general election.

3rd District (Republican): Michael Guest won the runoff for this deep red seat being vacated by the retiring Rep. Gregg Harper. He will be a heavy favorite to win in November.

1st District (Republican): This seat was vacated when Rep. Jim Bridenstine was confirmed to head NASA. Per state law, the winner of the general election in November will be appointed to serve the final couple months of Bridenstine's term. The runoff between Tim Harris and Kevin Hern on August 28th will likely determine the next member of Congress in this deep red district.

Senator (Republican): As expected, Mitt Romney easily won the nomination and will be a prohibitive favorite in the November election. Sen. Orrin Hatch is retiring.