Updates on the last few states to complete redistricting.

Missouri (8 districts): On Wednesday, Gov. Mike Parson (R) signed Missouri's new congressional map into law. The process had been bottlenecked in the Legislature for months, as the GOP-controlled Senate and House could not agree on a proposal. In the end, the new map isn't all that different than the one in place over the last decade. Republicans are expected to maintain a 6-2 edge in the delegation. The new shapes have been added to the 2022 House Interactive Map.

Kansas (4): On Wednesday, the State Supreme Court upheld the redistricting plan passed by the Legislature in January. Democratic Gov. Laura Kelly's veto was overridden in February, setting the stage for litigation. The new map redistricts part of Kansas City out of District 3, endangering the reelection prospects Sharice Davids, the lone Democrat in the state's delegation. The shapes have been added back to the interactive map.

Florida (28): The bottom line here is that the courts are deciding which of two maps will be effective in 2022. Either is likely to result in a multiple seat gain for Republicans. There is the plan initiated by Gov. Ron DeSantis (R) and approved by the Legislature in April. The other map would only affect Districts 2-6 across the northern part of the state. 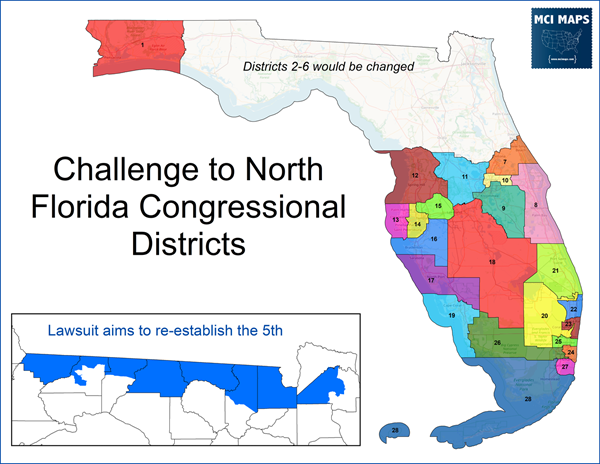 The enacted map was struck down in state court last week; the full ruling that followed instructed the state to use the alternate map drawn by Harvard professor Stephen Ansolabehere. The ruling was stayed on appeal, with the stay then vacated. We are now awaiting a decision by the First District Court of Appeals on which map will be used, although subsequent appeals to the State Supreme Court are possible.

While the entire map is expected to be litigated, the dispute for 2022 largely centers around the shape of District 5 which stretches across the northern tier of the state. It was shaped that way after court-ordered redistricting prior to the 2016 election and was intended to let Black voters elect a representative of their choice.

New York (26): The state's previously-enacted map was struck down by the Court of Appeals (the state's highest court) late last month. The Court assigned a redistricting expert, Jonathan Cervas to draw a remedial map. The first draft of his map came out earlier this week. The redrawn map is much less favorable to Democrats, who had been hoping to gain as many as three seats with the map they had enacted. It has also generated considerable infighting across the delegation as it would result in member vs. member primaries.

Not unexpected, but this NY map is pretty bad news for Democrats. With so many competitive seats, it's not hard to envision a 16D-10R (or even 15D-11R) split on a great GOP night, which is a far cry from the 22D-4R rout Dems initially tried to gerrymander. pic.twitter.com/oIZf9JZ5lL

The Cervas map was open for public comments through Wednesday. The Court is expected to implement a final map on May 20. The state's congressional primaries were moved from June 28 to August 23 to accommodate the redistricting delay.

New Hampshire (2): Republican Gov. Chris Sununu and the Republican-controlled Legislature have been at odds over a new map. Sununu wants competitive districts, while the legislators have been attempting to make both districts more partisan, with the goal of flipping District 1. The State Supreme Court has also weighed in, imposing a June 1 deadline after which the justices will draw the maps.

In response, Legislators sent a new proposal to the governor this week, which the governor is reviewing. The latest plan remains favorable to the GOP in District 1, although not to the extent of earlier maps.