The poll also simulated Ranked Choice Voting, which will be used for the first time. There were no shifts during this process - the competitive candidates were eliminated in the same order as they placed in round 1, with Adams crossing 50% in Round 12. Note that while the poll's margin of error for first choice is 3.8%, the statistical uncertainty increases with each round of ranking.

About Ranked Choice Voting: Approved for certain elections in a 2019 referendum, voters can select up to five candidates, ranking them in order of preference.  Initially, each voter's first choice is counted. If one candidate has a majority, that person is the winner. If not, the candidate with the lowest support is eliminated and the second choices on the associated ballots are redistributed to the remaining candidates. If no candidate has a majority, the process repeats until one candidate crosses that threshold.

In the table below, Round 1 reflects the first choice of voters who had a preference, undecided voters are excluded. 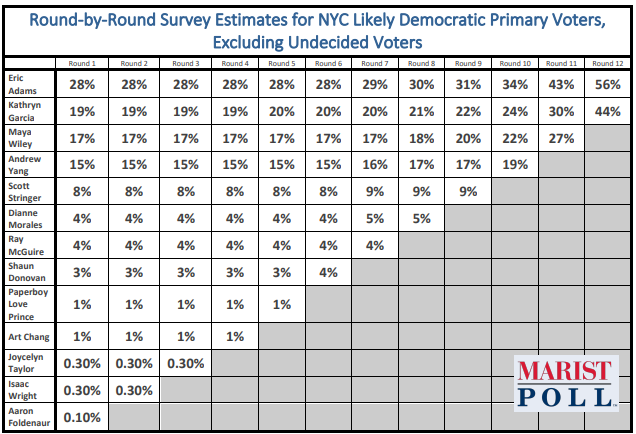 The race has undergone some shifts in recent weeks. Kathryn Garcia saw a large jump in support and took a small lead after receiving an endorsement from The New York Times last month. More recently, Maya Wiley's candidacy was helped significantly by the endorsement of Rep. Alexandria Ocasio-Cortez. Adams' support has remained the most consistent among the frontrunners. These ups and downs can be seen in the results of a series of polls from PIX11/NewsNation/Emerson College this spring: 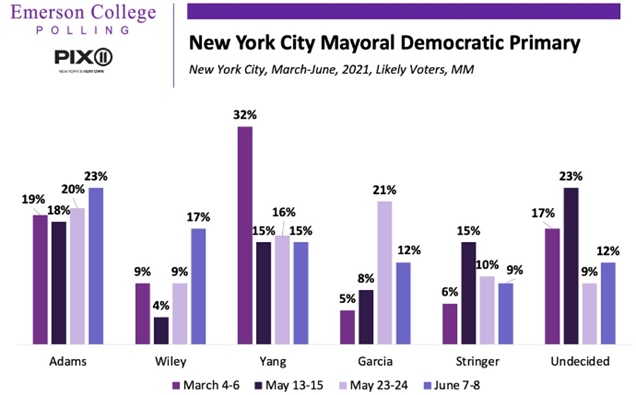 This is also the first NYC mayoral election with an in-person early voting period. That began on Saturday and will last through this Sunday, the 20th. On June 22, the polls will be open from 6:00 AM to 9:00 PM ET.

Looking ahead, we may not know the winner of this primary for a while. We should have first choice results after the polls close on the June 22. However, this will exclude absentee ballots, which, by law, cannot begin to be counted until June 28. The Board of Elections will provide initial Ranked Choice results - without absentees - on June 29 and weekly thereafter (including absentees) until all are finalized.