Mississippi holds its regular primary elections as well. We'll have results for any contested congressional races.

1 Most of the state is in this time zone. Some results may display during this hour, but no race call will be made until all the polls are closed.
2 The GOP caucuses are on a different schedule, ending at 8:00 PM local time.
3 Primary conducted by mail. This is the latest time to submit a ballot to an official drop box.

Joe Biden and Bernie Sanders should receive delegates in each contest, although it might be a close call for Sanders in Mississippi. Washington's primary is conducted by mail, with a good portion of the ballots submitted before today. This may partially explain the narrower spread vs. today's other states and the fact that the three remaining candidates only add up to about 80% of the vote.  Sanders scored dominant wins in Idaho and Washington in 2016; these states have switched to primaries in 2020 making that difficult to replicate.

For polling detail, see the Democratic nomination home page. Select a state on the map. Note that the table below reflects polls conducted after Super Tuesday, to better reflect the smaller field of candidates that remain. To see delegate information for completed contests and create your own forecast, see the interactive delegate calculator. 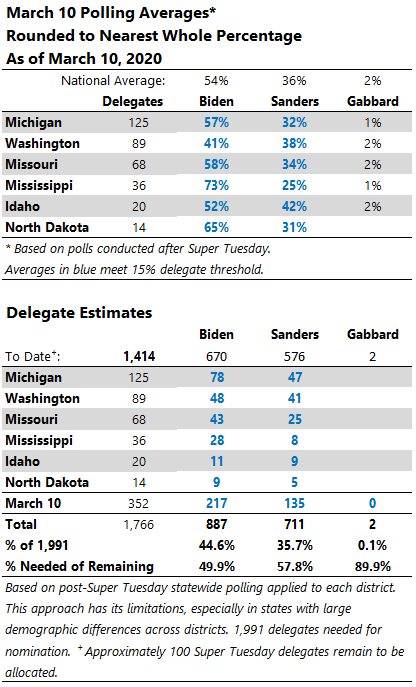 How to Watch Mini-Tuesday Like a Pro - Politico is calling this 'Mini-Tuesday' and provides a nice overview of the six states.

Michigan Overview - Why it may not prove as friendly for Sanders in 2020, despite a similar polling deficit for the Vermont Senator heading into primary day. Analysis from FiveThirtyEight.

Today's Odd Delegate Quirk - There are 51 delegate 'buckets' Tuesday, each to be proportionately allocated based on the associated popular vote. Nearly two-thirds of them are an odd number - a very high proportion.  In what is effectively a two-person delegate race, this means that a very small difference in popular vote can yield an extra delegate instead of an even split.   Analysis from Associated Press.