A Map for Those That Want to Track Possible Faithless Electors

The 538 electors will cast their votes for president on Monday, December 19th. We've had some requests for an interactive map that lets people game out the possibility of one or more 'faithless' electors in that vote. To that end, we've modified our historical interactive map code to create a preliminary 2016 version. This map lets you split any state, thus allowing for the introduction of faithless electors in one or more states. 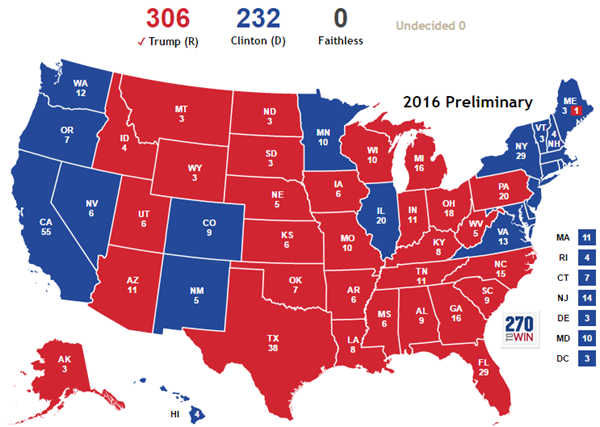 A faithless elector is one who casts their vote contrary to the candidate for whom they have pledged to vote, or one who abstains from voting. For example, Trump won Texas and thus the Republican slate of 38 electors will vote on December 19th. If one of those voted for someone other than Trump - which now seems likely - they would be considered a faithless elector. Likewise, a Washington state elector has previously indicated that he cannot support Hillary Clinton.

There have been very few faithless presidential electors, fewer than 10 since 1900 and none since 2004. (There were some additional faithless VP electors in 1912). In modern times, most electors are party loyalists, with little incentive to 'go rogue'.

Despite the long-shot odds, there is a campaign to flip 37 or more Republican electors away from Donald Trump, which would bring him below the 270 needed to win and send the election to the House of Representatives. This effort is being spearheaded mainly by a group of Democratic electors, who would support the effort by voting for a Republican alternative to Trump, thus being faithless to Hillary Clinton in the process. Those leading this process are attempting to agree on a person who, with 37+ Republican electoral votes plus some number of Democratic electoral votes, would be positioned as an acceptable alternative for consideration by the Republican-controlled House.