Clinton To Open Field Office in Utah; Trails by 20 in New Poll

The Clinton campaign is opening a field office in Salt Lake City, the USA Today reports. Although no Democrat has won the state since 1964 and Mitt Romney won by almost 50 points in 2012, the campaign sees an opportunity in the high unfavorable ratings for Donald Trump.

A new poll out today, however, shows it will be a steep climb. Public Policy finds Trump ahead by 20 points in a head-head match-up vs. Clinton. When third parties are included, Trump's lead drops to 15 points, with Gary Johnson receiving 12%. Independent Evan McMullin, who entered the race on August 10th, is at 9%. (McMullin, a member of the Mormon church, would be expected to see his best numbers in the state, where he is already on the ballot.) 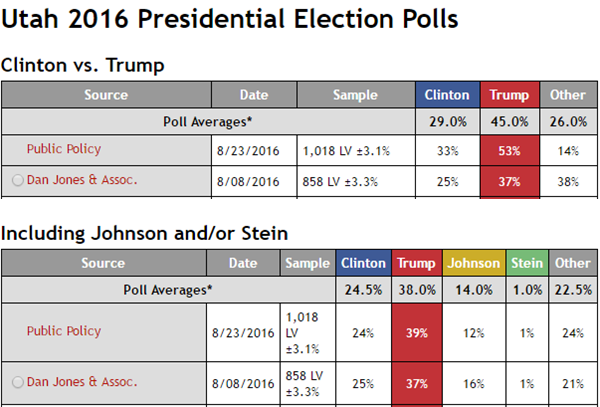