Census-driven redistricting means most Americans will cast a ballot in a redrawn congressional district beginning with their state's 2022 primary. While some districts are seeing little geographic shift, others are significantly changed. Some states have also changed the numbering scheme, meaning even relatively unaffected districts might have a new district number.

Today, we're introducing a new feature that lets you view the congressional district - before and after redistricting - for any U.S. street address.

When you first land on the page, you'll see a new vs. old comparison for the location of a randomly chosen state capitol building. Ohio is displayed in the sample image below. 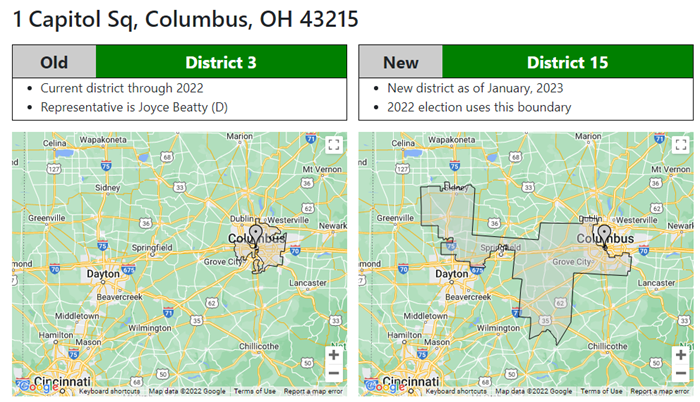 This feature is not available for states that have not completed redistricting or where the data necessary to make it work properly is not yet available. As of this writing, that list includes five states:  Florida, Kansas, Missouri, New Hampshire, and New York. It is also not particularly relevant in the six states with a single at-large district.