Gohmert is a strong supporter of former President Donald Trump. However, Trump is already spoken for in this election. He endorsed Paxton for a third term last summer, choosing to back the incumbent over Land Commissioner George P. Bush.

Under indictment for his entire tenure as Attorney General, Paxton is nonetheless running ahead of Bush in limited polling. A recent UT Tyler survey - conducted before Gohmert entered the race - showed Paxton with 46% support vs. 32% for Bush. Also in the race for the GOP nomination are former Texas Supreme Court Justice Eva Guzman and state Rep. Matt Krause, although they've gained little traction. (Krause dropped out later on the day this article was published).

It is worth noting that if no candidate gets a majority of the vote - which may be more likely with Gohmert on the ballot - the top two finishers will meet in a May 24 runoff.

Gohmert's District 1 is in the eastern part of the state, ending at the Louisiana border. It is a very conservative area; Gohmert won his 9th term by 73% to 27% over Democrat Hank Gilbert last November. While the district's boundaries are shifting slightly in redistricting, its partisan lean, calculated by FiveThirtyEight, remains at R+50.

The image below is of the current district. 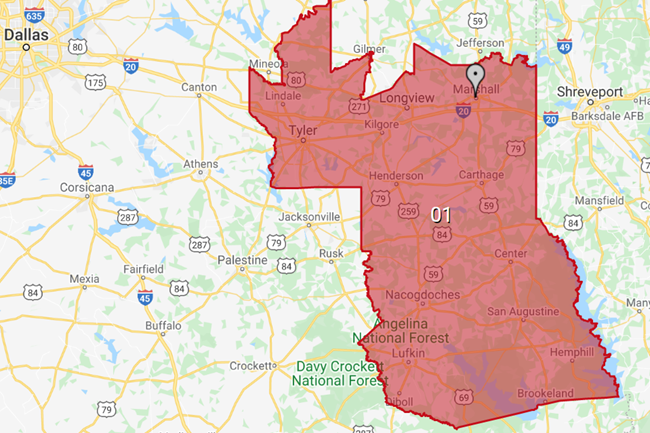 28 current House members, including 17 Democrats and 11 Republicans, have said they are retiring or seeking another office next year. Four of those are from Texas, including Gohmert's fellow Republican Kevin Brady (TX-8) and Democrats Eddie Bernice Johnson (TX-30) and Filemon Vela (TX-34).