The following states hold their regular primary elections as well. We'll have results for any contested Senate, House or gubernatorial races.

Arkansas also has non-presidential primaries; there are no contested races we are tracking.

There are two new surveys for each of the 14 states that vote today. This gives us more information, particularly in places where polling was minimal or non-existent. The smaller field is likely to increase the number of candidates hitting the 15% threshold in several states, which will flatten the distribution of delegates.

For polling detail, click or tap the image below and select a state on the linked page. 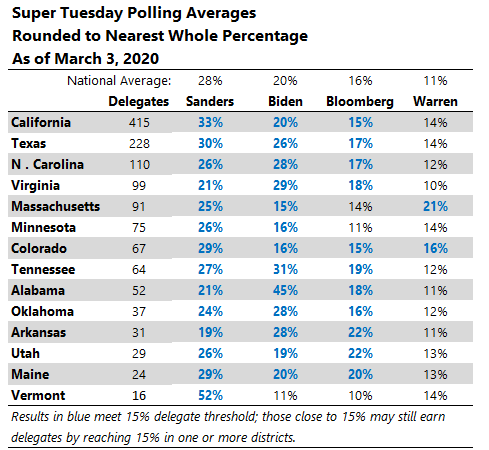 Click or tap the image below for the interactive delegate calculator. 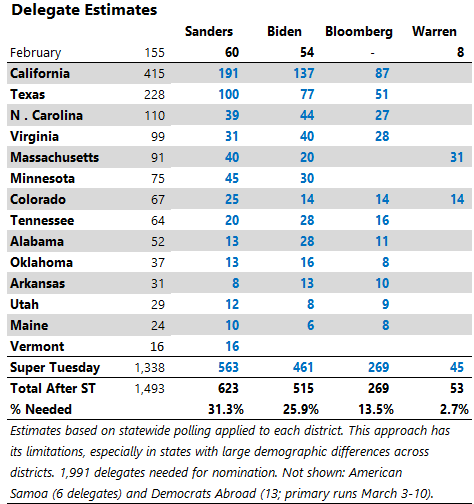 How to Watch Super Tuesday Like a Pro - This Politico article succinctly analyzes the Democratic presidential primary in each state.

California Overview - Sanders is likely to win the overall vote here, but this demographically diverse state will likely yield more split results in the 53 districts that combine for 271 delegates. Analysis from FiveThirtyEight.

Slow Results from the West - Several western states have largely transitioned to vote-by-mail. While it may mean more voter participation, it can slow the results.  Article from NPR.

Congressional Races to Watch - Jeff Sessions wants his old job back, as do a few other familiar names. Two incumbents in Texas are facing competitive primaries.  Analysis from Roll Call.