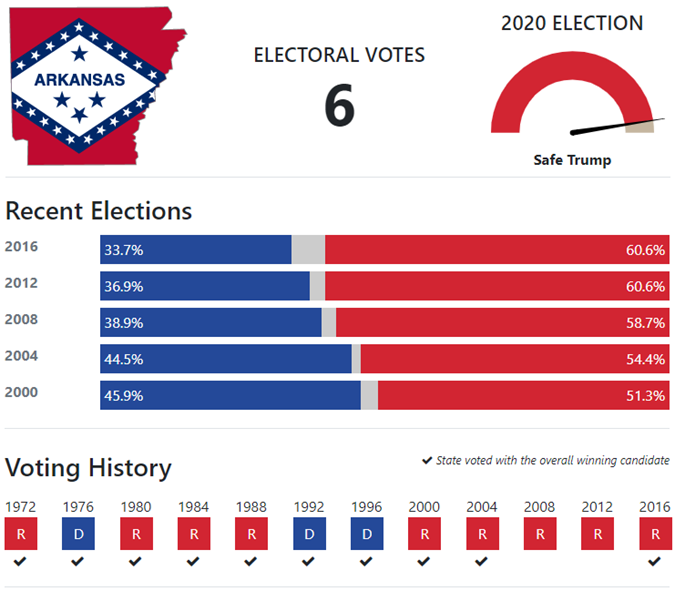 From statehood through 1964, Arkansas was one of the most reliably Democratic states in presidential elections. Since then, however, it has only voted Democratic three times. Two of these three were for native son Bill Clinton, in 1992 and 1996. The other Democrat to carry the state was fellow southerner Jimmy carter in 1976. The state’s flip from Democratic to Republican stems from a political legacy of slavery and regional factionalism.

Arkansas was first explored by the Spanish in 1551. French explorers arrived 130 years later, which led to missionaries and traders settling in the region in the 18th Century. France claimed the territory from the mid 1600s through 1772 as a part of Louisiana, or New France. Spain then controlled the territory for 29 years until they returned it to France in 1800. In 1803, territory including what is modern-day Arkansas would be acquired by the United States as part of the Louisiana Purchase.

Arkansas entered the Union as a slave state. Like most of the south, Arkansas was dependent on agriculture and the associated economics of forced labor, bringing it tightly into the pro-slavery Democratic Party. The state cast its electoral votes accordingly from its first election in 1836 through 1860. In 1860, however, the Democratic Party split between pro-slavery Southern Democrats and the northern Democrats. Arkansas, along with most of the South, voted for the pro-slavery Southern Democratic nominee while northern Democrats supported Stephen Douglas. The division allowed the abolitionist Republican Abraham Lincoln to win the Electoral College with just 40% of the popular vote.

Arkansas did not secede from the Union immediately following the election. It wasn’t until April, 1861, when President Lincoln tried to enlist Arkansans to suppress a rebellion in South Carolina, that Arkansas seceded. Arkansas became the first state admitted back into the union on June 22, 1968 after it passed a new Constitution that temporarily disenfranchised former confederates and ratified the 13th and 14th Amendments. The new document would ostensibly lead to universal male suffrage and equality before the law, but racial and economic discrimination remained.

In 1868, largely due to the voting restrictions placed on former confederates, Arkansas voted for Republican Ulysses Grant. This was the only election out of the state’s first 31 in which it would cast valid electoral votes for the Republican. While Grant would again win the popular vote in Arkansas in 1872, the state’s votes were not counted due to voting irregularities.

From 1876 through 1964, Arkansas voted Democratic. Voter suppression helped Democrats in the post-reconstruction years.  This first took the form of the Klu Klux Klan and voter intimidation. Later, in 1891 and 1892, it was a poll tax that disenfranchised poor blacks and whites. Between the 1888 and 1892 elections, turnout fell in Arkansas from 157,000 to 148,000 with the Republican vote total dropping by 13,000 while the Democratic total grew by 2,000.

A Turn to Republicans

Like the rest of the South, Arkansas stuck with Democrats. It often did so by enormous margins. Franklin Roosevelt carried the state by 73%, 64%, and 58%, and 40% margins in his 1932, 1936, 1940, and 1944 elections. It wasn’t until 1956 that Republicans would come within single digits. Democrats still managed to carry the state through 1964, even with these smaller margins and more competition.

The Democratic streak finally broke in 1968. George Wallace, the former and future Democrat from Alabama, broke with his party and ran as the American Independent Party’s pro-segregationist candidate.  Wallace won the plurality of the vote (39%) in Arkansas, and with it, the state’s Electoral College votes.

From 1968 through 2016, Arkansas would only vote Democratic in three more presidential elections. In 1976 it would overwhelmingly support fellow southerner Jimmy Carter. In 1992 and 1996, another Democrat would again leverage his southern charm to win the presidency. This time, however, that candidate was the state's very own governor. Bill Clinton carried his home state in both 1992 and 1996, beating George H.W. bush by 18% in 1992 and Bob Dole by 17% in 1996.

Even though Arkansas voted overwhelmingly for Clinton — it was the only state to give Clinton a majority in 19921 1Independent candidate Ross Perot received about 19% of the national vote that year. Aside from Arkansas, each of the 50 states was won by a plurality. — these elections marked the end of the road for Democratic presidential candidates in the state.

In 2000, Republican George W. Bush beat Democrat Al Gore by 5%. This margin would expand in every subsequent presidential election. Since 2000, Arkansas has trudged rightward in every presidential election without regard to the national environment. The biggest rightward jump was between 2004 and 2008, when John McCain doubled George Bush’s margin of victory from 10% to 20%. In those same years, the national popular vote shifted nine points in Democrats' favor. The same is true of 2012 and 2016 — even as the national environment became more Democratic, the Republican nominees expanded their margins in Arkansas. Finally, in 2016, Donald Trump beat Hillary Clinton 61% to 34%, a 27% margin.

Until recently, Democrats regularly won downballot elections here. From 2003 through 2010, Democrats held both Senate seats and three of four House seats. The party also held the governorship from 2007 through 2014. Arkansans were willing to split their ballots and vote for Democrats even as they voted Republican for president.

It’s not surprising that Arkansas has become decisively Republican. The state’s demographic makeup neatly aligns with that of the party at this point in time.  The state is whiter, more rural, and less college educated than the country as a whole. The party’s key demographic base — non-college educated whites — make up 60% of the population. Economically suffering, rural regions of the country — of which Arkansas has many — were particularly receptive to Donald Trump’s “Make America Great Again” brand of populism.

While Democrats were once able to compete throughout the entire state, their support is now isolated to Little Rock and some counties on the eastern border. Back in 1996, Bill Clinton won all but 9 counties in the state, including the states rural, less dense regions. Twenty years later, Hillary Clinton only won eight counties while Donald Trump carried 77. Trump improved upon Mitt Romney’s margins in nearly the entire state, but he did so by the greatest margins in the northeastern corner of the state.

Clinton meanwhile, outperformed Barack Obama in four urban and suburban counties. Pulaski and Faulkner Counties, which include Little Rock and its northern suburbs, shifted leftwards. So too did Benton and Washington Counties in the northwestern corner of the state. Donald Trump still outran Clinton in Benton, beating her by 40%. Washington County, home to Fayetteville, went to Trump by 10%, closer than Romney’s 16% margin. Overall, Arkansas has followed the national trend of rural regions shifting rightward and urban ones moving left.

Other southern states like Georgia, North Carolina, and Texas have deep blue urban centers that offset Republican-leaning rural regions. As these cities and their suburbs have grown and become more Democratic, the states have shifted towards battleground status. Arkansas has a similar landscape with its rural, white, Republican regions and the more diverse, dense, and Democratic Little Rock. Unlike these other southern states, however, Little Rock is not large enough to balance the state’s rural population. Unless Little Rock becomes a demographic and political powerhouse on the scale of Atlanta or Charlotte, or until the current party coalitions break down, Arkansas will remain with the GOP. With such a shift all but impossible before November, Arkansas is safely Republican.