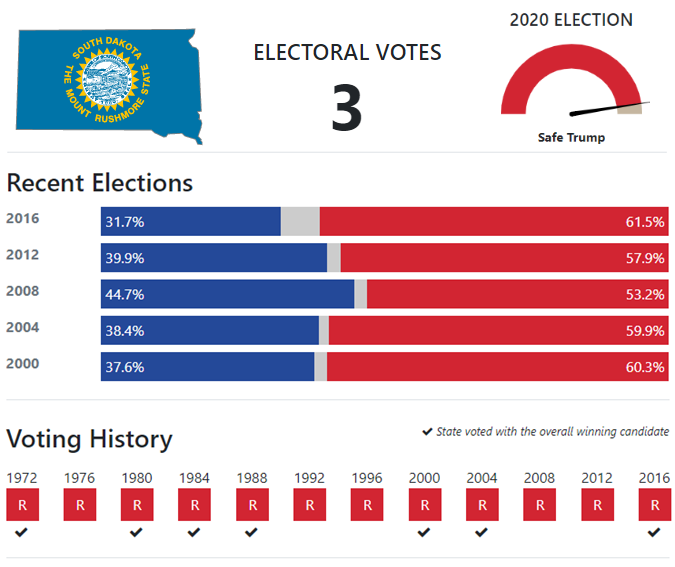 South Dakota has produced some of the most influential Democrats of the last half century. Tom Daschle served as the Senate Majority Leader from 2001 to 2003. The 1972 Democratic presidential nominee, George McGovern, was a former South Dakota Senator.

The state, however, has voted Republican in nearly every presidential election in its history. Democrats have only won here four times, most recently in 1964. However, the state’s populist character has allowed downballot Democrats to win favor with rural communities even as it repeatedly voted Republican for president. This populism traces back to 1892, the first presidential election in which South Dakota participated. First, though, we’ll look at the state’s pre-statehood era.

South Dakota and North Dakota share much of the same history. The following is from our article on North Dakota:

“Congress originally organized the Dakota Territory in 1861. It was primarily composed of land acquired from France in the 1803 Louisiana Purchase. During the early and mid 1800s, the U.S. traded with, repressed, and eventually drove out Native Americans in the territory.

Both North and South Dakota entered the United States on November 2, 1889, becoming the 39th and 40th states, respectively. Regional differences, as well as disputes over a future capital, pushed the formation of two independent states.”

The population continued to grow as railroad expanded through the region allowing easier travel and transport of goods. Construction on the railroad began in 1872 and spread quickly. The population would continue to grow through the 1920s as miners came for gold and homesteaders settled on open farmland. Population peaked in the 1930 Census with nearly 700,000 people.

As with much of the country's westward expansion, South Dakota's early growth often came at the expense of indigenous people. A particularly infamous example, the Wounded Knee Massacre, took place little more than a year after statehood. It marked the climax of federal efforts to repress Indian tribes of the Great Plains.

From its first election in 1892, South Dakota has leaned Republican. Most South Dakota settlers had come from the Midwest or New England. These northerners were natural Republican constituencies, a relic of the Civil War.

The state also had a populist streak. This was due in part to its agrarian character. In 1892, the Populist and Republican parties rallied around Free Silver, a policy to increase the money supply and help indebted farmers. Democrats wanted to stick to the Gold Standard.  The Populist and Republican candidates received a combined 87% of South Dakota’s vote. Again in 1896, South Dakota voted for the populist Free Silver candidate, although this year the parties had flipped. The Free Silver candidate was Democrat William Jennings Bryan. He edged out Republican William McKinley by less than 1%.

Outside of these election in which the currency question was paramount, South Dakota has been reliably Republican in presidential elections. It would only vote for three more Democrats after 1896.

In 1912, South Dakota was the only state without the Republican Party’s official candidate, William Taft, on the ballot. Progressives controlled the state party and decided not to offer a slate of electors for Taft. They instead decided to put up electors for Theodore Roosevelt who had recently split with the Republican Party and was running as a third-party candidate. South Dakota was the only state in which Roosevelt received a majority of the popular vote.

After 1912, South Dakota voted Republican until 1932. From 1920 through 2016, North Dakota and South Dakota would vote the same way in every presidential election.

Like other agriculture-heavy states, South Dakota suffered during the Great Depression. A farming crisis in the 1920s had already weakened the state’s economy and the ensuing depression exacerbated the problems. In 1932, South Dakota voted for Franklin Roosevelt and his New Deal which promised government assistance. South Dakota ranked 7th among the states for per capita spending by New Deal programs.

In 1940, Midwestern native Wendell Willkie was able to win back rural, small town areas in the Northern U.S. Through these victories, he was able to bring South Dakota back to its Republican roots even as he lost the election to Roosevelt. From that year on, with the exception of 1964, South Dakota would vote Republican in every presidential contest.”

While South Dakota did vote Republican consistently, it was not always by large margins. In 1972, 1976, 1988, 1992, and 1996, Republicans only won South Dakota by single digits. The state’s voters also frequently split their ballots and elected downballot Democrats. In 1962, South Dakota elected George McGovern to the Senate — a seat he held through 1981. The state also elected Democratic Senators James Abourezk, Tom Daschle, and Tim Johnson who held office from 1973 to 1979, 1987 to 2005, and 1997 to 2015. Democrats had similar downballot success in the House.

Even so, South Dakota was still red on the presidential level. The state even voted against its own senator, George McGovern, in 1972. Like North Dakota, South Dakota’s agrarian populism allowed Democrats who promised to help struggling rural communities win down-ballot even as Republicans dominated presidential politics.

In the 1980s, South Dakota began to change. Drawn by low corporate taxes and less regulation, companies began to build branches in Sioux Falls. The city’s first big catch was Citibank in 1981. A financial sector sprung up in the city as other banks including Capital One and Wells Fargo made the same move. Soon other industries with ties to the financial sector — including pharmaceutical and cybersecurity — developed. Amy Sullivan and the National Journal write that the “presence of Citibank in Sioux Falls has played a significant role in transforming a once sleepy agriculture-dependent town into a growing regional powerhouse with a number of thriving industries outside the financial sector.”

In 1980, Sioux Falls had just over 80,000 residents. Now it has reached nearly 200,000.  This influx accounts for much of the state’s overall growth. The state’s total population has grown from just under 700,000 to around 900,000 in the same 40-year period. As in other states, people are leaving South Dakota’s rural regions to live in the more densely populated urban areas.

Even with the banking boom, agriculture, mining, and manufacturing are still major employers in the state. Perhaps its unsurprising that a state composed of blue collar, rural communities and a city dependent on low regulation and taxes has shifted decisively towards Republicans.

The 2000 election was a tipping point for South Dakota. While the Republican margin in 1996 was just 3%, in 2000, Republican George Bush defeated Al Gore by 22%. Al Gore’s brand of liberalism and environmentalism was not popular in much of the Mountain West, including South Dakota.

While Obama had won 16 counties in 2008 and 10 counties in 2012, Clinton won just 5 in 2016. Trump improved upon Romney’s margins in every county in the state. The president’s cultural conservatism and economic populism appealed to South Dakotans.

Until recently, Republican victories at the top of the ticket have not prevented Democratic success downballot. As recently as 2008, a Democrat won the state’s only House seat. As politics has become more nationalized and partisan, this ticket splitting has stopped. No Democrat has won a statewide election since that 2008 House race.

This November, South Dakota will elect a president, senator, and representative. Anything other than a Republican trifecta would be a major surprise. Outside of a complete party collapse, South Dakota is safely Republican.

However, before we get to the general election, we go through the nomination process. This kicks off, as it has since 1972, with the Iowa caucuses next Monday. South Dakota and Nebraska, which both share a border with Iowa, go much later in the calendar. While the geographic difference is small, the gulf in attention from presidential aspirants is huge.