Sen. Bernie Sanders has taken the lead among likely Democratic caucusgoers in Iowa, per a poll released Saturday by The New York Times and Siena College. Sanders saw 25% support, a gain of 6 points from the last Time/Siena poll conducted in late October.  That gain appears to have come at the expense of another progressive, Sen. Elizabeth Warren. The only other notable change in the race was a doubling of support - to 8% - received by Sen. Amy Klobuchar. 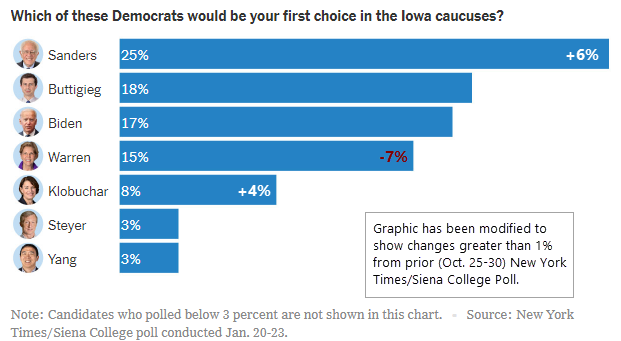 Sanders also led the CNN/Des Moines Register Poll released January 10. This poll, conducted by Selzer & Company, is generally considered the 'gold standard' of Iowa polling. Former Vice-President Joe Biden has led a couple other polls in the interim, with the net being that the two are basically tied in the overall Iowa polling average.  Note that the final pre-caucus poll from Selzer & Company will be released next Saturday, February 1, at 9:00 PM ET. The reveal will be broadcast live on CNN.

The Times/Siena poll also surveyed Iowa registered voters for the November election. President Trump was ahead in each tested match-up. He leads former South Bend mayor Pete Buttigieg (by 1%), Biden (2%), Klobuchar and Warren (5%), Sanders (6%) and former NYC mayor Mike Bloomberg (8%). The Buttigieg and Biden results are within the margin of error.