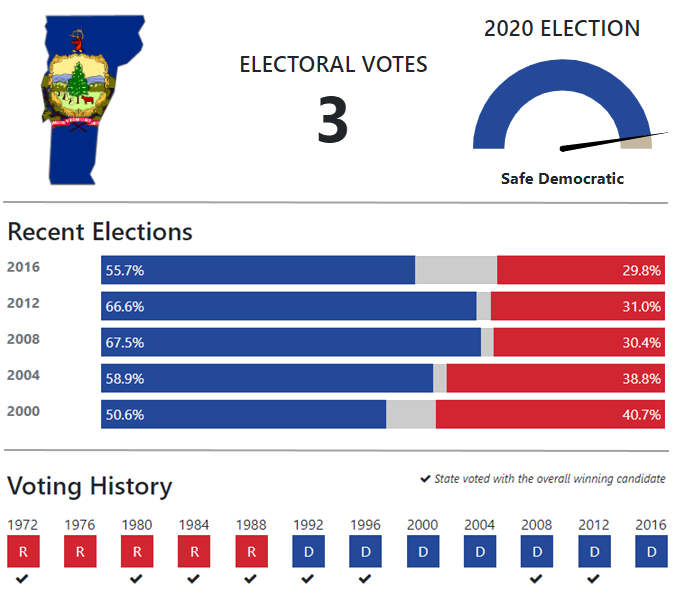 Vermont, now heavily Democratic, was once fertile Republican territory. The first presidential nominee of that newly formed party received 78% of the vote here in 1856. The state would vote with the GOP for the next 26 elections. That single party streak is the longest in American history. Between 1856 and 1988, the state only voted once for a Democratic nominee.

Vermont has often been an anomaly. Its state legislature was the first to legalize same-sex marriage and recreational marijuana use. It was one of just two states to resist Franklin Roosevelt’s 1936 landslide. This nonconformist tradition traces back nearly four centuries, before Vermont was called Vermont.

Though Vermont is now a part of New England, it was the French who originally settled here. The French explorer, Samuel de Champlain, was the first European to reach the territory and he claimed it as a part of New France. It was over a half century later, in 1666, that the first permanent settlement would actually be built.

French control continued until the territory was relinquished following the French and Indian War. The Treaty of Paris in 1763 ended French rule and handed the colony over to the British.

Later that year, New Connecticut renamed itself Vermont. From the beginning, Vermont was ahead of its time. Its original constitution abolished slavery and instituted universal male suffrage.

After Vermont settled residual New York land claims and ratified the U.S. Constitution, it was admitted to the Union on March 4, 1791. It was the first state created outside of the original 13 colonies and was admitted as a pair to Kentucky in order to continue the balance of political power between north and south.

Three periods in the state’s political history were especially formative. First is the development of the Republican Party; second is that party's dominance from 1856 through 1988; third is the late 20th century shift to staunchly Democratic. We’ll first look at these three eras and then get to Vermont’s contemporary political landscape.

The Development of the GOP

Vermont’s political identity as a loyal Republican state traces back to the Anti-Masonic Party. The party opposed the Masons, a secret fraternal society that was seen as subversive and antidemocratic. The Anti-Masonic Party was the United States’ first major third party and found the most success in Vermont. In the 1832 presidential election, Vermont cast its seven electoral votes for the Anti-Masonic Party candidate, the only state to do so. The party quickly broke down as the Masons began to lose influence and fear of the group faded.

After the Anti-Masonic Party’s decline, many of its members joined the Whig Party. The Whig Party’s primary concern was shifting federal power from the Executive Branch (the president) to the Legislative Branch (Congress).  The defining issue for Vermonters, however, was slavery. They had been opposed to the practice going back to the 18th Century. The Whigs, while not explicitly an anti-slavery party, better reflected the abolitionist position of the population than the Democratic Party of that era. The state was pushed further into the Whig camp due to ethnic polarization; Protestant farmers, of which Vermont had many, broadly favored the Whigs. From 1836 to 1852, Vermont voted for the Whig Party in each presidential election. 1

1These five elections represent the entire history of the party in presidential elections. Two Whigs were elected, William Henry Harrison (1840) and Zachary Taylor (1848). Both died in office.

The Whig Party fractured before the 1856 election over the question of slavery. In its place came the Republican Party. The new party, formed primarily as a vehicle to oppose slavery, attracted abolitionist Whigs and took hold in Vermont for over a century. Unlike some coastal states, Vermont did not have significant trade ties to the South. This made it even less friendly to the Southern economy and its reliance on slavery. In 1860, Republican Abraham Lincoln beat Democrat Stephen Douglas 76% to 19% here, his best showing of any state in the nation.

A Century of Republican Dominance

Vermont would continue to vote Republican for the next century. The 1912 election, perhaps better than any other, illustrates the state’s unwavering Republican loyalty. That year the Republican Party was split between its official nominee, William Taft, and a popular former Republican, Theodore Roosevelt, who ran as a third-party candidate. The divide handed Democrat Woodrow Wilson a 435-88 Electoral College victory even as he only carried 42% of the vote to Roosevelt and Taft’s combined 51%. The Republican Party’s official nominee, Taft, only won the plurality in two states, one of which was Vermont.

Jump ahead to 1932 and Vermont again votes Republican in a Democratic landslide. Franklin Roosevelt’s New Deal coalition, which brought together labor unions, city political machines, minorities, urban intellectuals and farmers, ushered in a new era of Democratic Party dominance. Roosevelt carried every state except six, one of which was Vermont. Results in 1936 were even more stark than in 1932. That year, Roosevelt won 61% of the popular vote and carried every state except two — Vermont and Maine.

Roosevelt won over city machines, labor, minorities, and white southern farmers, groups that were not heavily represented in Vermont. The state was largely made up of conservative white protestants working as farmers, factory workers, and miners, groups that didn’t fit well into FDR’s coalition.

In the 1960s, Vermont began to change. Urbanites from New York and Massachusetts began looking for a quieter life or vacation homes and Vermont was the destination. Next door, New Hampshire also became a home for these city escapees. The two states, however, took different paths of environmental regulation and taxation. Vermont put an emphasis on preserving its pristine environment. In doing so it attracted environmentalists, progressives, and younger, liberal professionals. Meanwhile, New Hampshire, with its low taxes and “Live Free or Die” motto pulled in conservative-minded newcomers.

Vermont’s vacation economy grew as people built summer homes and ski resorts. Similarly, IBM built a production and design facility outside Burlington in 1957. The facility’s success drew in other technology companies, eventually creating a small technology hub in the city.

The first crack in the state’s century old Republican dominance came in 1964. Vermont, in voting for Democrat Lyndon Johnson did not cast its electoral votes for the Republican nominee for the first time since 1856. However, that was short-lived. The state snapped back to its Republican trend in 1968 and voted for the party through George H.W. Bush’s victory in 1988.

In 1992, the new Democratic coalition overtook the old Republican guard. Since Democrat Bill Clinton’s victory that year, Democrats have carried Vermont in every presidential election.

Democrats have carried Vermont by double digits in every presidential election since 1992. In 2008, Barack Obama routed John McCain by 37%, far outpacing any recent Democratic nominee. Four years later, Obama again dominated the state, beating Mitt Romney by 36%. In 2016, Hillary Clinton beat Donald Trump in Vermont with a 26% margin. This was a decisive victory, but less commanding than Obama’s 2008 and 2012 victories.

The trend in Vermont was the same as the nation overall, with Trump improving in rural regions and Clinton in urban ones. Trump performed much better in the “Northeast Kingdom”, the three counties in the northeast corner of the state. Trump managed to flip one of these, Essex County, making him the first Republican to carry any county in Vermont since 2004. Essex County is the least dense county in the state, making it the most inclined to lean Republican.

Trump received a slightly smaller percentage of the vote than Romney in 2012. The tighter margins are mostly due to Clinton bleeding support to Vermont Senator Bernie Sanders. While Obama won 67% of the vote in 2012, Clinton only carried 57%. Seven percent of the total vote count were write-in votes, almost all of which went to Sanders.

Clinton only performed better than Obama in Chittenden County. The county is home to the state’s biggest and most dense city, Burlington. The city is more diverse than the rest of the state, in part due to being a major resettlement city for refugees and is home to a growing technology sector.

Gallup Polling recently labeled Vermont the 3rd most liberal and the least religious state in the nation. The state has a Democratic-Socialist Senator, Bernie Sanders, who flattened Hillary Clinton in the 2016 primary by 86% to 14%.

Vermont also broke progressive ground in legalizing same sex marriage and recreational marijuana use. The state has strict environmental regulations and passed its own Clean Air Act. As of 2014, Burlington reported that 100% of its energy comes from renewable sources. The state even has a land trust that buys farmland in order to slow the collapse of local, family owned farms.

These progressive achievements seem contradictory to recent Republicans successes in Vermont. The state had a Republican governor from 2003-2009, years when Democrats easily won the state in presidential elections. The current governor, Republican Phil Scott, won his race in 2016 as Clinton carried the state by 26%. Scott won re-election2 in 2018 by 15%.

2 Vermont and New Hampshire are the only states with a two-year term for governor. 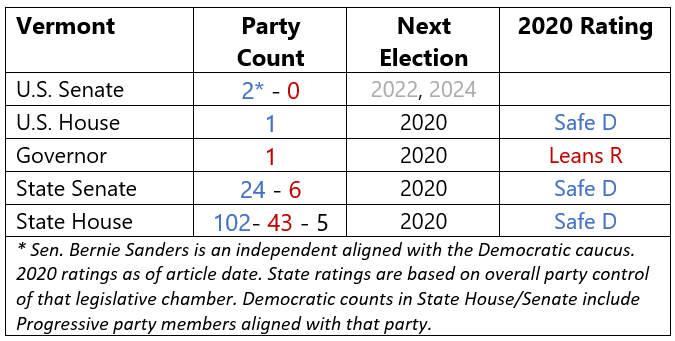 The GOP success is largely due to the type of Republicans that run in the state. Vermont Republicans are notoriously moderate. Governor Phil Scott brands himself as a fiscal conservative and social moderate. He’s a pro-choice Republican who supports same-sex marriage and backed the impeachment inquiry into President Trump.

Vermont’s idiosyncratic political landscape is also partly responsible for Republican success in a deep blue state. The state does not have party registration and holds open primaries, which can weaken voter loyalty and party ties. The state is also small in size and population. With only 620,000 people and 9,200 square miles, retail campaigning is easier and candidates can personally interact with a critical mass of voters.

As the country becomes increasingly polarized by demographics, Vermont could continue the rightward drift that was evident in 2016. The state’s white, aging, and rural characteristics could make it a long-term target for Republicans. Even with this trend, though, Vermont is safe for Democrats in November. The Democratic nominee is all but certain to win the state and will likely do so by a wide margin.