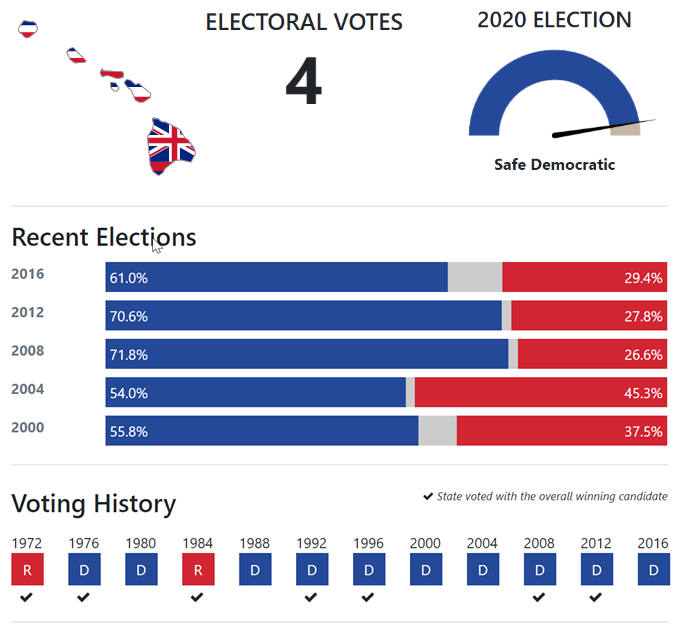 Each of the past three presidential elections has seen Hawaii give the Democratic nominee their largest margin of victory of any state. The trend started in 2008 when the state’s most famous son, Barack Obama, was the party’s nominee.

But Hawaii hasn’t always been the Democratic stronghold it is today. In fact, the state was accepted into the Union because it was expected to lean Republican. Before looking at this modern history, it’s important to understand how an island in the Pacific Ocean, 2,000 miles off of the continental U.S., became a state at all.

Polynesians first discovered the Hawaiian Islands around 500 A.D. Until the 19th Century, Hawaii was a collection of kingdoms formed on separate islands. Kamehameha I, a religious leader of royal descent, began to unify the islands in 1795, creating the Hawaiian Kingdom. The unification was complete by 1810.

The new kingdom quickly integrated with the rest of the world. Trade with Pacific neighbors — the United States and the Far East countries — boomed. Whalers and missionaries came in 1820, and the kingdom’s global economic ties progressively deepened. Along with these other economic endeavors, sugar cane production was especially influential in strengthening the United States’ relationship with Hawaii.

The sugar industry was dominated by white missionaries who saw a financial opportunity on the islands. Starting in 1851, they began to invest and take over sugar plantations. This would eventually lead to a sugar dynasty and the “Big Five” companies that controlled much of the sugar industry as well as economic and political life on the islands.  In 1874, King Kalakaua was elected over Queen Emma largely because of his support from the sugar industry. Kalakaua supported reciprocity between the United States and the Hawaiian Kingdom. Queen Emma did not, something that became a sticking point for sugar magnates.

After Kalakaua’s election, the sugar industry still wanted more. U.S. annexation of Hawaii would mean a complete and unthreatened free market into which they could export their sugar. This economic potential, along with their distaste for the nationalistic Queen Liliuokalani — the sister of King Kalakaua who ascended to the throne following his death — pushed the American minister of Hawaii to carry out a coup. In 1893, the minister, with the help of 150 U.S. marines, removed Liliuokalani from power. Two weeks later, Hawaii became a U.S. protectorate.

To the frustration of the sugar industry, President Grover Cleveland refused to annex Hawaii and the islands remained a Republic for the next five years. Finally, in 1898, the sugar industry got what it wanted when William McKinley annexed the islands. The Hawaii Organic Act of 1900 closed the door on autonomy, officially designating Hawaii as a territory of the U.S.

After annexation, the United States began to build up Pearl Harbor’s ship capacity. In 1908, America established the Pearl Harbor Naval Shipyard, setting the table for one of the most important events in American and Hawaiian history.

In response to Japanese aggression in Manchuria and China leading up to and during World War Two, the United States began to build up its military presence in Hawaii. Japan’s attack on Pearl Harbor in 1941 — sinking or destroying six U.S. ships, killing over 2,400 U.S. personnel, and drawing America into World War II — highlighted the importance of the U.S. military presence in the Pacific.  Rather than retreat from the islands after the attack, the U.S. military rebuilt and expanded Pearl Harbor and the Hickam Air Force Base, which was built by the Army Air Corps in 1934. Before the attack, in 1940, there were 28,000 U.S. personnel on the island. By 1944 there were 378,000.

Most of these personnel left the island after the war, halting economic growth from 1945 to 1949. However, as air travel became more accessible and military members spread the news of beautiful Hawaii, tourism boomed. The military presence in Hawaii was again crucial during the Korean and Cold Wars as it eased access and transportation to Southeast Asia and the Middle East. The military presence grew from 21,000 to 50,000 between 1950 and 1958.

Hawaii’s economic and strategic importance to the United States brought questions of statehood. Through most of the 1950s, Southern Democrats who opposed integration and believed Hawaii would further the cause of Civil Rights successfully delayed Hawaiian statehood. A compromise between the two parties led Congress to admit Alaska and Hawaii together in order to keep partisan balance in the Senate and Electoral College. At the time, Hawaii was expected to lean Republican while Alaska was expected to be Democratic. So, in 1959, Congress admitted Alaska and Hawaii as the 49th and 50th states.

From statehood through the 1980s Hawaii’s economy boomed. Tourism and agriculture were strong and the Cold War kept up a military presence on the Islands. In the 1990s, though, recession in America and Japan trickled into Hawaii. Tourism, one of the first things to go in tight-belted years, declined. Sugar and pineapple agricultural production dropped as international competition strengthened. Military spending dried up with the end of the Cold War. Economic growth fell to one third of the rest of the country and real per capita income did not grow between 1991 and 1998.

More recently, the Great Recession crushed the Hawaiian economy as the tourism and housing industries tanked. As the nation recovered, though, so too did Hawaii. At its low point in 2009, Hawaii had just 6.5 million visitors. By 2018, it had 10 million. Unemployment, which reached 7.3% in mid-2009, has fallen to 2.7%.

When Hawaii was admitted as the 50th state, it was expected to lean Republican. The Big Five sugar-producing companies still loomed over the Islands’ economy and politics and favored Republicans. In the state’s first gubernatorial election, this expectation was realized; the Republican candidate won with a 2.5% margin.

However, behind the scenes, a Democratic machine was taking shape. Over the previous 65 years, Hawaii’s sugar plantations imported laborers, mostly from Japan, The Philippines, China and Korea. This Asian-American constituency became so large that in 1950, they outnumbered Caucasians 280,000 to 124,000. The Japanese-American population was the largest, numbering 186,000.

John Burns, a Hawaiian former police officer tasked with assessing Japanese loyalty during World War II, was crucial to the Democratic takeover. His relatively sympathetic attitude towards Japanese-Americans in Hawaii during his police stint would help him build his coalition. Burns organized plantation and dock workers, unions, and Japanese-American veterans into a new Democratic Party. This coalition unified grievances against Hawaii’s politically dominant Republican Party and its economically dominant white business and plantation owners.

The Democratic machine would be just strong enough to begin winning elections as the state first voted for president in 1960. John F. Kennedy managed to edge out Richard Nixon by 115 votes that year. Thereafter, the parties would continue to sort by ethnicity, with Asian-Americans and Native Hawaiians voting Democratic and white voters and military personnel leaning Republican.

In every presidential election except the Republican landslides in 1972 and 1984, Hawaii would vote for the Democrat. But the state’s early voting history isn’t as Democratic or easy to categorize as this would suggest. 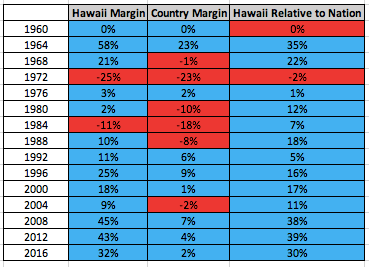 Still, Hawaii has voted more Democratic relative to the country since 1976 and has voted for the Democratic nominee in every election since 1988.

In 2008, Hawaii’s own Barack Obama won the Democratic nomination for president. While John Kerry beat George Bush in 2004 by 9%, Barack Obama dominated John McCain by 45%. Obama repeated the thumping in 2012 with a 43% margin of victory over Mitt Romney.

Hillary Clinton won Hawaii in 2016 by the wide (but not Obama-level wide) margin of 32%.

There has not been a Republican elected to statewide office since Linda Lingle won a 2nd term as governor in 2006. Only able to serve two terms per state law, she subsequently ran for Senate in 2012, a race in which she lost to current Senator, Mazie Hirono, by 25%.

Democrat Neil Abercrombie won the 2010 gubernatorial election. He proved to be incredibly unpopular, but that didn’t hurt the party’s prospects of holding the seat. In 2014, Abercrombie was defeated in a contentious Democratic primary. His Democratic vanquisher still went on to beat the Republican nominee by a safe 12% margin.

Due to its history of immigration, Hawaii has a diverse demography. Twenty four percent of the population identifies as two or more races, the highest of any state. Therefore, the following percentages will not add up to 100%.

Hawaii is composed of five counties: Honolulu, Hawaii, Maui, Kauai, and Kalawao. The chart below shows the latest Census estimates for demographics of the counties.

Honolulu County comprises the island of Oahu as well as some minor surrounding islands. Its population of one million makes it the most populous county by far, casting about 65% to 70% of Hawaii’s total vote. Of all the counties, Honolulu is the densest and most educated. It also has the highest percentage of Asians (43%) and the lowest percentage of Whites (18%).

On the other end, there is Kalawao county, which has all of 88 people. It’s the smallest county, by population, in the entire nation. In 2016, one person here voted for Donald Trump while 14 voted for Hillary Clinton.

Although Democrats have a safe hold on Hawaii’s politics, the party is not unified. A rising progressive spirit has created a rift between wings and demographics of the party.

The tension peaked in the 2014 senate primary between Brian Schatz and Colleen Hanabusa. Here’s the backdrop: Senator Daniel Inouye, a political giant in Hawaii, died in 2012. On his deathbed, Inouye asked Governor Abercrombie to appoint Hanabusa to his seat. But Abercrombie ended up appointing Schatz a few days after Inouye died. The special election was held in 2014 and both Schatz and Hanabusa ran in the primary.

Hanabusa, a descendant of Japanese immigrants, was supported by a more conservative, Asian-American and older coalition. Schatz, who is white, had a more progressive, whiter, younger base of support. Schatz won the election by under 2,000 votes.

The progressive wing of the party has continued to grow, as Bernie Sanders’ success in the state’s 2016 caucuses would show. That year, Representative Tulsi Gabbard — who is now running for president, but was then Vice Chair of the Democratic National Committee — resigned from her DNC post to endorse Bernie Sanders. That year, Bernie Sanders won 17 of the state’s delegates to Hillary Clinton’s 8.

Republicans hope that this division, along with the state’s other problems that have worsened under Democratic leadership —including high taxes, homelessness, and pension debt —will push voters to their party. But, given the Democratic guardrails of ancestral party loyalty, favorable demographics, and massive recent presidential margins, this seems unlikely in the foreseeable future. Hawaii looks all but certain to remain dark blue in 2020.