Oklahoma, while usually uncompetitive1 in presidential elections, has shaped American history and contemporary politics. Historical events seem drawn to the flat plains of Oklahoma: The Trail of Tears, the Tulsa Race Massacre, the Oklahoma City Bombing. Considering that it is home to just over 1% of Americans, the Sooner State has had an outsized influence in American politics.

The Trail of Tears to Statehood

Oklahoma’s modern history begins with the Trail of Tears. The Indian Removal Act, signed by Andrew Jackson in 1830, forced Native Americans out of the Southeast. They traveled west; most of the ones who survived the treacherous journey settled in what is modern-day Oklahoma. Over time, the 3,000 square miles on which no tribes settled became known as the Unassigned Lands.

After many attempts to open Oklahoma to white settlers by his predecessors, President Benjamin Harrison declared that the Unassigned Lands would be open to settlement on April 22, 1889. On that date, settlers literally lined up to get their chance at some territory in what became known as The Oklahoma Land Rush. At the sound of a gunshot, they rushed onto the up-for-grabs land with wagons and horses.

The Land Rush and various other cessions following the Civil War had shrunk Indian territories to what is now the eastern half of Oklahoma. A year later, in 1890, Congress passed the Oklahoma Organic Act, which designated the western half of the future state as Oklahoma Territory and the eastern half Indian Territory. The goal was to eventually consolidate the two into one state. A proposal to create a separate state out of eastern Oklahoma called Sequoia to give the Five Civilized Tribes self-governance and independence was rejected. And so, in 1907, Theodore Roosevelt signed the proclamation admitting the 46th state, Oklahoma, to the Union.

The state grew. Fast. Americans moved westward into the new territory for farmland and oil. The population ballooned from 1.5 million to 2.4 million between 1907 and 1930. Then came the dust storms. The land had been overused, eroded, and plagued by drought. Wind whipped up dust that made life uncomfortable and difficult. As chronicled in John Steinbeck’s “The Grapes of Wrath”, many Oklahomans opted to move west out of the Dust Bowl for California. Oklahoma’s population fell to 2.2 million by 1950.

During the second half of the century, Oklahoma’s population tracked with the demand for oil. The population grew quickly during the oil shocks of the 1970s, more slowly during the 1980s and 1990s as oil prices fell, and ramped up again in the 2000s as prices rose.

Recently, Oklahoma has increased its production of other forms of energy in addition to crude oil. Natural gas took off around 2003, with production nearly doubling between then and 2018. The state now ranks 4th in crude oil production,  4th in dry natural gas, and 6th  for shale gas. Shale gas, which requires hydraulic fracking, has been blamed for the spike in number of earthquakes that Oklahoma felt starting around 2009. Oklahoma, located in a wind corridor, now ranks 3rd for wind energy production. The drop in oil prices from 2014 to 2016 cost Oklahoma jobs and tax revenue, making clear that the state’s fortunes are still closely tied to the energy sector.

The New Deal and the Southern Strategy

Along with almost the entire country, Oklahoma voted for Franklin Roosevelt in his four presidential elections from 1932 to 1944. Roosevelt’s popularity and New Deal coalition was less sticky in Oklahoma than in the state’s deep south neighbors to the east. Oklahoma quickly flipped to Republicans in 1952, while most of its southern neighbors stayed with the Democratic Party until 1964.

Oklahoma briefly returned to its Democratic roots in 1964, voting for Lyndon Johnson over Barry Goldwater. But the Republican Party’s Southern Strategy — winning over white southern voters with race-based appeals — succeeded in Oklahoma. The state voted for Richard Nixon in 1968 and every Republican since.

Since 1996, every Republican presidential nominee has expanded upon his predecessor’s margin of victory. Bob Dole beat Bill Clinton in 1996 by 8%, but Clinton still carried most of the state’s southeastern counties in historically blue Little Dixie. Four years later, George Bush won with a 22% margin. He had flipped most of Little Dixie and Al Gore carried just 9 counties statewide. In fact, Gore was the last Democratic presidential candidate to win any county in Oklahoma.

Only six of the state's 77 counties were bluer in 2016 than in 2012. Five of these counties — Oklahoma, Canadian, Cleveland, Payne, and Tulsa — are concentrated in or around the urban regions of Oklahoma City and Tulsa. The sixth is Texas County, where Clinton improved on Obama’s margin by 5%, losing by a 65% margin rather than 70%. The other 71 counties all swung towards Trump. The ancestrally Democratic counties in the east and southeast swung the hardest.

Oklahoma’s Democratic identity from the first half of the century was stickier down-ballot. The state had many Democratic U.S. Senators throughout the 20th Century. Likewise, the House delegation was majority Democratic from 1933 through 1994. The 1994 midterms, known as The Republican Revolution, marked the end of a competitive Democratic Party in Oklahoma’s federal politics. Since then all of the state’s U.S. senators have been Republican and only a handful of representatives have been Democratic.

Democrats held on longer at the state level. In 2002, the party held the State House, the State Senate, and had just won the governorship. The party’s fortunes reversed quickly. They lost the State House in 2004, the Senate in 2008, and the governorship in 2010. Ever since, Republicans have had a hammerlock on state politics. As recently as 2014, though, the state had more registered Democrats than Republicans. As politics becomes increasingly nationalized, though, the Republican Party’s dominance on the presidential level has trickled down-ballot.

Republican hegemony, however, has also caused problems for the party. A New York Times headline from 2018 read, “Republican Purges and Feuds in Oklahoma Show the Pitfalls of One Party Rule.” Infighting between different wings of the party — moderate, conservative, Tea Party, evangelical — has irritated what should be a safely Republican electorate and opened the door to local Democratic politicians in urban areas. 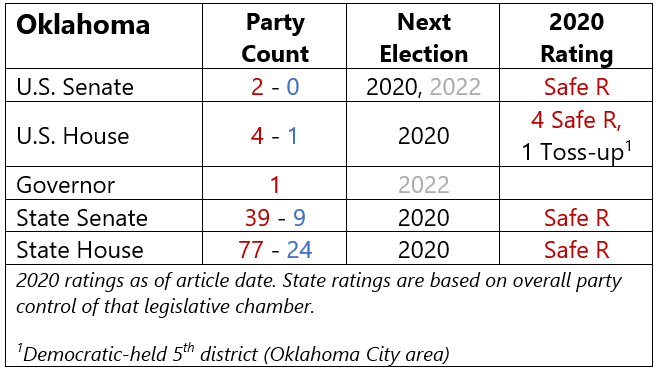 Oklahoma City, located in the center of the state, is home to 650,000 people. The next largest city is Tulsa, northeast of Oklahoma City, with 400,000 residents. These metropolitan areas, along with the northeast rural areas, are ancestrally Republican. From Oklahoma’s first presidential election in 1908 until the 2004 election, these counties usually voted more Republican than Oklahoma as a whole. This Republican bent, relative to Oklahoma overall, intensified in 1932 with FDR’s first election and lasted through 2000.  Like in the rest of the country, Oklahoma’s metropolitan areas have trended Democratic in recent years. From 2004 through 2016, these regions were more Democratic than the state as a whole.

The eastern and southeastern portions of the state were Democratic strongholds. Much of the population in this region had migrated from the more Democratic states to Oklahoma’s south and east. This part of the state, called Little Dixie, was heavily Democratic. The jobless and economically depressed voters that stayed here through the Dust Bowl latched onto FDR and the New Deal Democratic Party. Even as Republican presidential candidates were winning Oklahoma, Jimmy Carter, Walter Mondale, Michael Dukakis, and Bill Clinton all won in Little Dixie. Likewise, local and downballot elections in Little Dixie were dominated by Democrats.

But local and national forces alike have pushed Little Dixie rightward in recent years. First, Little Dixie had legendary Democratic leaders throughout the 20th Century. But as these figures left politics in the 90s and early 2000s, party loyalty waned. Second, the ancestrally Democratic voters in Little Dixie were conservative, rural, religious, and white. These voters have, on a national level, fallen in line with the Republican Party. While it may have taken them longer here, those voters in Little Dixie shifted toward the GOP as well.

The urban shift to Democrats and the rural shift to Republicans, which shuffling the underlying electoral cards, has not changed the topline presidential results. Republicans continue to win Oklahoma, as they did for most of the second half of the 20th Century.

Compared to other Republican strongholds, Oklahoma has a relatively racially diverse population. Only about 74% of the population is non-Hispanic or Latino white.

Oklahoma still has a large population of Native Americans, who make up about 7% of the state’s residents. Only Alaska and New Mexico have larger populations, by percentage, of Native Americans. The eastern and northeastern regions of the state have the highest portion of Native Americans. Oklahoma doesn’t currently have traditional Indian reservations, although a case is pending a Supreme Court decision as to whether the eastern half of Oklahoma is an Indian reservation. The questions is unanswered because Congress never explicitly revoked treaties granting land to the Muscogee Creek Nation.

And while there are differences between tribes, one study found that Native Americans favored Democrats by about 30 points in the 2018 midterms. This is a big split, but not quite as large as the gap by which Blacks and Latinos support Democrats. These groups make up 7% and 5% of the state, respectively, and are concentrated around Oklahoma City.

With this relatively diverse population, it might be surprising that Oklahoma is so overwhelmingly Republican.  But Oklahoma’s white population is heavily non-college educated. Only 27% of Oklahoma’s whites have a Bachelor’s Degree, meaning that the Republican base — non-college educated whites — make up 54% of the population. It’s also a heavily rural state, with just 55 voters per square mile. And most of this density is in concentrated in Oklahoma City and Tulsa; the rest of the state is overwhelmingly rural and sparsely populated.

Even the least competitive states on the presidential level can be important in national politics.

Elizabeth Warren, a leading candidate in the 2020 Democratic Primary, was born in Oklahoma City. Her Oklahoman origin was the center of a dust up that nearly tanked her campaign when she tried to prove her Native American ancestry with a DNA test that backfired. The kerfuffle has faded, but led to President Trump nicknaming her “Pocahontas” and could haunt her in the Democratic primary or in the general election.

Oklahoma also came into the national spotlight during the 2018 midterms when Democrat Kendra Horn won an upset in the 5th Congressional district, centered around Oklahoma City. Before Horn, the last Democrat to represent the state federally was David Boren, from ancestrally Democratic 2nd district in eastern Oklahoma. Horn beat the Republican incumbent, Steve Russell, who had won reelection in 2016 by over 20% in a district that Trump carried by 13%. Horn is now a top Republican target in 2020.

Oklahoma has a tendency to make history and shake up American politics. The state may not competitive on the presidential level, but it is still one to watch for its political quirks and down-ballot contests.

1Only seven of the state's 28 presidential elections have been decided by a margin of fewer than 10 points.