The road to an uncontested Democratic nomination requires a candidate to earn 1,990 pledged delegates1 and begins in Iowa on February 3. To that end, the first version of our 2020 Democratic Delegate Calculator is now available.  It is based on available statewide polling.  An interactive version, where you can create your own forecast, will be available in the near future.

As we launch, the display shows all candidates projected to earn delegates based on polling, as well as anyone with a national polling average higher than that of the lowest delegate-qualifying candidate.  As of now, five candidates would earn delegates based on polling: Biden, Warren, Sanders, Buttigieg and Klobuchar.  Also displayed are Bloomberg and Yang, who have a higher national polling average than Klobuchar. 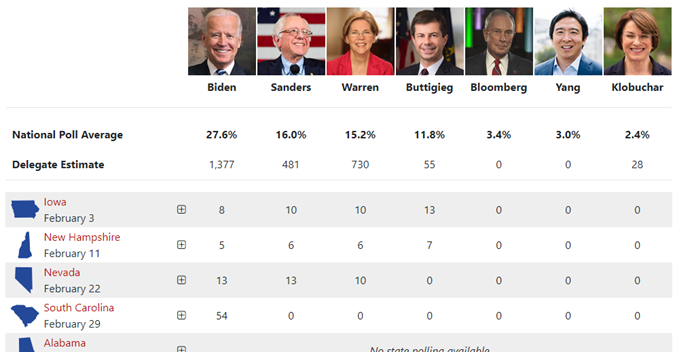 Unlike the GOP, the Democratic Party allocates pledged delegates the same way in each state. It is a proportional allocation, with a 15% minimum to qualify for any delegates. However, within each state, delegates are split into groups.  There is some variety, but in most states this means some delegates are allocated based on the statewide vote, with the remainder based on the vote within each congressional district. The 15% threshold is applied to each location, meaning a candidate who gets less than 15% statewide could still earn some delegates.