GOP Rep. George Holding of North Carolina has announced he will not seek a 5th term in 2020.

Holding is the first casualty of North Carolina's new court-approved 2020 congressional map. From the Cook Political Report's Dave Wasserman: "Talk about a 'total makeover:' under the new map, the 2nd CD sheds Republican outer suburbs and picks up all of the city of Raleigh, converting it from a district President Trump carried by 12 points to one Hillary Clinton carried by a massive 24 points - and rendering it unwinnable for any Republican."

Here is a comparison of the old and new maps, from Sabato's Crystal Ball. 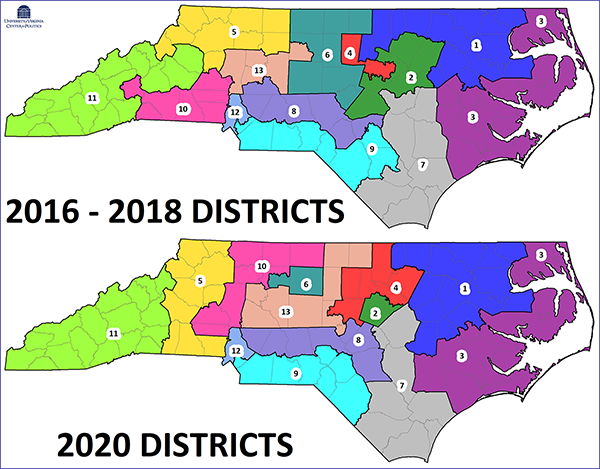 The new map is expected to net the Democrats two additional seats in what is currently a delegation of 10 Republicans and 3 Democrats. The new 6th district "unite(s) the urban Greensboro and Winston-Salem areas. In the old map these two cities were split between the 13th and 5th districts. With the shift, the 6th District would move from a Trump +15 district to Clinton +21." That seat is held by Mark Walker, now in his third term. There has been some speculation that Walker will challenge incumbent Sen. Thom Tillis in the Republican primary next year.

The new map will likely only be in effect for the 2020 cycle. Most states will redraw their districts in 2021 based on the outcome of the 2020 Census. Those new boundaries will be used beginning in 2022.

Holding is the 31st current member of the House to announce they won't seek reelection in 2020.

The 270toWin Consensus House Map includes ratings changes around redistricting as they become available.  However, the lines on the map itself are still the old boundaries. We'll have that updated in the next few days.